One doesn’t usually think about cranes when talking about dredging, but cranes form a big part of the niche business. And, even though Indusign/E-Crane Worldwide has over 200 cranes in operation since Lieven Bauwens and Geert Watteeuw partnered up over 20 years ago, they are perhaps not that well known in dredging circles on this side of the pond. The Belgian company has tons (pun intended) of experience engineering their balance cranes. During that time, their equilibrium crane has more than proven itself in the scrap industry, as half of their machines operate in scrap yards throughout the world, but the crane can handle much more than just scrap. Its popularity continues to grow in ports for handling other materials, such as coal, grain, cement and iron ore. And now, that reach includes the business of dredging.
Today, only a few E-Dredgers are in operation worldwide. Dredging is actually E-Crane’s smallest market, but one which they hope will someday yield great success. Neverthless, for projects that involve large scale dredging projects, there are better machines on the market to accomplish those missions. Where the E-Crane excels, however, is when projects that call for precise or maintenance dredging. One important advantage of the E-Crane dredger is being able to know where the grab is digging at all times, as opposed to a cable crane, where precise placement of the grab is impossible. In fact, E-Crane dredgers even have a system inside of the operator’s cab that tracks the grab placement and displays that information on the operator’s screen.

Balance & Equilibrium
The balance crane principle is simple. The “E” in E-Crane stands for equilibrium, a key feature of the parallelogram style boom which provides a direct mechanical link between the stick and the rear counterweight. There are no steel winches or cables in the design. The counterweight continuously balances the total weight of the steel structure along with half of the operational load. As the lifting radius is varied, the change in the load moment is automatically equalized by the moving counterweight. With traditional hoisting machinery, the payload, working tool, and steel construction all have to be lifted, but the E-Crane’s balance compensates for all but half of the payload. Along the way, this typically results in important energy savings.
This superior balance permits mounting on virtually any type of barge, even ones without spud poles. There are many benefits, one of which is that the balanced nature helps to minimize tipping when fully loaded. This means less barge movement which results in less friction between the floating terminal and the vessel and more precise and faster grab positioning. In other words: the arguably perfect equipment for dredging. There are numerous examples of E-Crane’s installed on barges or pontoons, but two in particular used for dredging deserve mention.

Albatros
Back in 2009, Herbosch-Kiere (part of the group Eiffage) put a new dredger into operation, called the Albatros. The Albatros is a self-propelled spud barge with a 1500B Series E-Dredger installed on it. It has a 29m horizontal reach, 15 Mton lift capacity and an 18m dredging depth. It’s immensely flexible, as the crew only has to raise the spuds and start the engines. There is no need to wait for a tow.
The Albatros puts balance to the test day after day. Even after raising the spud poles at the dredging job and lifting a fully loaded 5.5 m3 clamshell bucket to an extended position of 27m outreach above the water, the pontoon tilted by only 20cm, according to the crane operator. Spud poles are only needed to keep the barge in position in tidal waters. Beyond this, the crane operator also claims that the machine is amazingly quiet – something that can be quite useful when working closer to shore and/or near residential areas. The Albatross is also a “green machine”, operating on a 225kW (300 hp) electric motor, harnessed from the engine used to propel the barge.  This means costs for diesel can be kept to a minimum.
Notably, the Albatros has worked on projects in the port of Ostend in Belgium, in Rotterdam and in London. Currently, Albatros is being put into service preparing the seabed for wind turbines in the Swedish part of the Baltic Sea.

New dredging unit: the Titan
Remember the “extreme machine” Blockbuster in the port of Rotterdam? This state-of-the-art machine is a heavily modified E-Crane with an outreach of 63m and a lifting capacity of 50 Mton (55 UStons). This monstrous machine has a height of 30m and tips the scales at 1200 Mtons.
The original contractor, PUMA, used the machine from 2011 through 2012 for the construction of a stone dune at the Port of Rotterdam, an important part of the hard sea defense which will protect Maasvlakte 2 from the sea and from extreme “10,000 year” storms. The Blockbuster placed approximately 20,000 individual large concrete blocks into the hard sea defense of Maasvlakte 2. Each block is 2.5 cubic meters (8.2 cubic feet) and weighs more than 40 Mton. In January 2012, the Blockbuster’s work at the hard sea defense was complete.
Today, the Blockbuster has a new lease on life in the Caspian Sea. Renamed the “Titan,” the unit was in 2013 disassembled and sent back to E-Crane’s workshop for modifications to fit its next job.
Soon, the newly modified machine will become a huge dredging unit operating in the Caspian Sea, close to the shores of Kazakhstan.

E-Cranes in Service Everywhere
Overall, E-Crane boasts more than 170 cranes in operation worldwide, of which 70 of these machines operate in North and South America. In this hemisphere, the majority of these machines operate in the bulk handling marketing: barge unloading/loading, ship unloading/loading, stockpiling, etc). In Europe, the majority of the machines are used in the scrap handling industry, at scrap yards and steel mills. And now, the dredging sector is bnefiting from the superior utility that these machines provide.
Port and terminal operators are beginning to realize the benefits of the balance principle for their floating stations and dredgers. An interesting alternative to landside cranes, these floating systems are extremely flexible. From dredgers to bulk trans-loading stations, the E-Crane is an ideal solution due to its innovative and original design.
www.e-crane.com 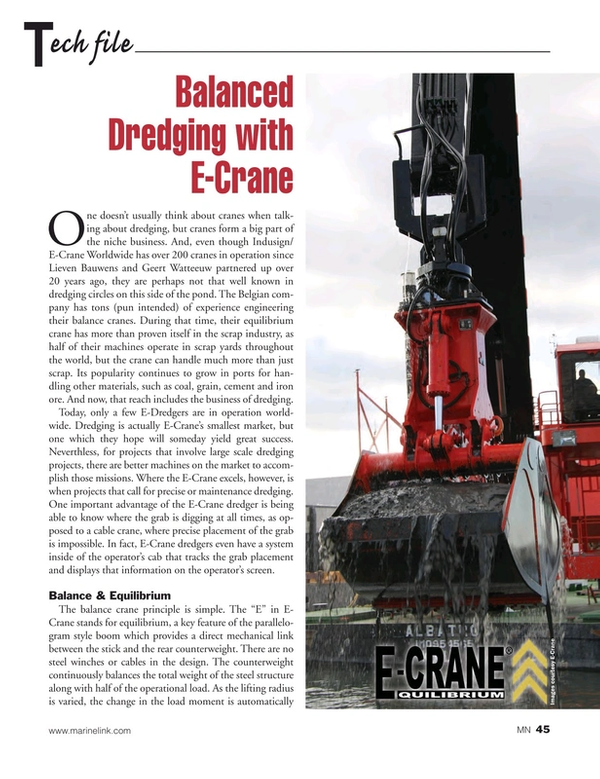