The Harbor Maintenance Trust Fund (HMTF) has been misused and underutilized for years, leaving U.S. ports and harbors in subpar conditions and disadvantaging the very shippers that pay to modernize and maintain them – to the tune of nearly $2 billion per year. In May, the U.S. House of Representatives’ (House) Committee on Transportation and Infrastructure (Committee) took a major step in the right direction by passing the Water Resources Development Act of 2016, which among other things, ensures that port and harbor infrastructure maintenance projects have access to the funding they need … in 2027.

The HMTF is funded through an excise tax assessed at identified ports on the value of commercial cargo shipped (excluding exported product), or cruise tickets sold, at a rate of .125 percent. The revenues collected are intended solely for port and harbor maintenance and modernization activities, including dredging channels, maintaining jetties and breakwaters, and operating locks along the coasts and in the Great Lakes. There is one catch: none of the money can be spent without an annual appropriation from Congress.
In recent years, Congress has appropriated less than $1 billion of the roughly $2 billion collected each year, leaving the fund with more than $10 billion in excess cash. The blame does not lie with Congress alone. The Obama Administration, which oversees the Army Corps of Engineers (the federal body that performs port and harbor projects), is tasked with sending Congress an annual assessment of port and harbor funding needs, but the administration has specifically asked Congress to spend less than $1 billion per year in each of the President’s annual budget requests since assuming office in 2009. The net result is leaving some U.S. ports and harbors in a state of disrepair, and others with insufficient depths to accommodate cargo ships used for global trade.
It is no surprise then that the American Society of Civil Engineers assigned U.S. ports and harbors a “C” grade in its most recent Infrastructure Report Card, and that the need for investment compounds with every passing day. Waterborne commerce already plays a major role in the U.S. economy, with approximately $1.4 trillion worth of goods moving through U.S. ports each year, generating $41 billion of federal, state, and local revenue annually. A nearly complete Panama Canal expansion project could push these numbers even higher – if we are ready.
The “new” Panama Canal will accommodate significantly larger ships, accommodating vessels weighing as much as 14,000 TEUs – nearly triple the maximum weight 5,000 TEUs currently able to pass through the canal. Many U.S. harbors have not been sufficiently dredged to accommodate the larger ships commonly used in international trade, not to mention the mega-ships that will pass through the newly expanded canal. If the U.S. does not invest sufficiently to deepen these harbors – especially in the Atlantic and Gulf coasts, which do not possess the naturally occurring deep harbors found on the Pacific Coast – the U.S. economy will not reap the benefits offered by such large-scale improvements.
The obvious questions then are:
These two questions share one answer: very complicated budget rules. At first blush, this seems absurd, but there are two very real obstacles to fully funding harbor maintenance projects. First, “discretionary” budget caps and secondly, statutes and rules governing “mandatory” federal spending.
By making this change effective in 2027, the Committee wisely sidestepped both politically thorny issues. The bill avoids discretionary budget caps by making the funds “available to the Secretary … without further appropriation…” This has the effect of changing how the spending is classified from “discretionary” to “mandatory.” Discretionary spending requires a specific appropriation from Congress each year, without which no funds can be spent from the relevant account. Conversely, mandatory spending is authorized to occur year after year on autopilot without Congressional approval unless and until Congress repeals such authority.
The bill also escapes statutory “pay as you go,” or “Paygo” and “cut as you go,” or “Cutgo” rules by delaying the provision until 2027. Under Paygo laws, Congress must increase revenues (read: raise taxes) or cut spending in a sufficient amount to offset any new mandatory spending authorized by legislation. Paygo applies to the U.S. Senate (Senate) and the House. Similarly, Cutgo rules, which apply only to the House, require any new mandatory spending to be matched with an equal or greater amount of spending cuts. The primary difference being that in the House you cannot use new taxes to pay for new spending.
However, these budgetary rules focus only on new spending authorized in a bill occurring in the first year, the aggregate of the first five years, and the total of the first ten years. Fiscal years 2027 and beyond are not within the scope of spending considered when applying these laws and rules (with certain exceptions) to a bill that passes in 2016. In other words, the Committee sidestepped the House budget rules by delaying the provision until 2027, outside the ten-year scoring window. Additional rules may be triggered when the Congressional Budget Office produces its official cost estimate for the bill, but for now it looks like the Committee threaded the needle.
There are a finite number of opportunities for the federal government to improve infrastructure without spending a dime of taxpayer money. This is one of them. The Transportation and Infrastructure Committee should be applauded for its creativity and its leadership on this issue. Now the full House and Senate must follow suit and pass the Water Resources Development Act with this provision fully intact. Further, Congress should ensure all port and harbor funding needs are met until this provision kicks in (in 2027) by providing the Army Corps with sufficient funding to meet all project needs so long as the cost doesn’t exceed HMTF receipts for the year.
The Author
Shane Skelton is the Executive Director of the Alliance for Innovation and Infrastructure. He can be reached at skelton@aii.org
(As published in the July 2016 edition of Marine News) 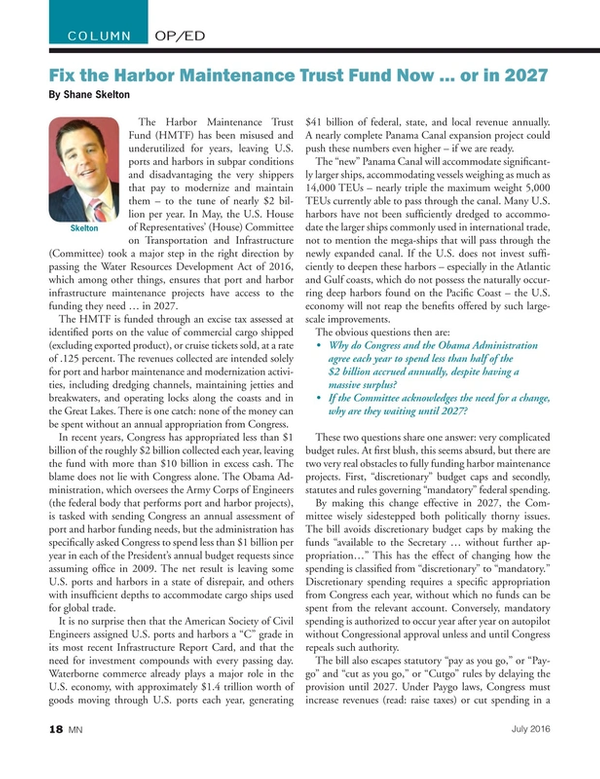