Thordon Bearings: EAL Protection in a Class of its Own

The ideal solution for the tightening regulatory noose also brings a different (and welcome) shade of ‘green’ for workboat operators.

As the US Environmental Protection Agency (EPA ramps up enforcement of regulations that mandate that all vessels over 24 meters (78 feet) operating in US waters must switch over to EALs in all oil-to-sea interfaces before their next drydocking, it is an arguably good time to be in the lubricants business. At the same time, Thordon Bearings, a manufacturer of seawater lubricated bearings for the marine industry has its own thoughts on that very topic. Specifically, Craig Carter, Thordon Bearings’ Director of Marketing and Customer Service, asks, “What is the point in shipowners investing in costly bio-lubricants when seawater is widely available and 100% free? It’s akin to paying for the very air we breathe.”

When used in conjunction with Thordon Bearings’ COMPAC propeller shaft bearing system, seawater lubricates the bearings to ensure the smooth, effective and safe operation of the vessel. Not only does As Thordon guarantees its seawater-lubricated COMPAC system for a wear life of fifteen years, it also reduces a vessel’s annual operating and maintenance costs substantially, compared to an EAL-lubricated metal bearing and two seal system. That much cannot be denied.

Thordon estimates that as much as 63 million U.S. gallons of operational oil lubricant are leaked into the oceans each year at a staggering cumulative cost to the operator, even without adding in any monetary penalties incurred by way of environmental fines.

Not everyone is sold on the concept, or the extra costs involved in installing seawater lubricated bearings. Better known in the blue water, international trades, Thordon bearings are available worldwide through over 75 agents and distributors. That said; there aren’t too many types of vessels or operating environments that Thordon can’t tackle, and certainly, momentum is building in the inland and fresh water markets – here and abroad. To that end, some recent installations auger well for a workboat sector that finds itself under pressure from a variety of regulatory and financial pressures.

Three triple-screw and one twin-screw pusher vessels have since been converted and all 15 tug/towboats are scheduled for conversion by the end of 2018. The low level of water in Colombia's waterways, an effect of the drought caused by the El Niño weather phenomenon, is a major concern for Latin American owners of workboats operating on the region’s rivers.

Jorge Luis Vélez, Manager, Delta Marine and River Services, said “By far the biggest problem with the original oil-lubricated system was the small 4mm (0.157”) clearance between the propeller and Kort nozzles. When silt or sand lodged between them, it prevented the circulation of lubricating oil, resulting in increased friction and high bearing temperatures. Ultimately, it was destroying the bronze bearing, potentially causing catastrophic damage to the shaft.”

“Since the retrofit, the RiverTough bearings and TG100 seals have been operating very successfully.

The vessel has been operating in rivers with very low water levels with high sand and silt content but the Thordon Bearings’ system has proven itself. We recently checked the bearing clearance as well as the whole system and all the components are in perfect working condition.”
The success of that first conversion resulted in Impala Terminals Colombia contracting Delta Marine and River Services for RiverTough/TG100 retrofits to a further fourteen Magdalena-operating vessels.

Delta Marine has begun retrofitting RiverTough bearings and TG100 seals to the remaining vessels, each of which will require bearings and seals for shaft diameters ranging from 165mm (6.5”) to 186mm (7.3"). Of particular concern to potential inland buyers, Thordon seals typically last the same in both salt and fresh water, as they are made from corrosion resistant bronze.

Thordon’s success on far flung inland rivers could soon bring home to domestic U.S. operators the wisdom of converting to water lubricated shaft bearings. In the meantime, the Great Lakes Fleet operators have already gone ahead with the conversion of the bulk carrier SS John G. Munson to water lubricated tailshaft bearings. Thordon Bearings carried out the conversion last year for the 26,260 DWT Great Lakes vessel.

In this instance, both Interlake and Great Lakes responded very quickly to the changes in the shipping industry and specified COMPAC to meet new US EPA environmental requirements. Other Great Lakes stakeholders are assessing the performance of COMPAC installed on the Munson with a view to converting more vessels in its fleet to water-lubrication. And, this is one place where owners get their money’s worth out of every single hull. In this market, it is safe to say that the cost of a Thordon refit is dwarfed many times over by the lifespan burden of traditional lubricants.

Eliminating the need to vet, source and purchase expensive so-called EAL lubricants probably remains as the top reason to select a Thordon Bearing solution for your commercial marine vessel, especially when it comes to newbuild tonnage. But, savvy owners who aim to operate existing tonnage longer and with greater economy also turn to the Thordon solution in conjunction with other environmental improvements to their equipment.

That comes at a cost. A Thordon open seawater lubricated bearing system with one seal is typically 15-20% more expensive than a closed EAL/oil lubricated system with 2 seals for a newbuilding. While payback periods will depend on how frequent the owner/operator performs aft seal maintenance on the oil lubricated system, the typical payback is just four years. And, while Thordon suddenly has a competitor in this sector, it also took 15 years for that to happen. Much further down the learning curve, Thordon today has more than 550 commercial vessel installations with proven wear life, using seawater lubricated bearings. No one else is even close.

Typically, operators go ‘green’ for just one of two reasons: they either grudgingly yield to the regulatory hammer or surprisingly find that there are two kinds of green to be realized. With Thordon, they can check both boxes.

DNV GL’s new voluntary TMON notation for open loop water lubricated propeller shafts follows similar rule revisions by Lloyd’s Register (LR), Bureau Veritas (BV) and the China Classification Society (CCS). Many stakeholders expect ABS to follow suit this summer. In a nutshell, and as long as certain condition monitoring criteria are met, the new rules mean that propeller shafts operating water lubricated bearings no longer need to be withdrawn for inspection every five years. There will be no pre-determined intervals between shaft withdrawal surveys. And, of course, no need to purchase another round of lubricants.

(*) This story first appeared in the July 2018 print edition of MarineNews magazine. 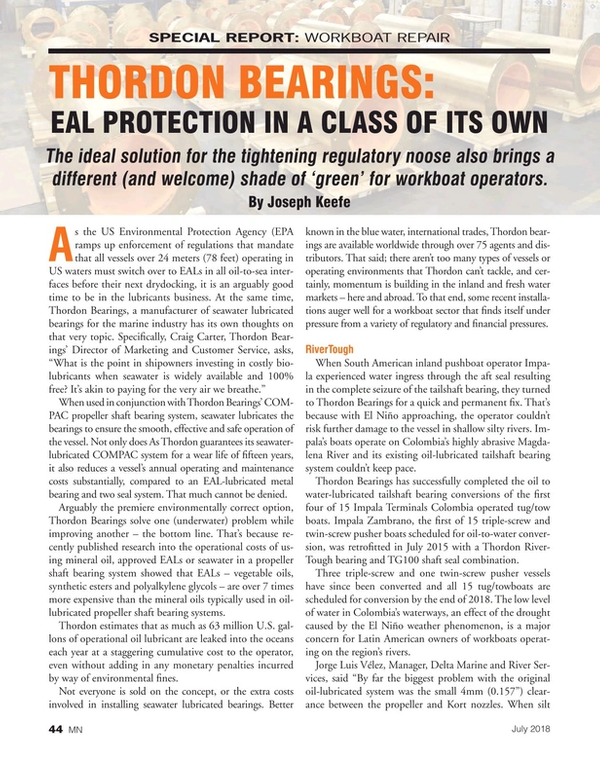 Read Thordon Bearings: EAL Protection in a Class of its Own in Pdf, Flash or Html5 edition of July 2018 Marine News