Your marine pilot of the future, here today.

With its user-centric design, ABB Ability Marine Pilot Control reduces the workload on automating navigational tasks and allows bridge officers to focus holistically on the overall control and positioning of the ship. The system integrates seamlessly with existing onboard equipment, and ensures ease of installation and maintenance. In other words, and as deep draft blue water shipping firms begin to eye futuristic autonomous solutions, ABB aims to be a big part of that push, when it comes.

Benefits
The User-centric design helps increase the overall safety of the operation, as the crew is able to maintain full situational awareness, rather than having to focus on changing control modes. The operator can switch to joystick control for maneuvering the vessel at any speed and all the way to docking. ABB Ability Marine Pilot Control employs algorithms that calculate the optimal way of executing a command for controlling the vessel in any operational situation.

Seamless integration with existing onboard equipment and ease of installation and maintenance is at the heart of the new system. Together with the advanced situational awareness provided by ABB Ability Marine Pilot Vision, the new DP system creates an intuitive operating environment with the dedicated purpose of operating the ship in a safe and efficient manner.

Stepping Stone to Autonomous Shipping
The ABB Ability Marine Pilot Control is a pioneering technology that is already available today and that will act as a stepping stone into the future of autonomous shipping. Autonomous shipping requires a DP system that can replace traditional solutions designed for disconnected operations.

Today, ABB touts itself as Electric, Digital and indeed ‘Connected.’ The new Dynamic Positioning system is all of that, but this is certainly not ABB’s first rodeo in this exciting space. Mikko Lepistö, Senior Vice President Digital Solutions at ABB Marine & Ports, explained, “We have been in the DP business in the past, but ABB Ability Marine Pilot Control provides a novel and comprehensive ship operation system that is unparalleled at the moment in the industry.”

At the same time, ABB cautions that autonomous does not mean unmanned. The ABB Ability Marine Pilot Control can be connected to the ABB Ability Collaborative Operations Center infrastructure, which monitors the performance of ABB technology on board and remotely connects operators with ABB experts. The Captain and his staff, now equipped with these high-tech tools, must be supported by the tech OEM, says Lepistö.

“The journey started as recently as 2012, when we first discussed a ‘global ticketing system’ of shared information. And it was only in 2015 that ‘Global Technical Support 24H’ delivered a common platform for data available to ABB offices and ships at sea, he said, adding, “By then, our ABB Ability Collaborative Operations Center in Norway was up and running, we had opened a second center in Singapore and we were connected to 600 vessels. Today, we have seven Collaborative Centers on locations around the world and we are increasingly connecting to more ships; by 2020, we expect to pass the 3,000-ship milestone.”

Available Now
Also in Hamburg, ABB announced that the system is being delivered to a Ritz Carlton yacht in the near future. The 190 meter, 298 passenger vessel marks Ritz Carlton’s entry into luxury yachting and cruises – bringing the award-winning luxury hotel brand’s service and timeless style to sea. That it will also employ ABB’s futuristic system promises a unique experience for its mariners, as well.

For example, the ABB Ability Marine Pilot Control can carry out berthing operations seamlessly across all phases of ship operations. By not needing to have a period of zero speed, the bridge team will be able to minimize the energy consumption of a ship by not having to stop and start during maneuvering operations. Simplifying the interface to the ship’s propulsion and thrusters permits significantly more effort to be placed on situational awareness as opposed to manual calculation of thrust vectors.

In a world where IMO’s 2020 deadline is looming large in the proverbial porthole, that also means a smaller environmental footprint for the high end yacht. That’s because faster departures will enable lower sea going speeds which will provide a direct saving for operators in both fuel and emissions.

And, for those skeptics who doubt the efficacy of this high tech system, ABB already has ‘AiP’ from Lloyds Register, and says Lepistö, they are in regular discussions with all IACS societies at multiple levels. He adds, “The AiP provides a level of assurance that there are no conceptual issues which should prevent the design gaining the necessary approvals.”

Sea Change for Dynamic Positioning
This DP mode – appealing in theory to a much larger swath of marine vessels, and indeed the traditional blue water tonnage that DP has not heretofore touched upon – also shows that a much wider group of mariners will need to get DP training. At the lower levels of DP operation, this would be at the operators’ requirements according to their Safety Management System & SOLAS compliance, and ABB is further looking at delivering this in its own training facilities. For higher level DP vessels, says Lepistö, requirements for DPO training will remain as they exist today.

Nevertheless, ABB has higher aspirations for their newest DP offering. At SMM, ABB suggested that someday, large blue water deep draft vessels might be berthed almost autonomously using this DP system. But, Lepistö cautions that autonomous docking using systems similar to ABB Ability Marine Pilot Control for small vessels are the priority for the short term in order to gain confidence in systems and identifying shortfalls. “We do believe that large vessels will benefit from this in the mid term with the caveat that we must support harbor pilots in their understanding of these systems.”

DP operations intended to support complex docking operations will need to go beyond today’s offerings. To that end, ABB’s Ability Marine Pilot Control is more than traditional DP. With the combination of MPC (Model Predictive Controller) and a nonlinear Observer, ABB is utilizing a control scheme that gives a predicted future of what will happen to the vessel. The control system knows where the vessel will be when the system is given a command. Lepistö explains further, “We do not need to wait for the vessel to react on the command and then measure where we are. Given this and add on the vessel control from 0 to full speed without any change of control system together with a fully touch based operator station, the ABB Marine Ability Pilot Control is paving the way forward for a new area of DP and maneuvering systems.”

Indeed, the new ABB new DP Control is intended for use across the entire maneuvering spectrum – 0 to 22 KT – whether at sea, maneuvering in port or berthing / unberthing. The approach, a nod to the coming autonomous class of vessels, can, insists ABB’s Lepistö, achieve immediate value on the oceans today. “It definitely provides value for current vessels but is a prerequisite for development of vessels that operate autonomously in the future,” he said. Hence, if autonomous shipping is just around the corner, ABB will likely be on board when that vessel leaves the berth. 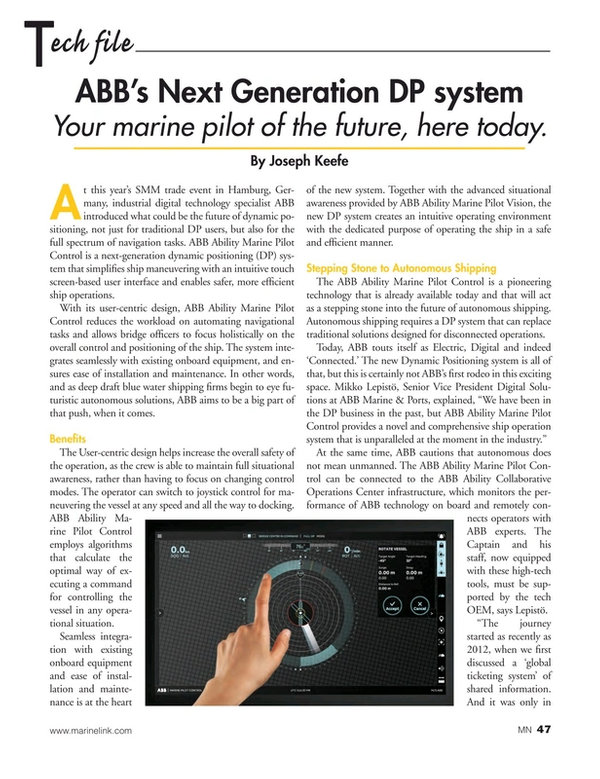