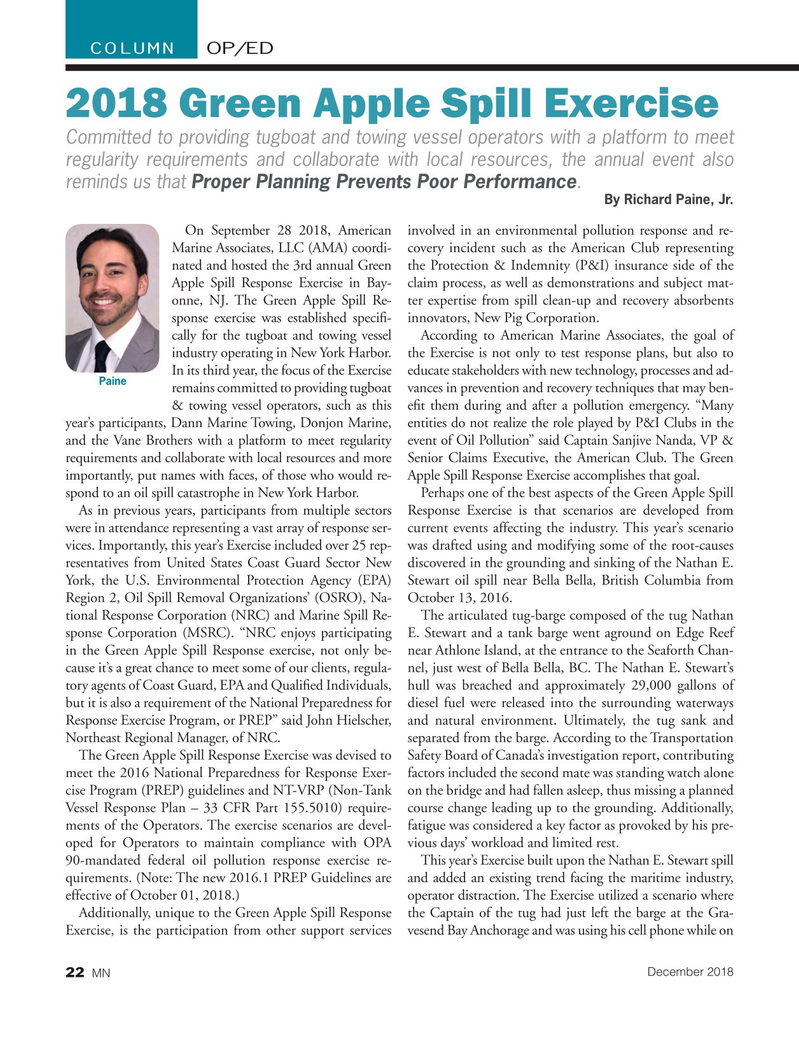 Committed to providing tugboat and towing vessel operators with a platform to meet regularity requirements and collaborate with local resources, the annual event also reminds us that Proper Planning Prevents Poor Performance.

On September 28 2018, American involved in an environmental pollution response and re-

Marine Associates, LLC (AMA) coordi- covery incident such as the American Club representing nated and hosted the 3rd annual Green the Protection & Indemnity (P&I) insurance side of the

cally for the tugboat and towing vessel According to American Marine Associates, the goal of industry operating in New York Harbor. the Exercise is not only to test response plans, but also to

In its third year, the focus of the Exercise educate stakeholders with new technology, processes and ad-

Paine remains committed to providing tugboat vances in prevention and recovery techniques that may ben- & towing vessel operators, such as this e? t them during and after a pollution emergency. “Many year’s participants, Dann Marine Towing, Donjon Marine, entities do not realize the role played by P&I Clubs in the and the Vane Brothers with a platform to meet regularity event of Oil Pollution” said Captain Sanjive Nanda, VP & requirements and collaborate with local resources and more Senior Claims Executive, the American Club. The Green importantly, put names with faces, of those who would re- Apple Spill Response Exercise accomplishes that goal.

spond to an oil spill catastrophe in New York Harbor. Perhaps one of the best aspects of the Green Apple Spill

As in previous years, participants from multiple sectors Response Exercise is that scenarios are developed from were in attendance representing a vast array of response ser- current events affecting the industry. This year’s scenario vices. Importantly, this year’s Exercise included over 25 rep- was drafted using and modifying some of the root-causes resentatives from United States Coast Guard Sector New discovered in the grounding and sinking of the Nathan E.

Region 2, Oil Spill Removal Organizations’ (OSRO), Na- October 13, 2016. tional Response Corporation (NRC) and Marine Spill Re- The articulated tug-barge composed of the tug Nathan sponse Corporation (MSRC). “NRC enjoys participating E. Stewart and a tank barge went aground on Edge Reef in the Green Apple Spill Response exercise, not only be- near Athlone Island, at the entrance to the Seaforth Chan- cause it’s a great chance to meet some of our clients, regula- nel, just west of Bella Bella, BC. The Nathan E. Stewart’s tory agents of Coast Guard, EPA and Quali? ed Individuals, hull was breached and approximately 29,000 gallons of but it is also a requirement of the National Preparedness for diesel fuel were released into the surrounding waterways

Northeast Regional Manager, of NRC. separated from the barge. According to the Transportation

The Green Apple Spill Response Exercise was devised to Safety Board of Canada’s investigation report, contributing meet the 2016 National Preparedness for Response Exer- factors included the second mate was standing watch alone cise Program (PREP) guidelines and NT-VRP (Non-Tank on the bridge and had fallen asleep, thus missing a planned

Vessel Response Plan – 33 CFR Part 155.5010) require- course change leading up to the grounding. Additionally, ments of the Operators. The exercise scenarios are devel- fatigue was considered a key factor as provoked by his pre- oped for Operators to maintain compliance with OPA vious days’ workload and limited rest.

Additionally, unique to the Green Apple Spill Response the Captain of the tug had just left the barge at the Gra-

Exercise, is the participation from other support services vesend Bay Anchorage and was using his cell phone while on