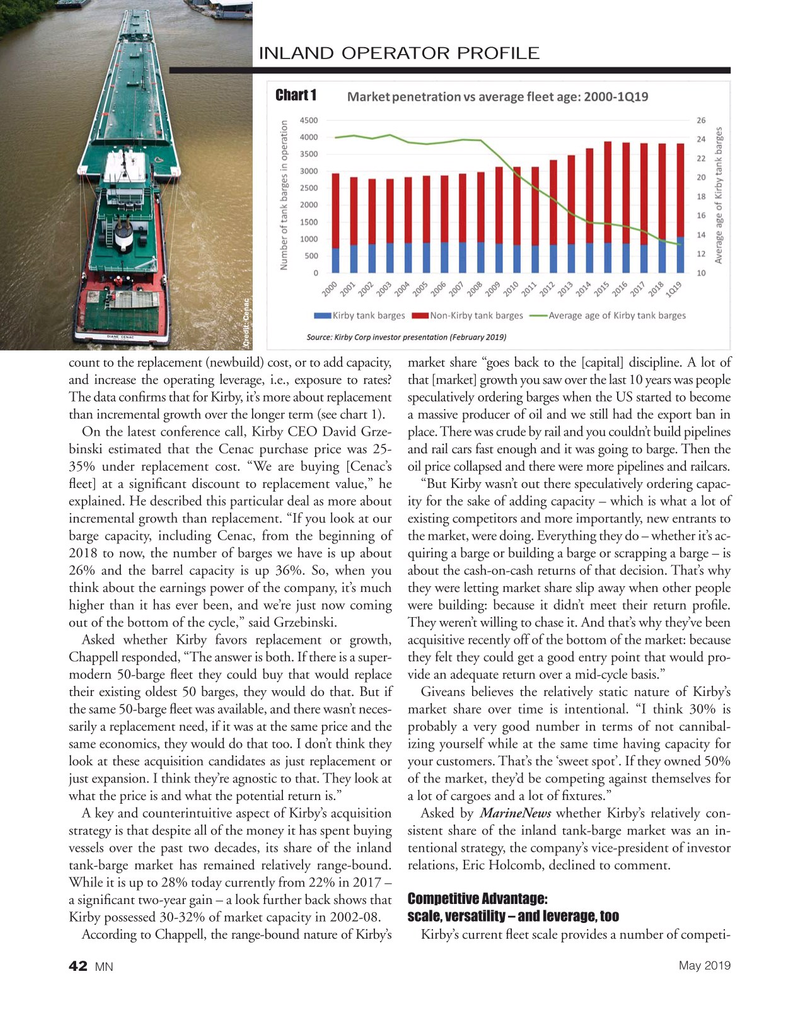 Credit: Cenac count to the replacement (newbuild) cost, or to add capacity, market share “goes back to the [capital] discipline. A lot of and increase the operating leverage, i.e., exposure to rates? that [market] growth you saw over the last 10 years was people

The data con? rms that for Kirby, it’s more about replacement speculatively ordering barges when the US started to become than incremental growth over the longer term (see chart 1). a massive producer of oil and we still had the export ban in

On the latest conference call, Kirby CEO David Grze- place. There was crude by rail and you couldn’t build pipelines binski estimated that the Cenac purchase price was 25- and rail cars fast enough and it was going to barge. Then the 35% under replacement cost. “We are buying [Cenac’s oil price collapsed and there were more pipelines and railcars. ? eet] at a signi? cant discount to replacement value,” he “But Kirby wasn’t out there speculatively ordering capac- explained. He described this particular deal as more about ity for the sake of adding capacity – which is what a lot of incremental growth than replacement. “If you look at our existing competitors and more importantly, new entrants to barge capacity, including Cenac, from the beginning of the market, were doing. Everything they do – whether it’s ac- 2018 to now, the number of barges we have is up about quiring a barge or building a barge or scrapping a barge – is 26% and the barrel capacity is up 36%. So, when you about the cash-on-cash returns of that decision. That’s why think about the earnings power of the company, it’s much they were letting market share slip away when other people higher than it has ever been, and we’re just now coming were building: because it didn’t meet their return pro? le. out of the bottom of the cycle,” said Grzebinski. They weren’t willing to chase it. And that’s why they’ve been

Asked whether Kirby favors replacement or growth, acquisitive recently off of the bottom of the market: because

Chappell responded, “The answer is both. If there is a super- they felt they could get a good entry point that would pro- modern 50-barge ? eet they could buy that would replace vide an adequate return over a mid-cycle basis.” their existing oldest 50 barges, they would do that. But if Giveans believes the relatively static nature of Kirby’s the same 50-barge ? eet was available, and there wasn’t neces- market share over time is intentional. “I think 30% is sarily a replacement need, if it was at the same price and the probably a very good number in terms of not cannibal- same economics, they would do that too. I don’t think they izing yourself while at the same time having capacity for look at these acquisition candidates as just replacement or your customers. That’s the ‘sweet spot’. If they owned 50% just expansion. I think they’re agnostic to that. They look at of the market, they’d be competing against themselves for what the price is and what the potential return is.” a lot of cargoes and a lot of ? xtures.”

A key and counterintuitive aspect of Kirby’s acquisition Asked by MarineNews whether Kirby’s relatively con- strategy is that despite all of the money it has spent buying sistent share of the inland tank-barge market was an in- vessels over the past two decades, its share of the inland tentional strategy, the company’s vice-president of investor tank-barge market has remained relatively range-bound. relations, Eric Holcomb, declined to comment.

While it is up to 28% today currently from 22% in 2017 – a signi? cant two-year gain – a look further back shows that Competitive Advantage:

According to Chappell, the range-bound nature of Kirby’s Kirby’s current ? eet scale provides a number of competi-