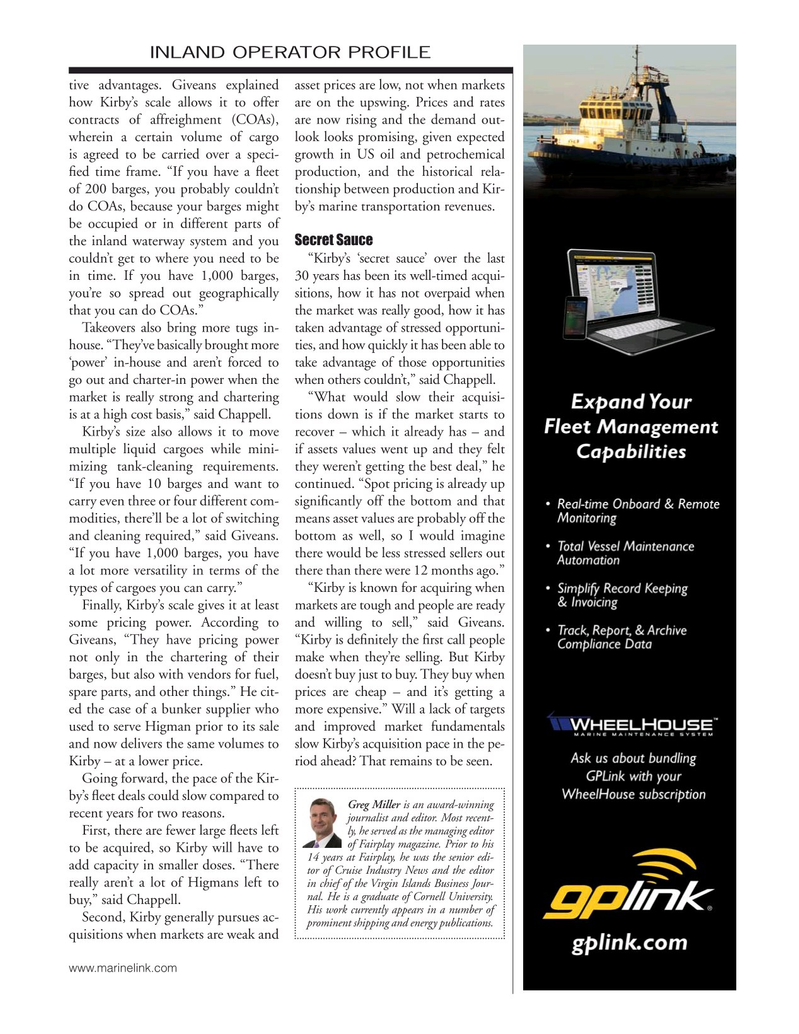 INLAND OPERATOR PROFILE tive advantages. Giveans explained asset prices are low, not when markets how Kirby’s scale allows it to offer are on the upswing. Prices and rates contracts of affreighment (COAs), are now rising and the demand out- wherein a certain volume of cargo look looks promising, given expected is agreed to be carried over a speci- growth in US oil and petrochemical ? ed time frame. “If you have a ? eet production, and the historical rela- of 200 barges, you probably couldn’t tionship between production and Kir- do COAs, because your barges might by’s marine transportation revenues.

be occupied or in different parts of the inland waterway system and you Secret Sauce couldn’t get to where you need to be “Kirby’s ‘secret sauce’ over the last in time. If you have 1,000 barges, 30 years has been its well-timed acqui- you’re so spread out geographically sitions, how it has not overpaid when that you can do COAs.” the market was really good, how it has

Takeovers also bring more tugs in- taken advantage of stressed opportuni- house. “They’ve basically brought more ties, and how quickly it has been able to ‘power’ in-house and aren’t forced to take advantage of those opportunities go out and charter-in power when the when others couldn’t,” said Chappell.

market is really strong and chartering “What would slow their acquisi- is at a high cost basis,” said Chappell. tions down is if the market starts to

Kirby’s size also allows it to move recover – which it already has – and multiple liquid cargoes while mini- if assets values went up and they felt mizing tank-cleaning requirements. they weren’t getting the best deal,” he “If you have 10 barges and want to continued. “Spot pricing is already up carry even three or four different com- signi? cantly off the bottom and that modities, there’ll be a lot of switching means asset values are probably off the and cleaning required,” said Giveans. bottom as well, so I would imagine “If you have 1,000 barges, you have there would be less stressed sellers out a lot more versatility in terms of the there than there were 12 months ago.” types of cargoes you can carry.” “Kirby is known for acquiring when

Finally, Kirby’s scale gives it at least markets are tough and people are ready some pricing power. According to and willing to sell,” said Giveans.

Giveans, “They have pricing power “Kirby is de? nitely the ? rst call people not only in the chartering of their make when they’re selling. But Kirby barges, but also with vendors for fuel, doesn’t buy just to buy. They buy when spare parts, and other things.” He cit- prices are cheap – and it’s getting a ed the case of a bunker supplier who more expensive.” Will a lack of targets used to serve Higman prior to its sale and improved market fundamentals and now delivers the same volumes to slow Kirby’s acquisition pace in the pe-

Kirby – at a lower price. riod ahead? That remains to be seen.

Going forward, the pace of the Kir- by’s ? eet deals could slow compared to

Greg Miller is an award-winning recent years for two reasons.

journalist and editor. Most recent- ly, he served as the managing editor

First, there are fewer large ? eets left of Fairplay magazine. Prior to his to be acquired, so Kirby will have to 14 years at Fairplay, he was the senior edi- add capacity in smaller doses. “There tor of Cruise Industry News and the editor really aren’t a lot of Higmans left to in chief of the Virgin Islands Business Jour- nal. He is a graduate of Cornell University. buy,” said Chappell.

His work currently appears in a number of