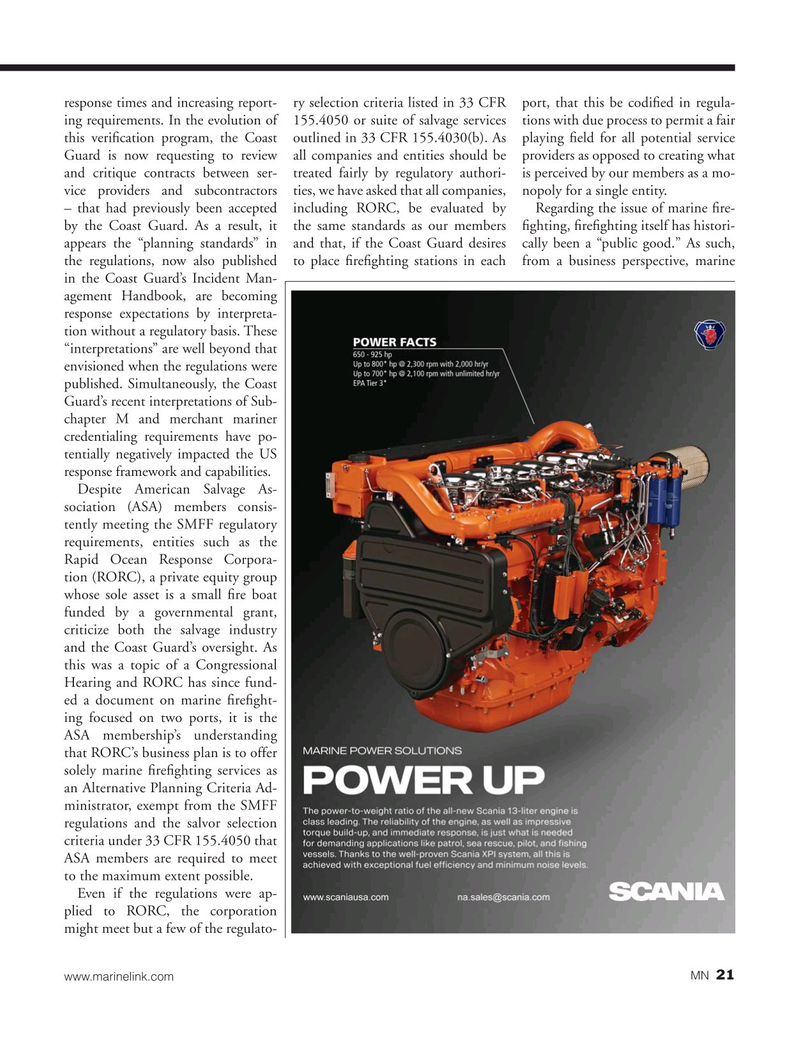 response times and increasing report- ry selection criteria listed in 33 CFR port, that this be codi? ed in regula- ing requirements. In the evolution of 155.4050 or suite of salvage services tions with due process to permit a fair this veri? cation program, the Coast outlined in 33 CFR 155.4030(b). As playing ? eld for all potential service

Guard is now requesting to review all companies and entities should be providers as opposed to creating what and critique contracts between ser- treated fairly by regulatory authori- is perceived by our members as a mo- vice providers and subcontractors ties, we have asked that all companies, nopoly for a single entity.

– that had previously been accepted including RORC, be evaluated by Regarding the issue of marine ? re- by the Coast Guard. As a result, it the same standards as our members ? ghting, ? re? ghting itself has histori- appears the “planning standards” in and that, if the Coast Guard desires cally been a “public good.” As such, the regulations, now also published to place ? re? ghting stations in each from a business perspective, marine in the Coast Guard’s Incident Man- agement Handbook, are becoming response expectations by interpreta- tion without a regulatory basis. These “interpretations” are well beyond that envisioned when the regulations were published. Simultaneously, the Coast

Despite American Salvage As- sociation (ASA) members consis- tently meeting the SMFF regulatory requirements, entities such as the

Rapid Ocean Response Corpora- tion (RORC), a private equity group whose sole asset is a small ? re boat funded by a governmental grant, criticize both the salvage industry and the Coast Guard’s oversight. As this was a topic of a Congressional

Hearing and RORC has since fund- ed a document on marine ? re? ght- ing focused on two ports, it is the

ASA membership’s understanding that RORC’s business plan is to offer solely marine ? re? ghting services as an Alternative Planning Criteria Ad- ministrator, exempt from the SMFF regulations and the salvor selection criteria under 33 CFR 155.4050 that

ASA members are required to meet to the maximum extent possible.

Even if the regulations were ap- plied to RORC, the corporation might meet but a few of the regulato- 21 www.marinelink.com MN