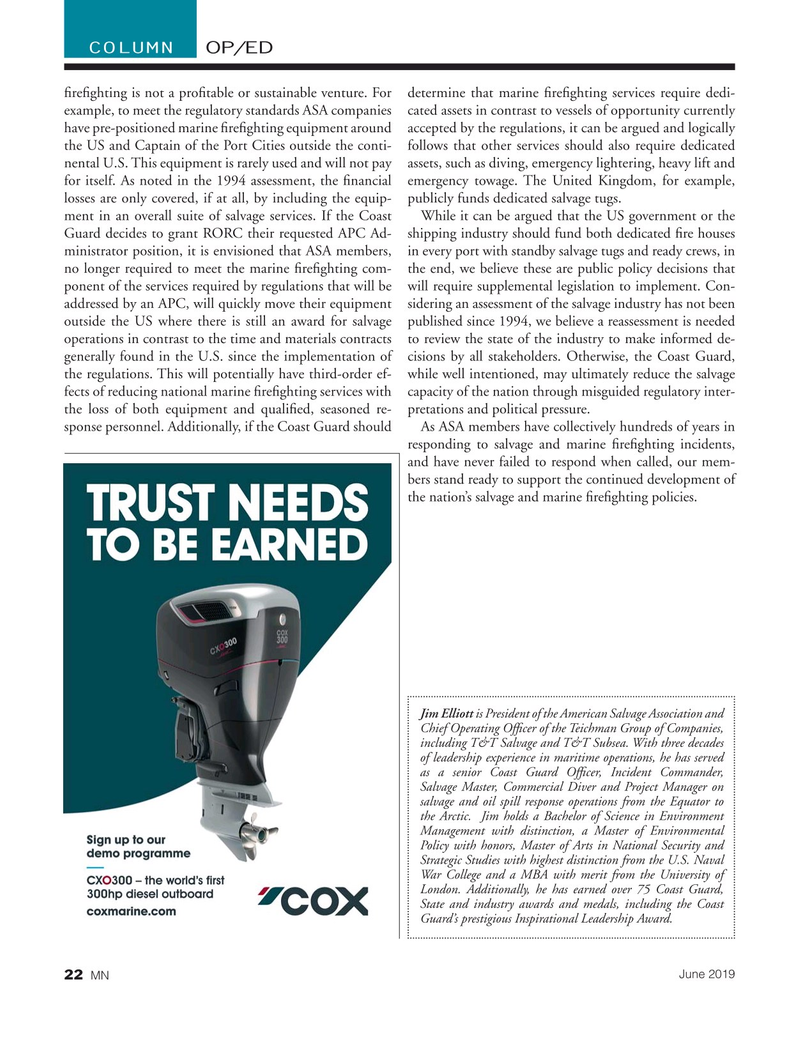 COLUMN OP/ED ? re? ghting is not a pro? table or sustainable venture. For determine that marine ? re? ghting services require dedi- example, to meet the regulatory standards ASA companies cated assets in contrast to vessels of opportunity currently have pre-positioned marine ? re? ghting equipment around accepted by the regulations, it can be argued and logically the US and Captain of the Port Cities outside the conti- follows that other services should also require dedicated nental U.S. This equipment is rarely used and will not pay assets, such as diving, emergency lightering, heavy lift and for itself. As noted in the 1994 assessment, the ? nancial emergency towage. The United Kingdom, for example, losses are only covered, if at all, by including the equip- publicly funds dedicated salvage tugs. ment in an overall suite of salvage services. If the Coast While it can be argued that the US government or the

Guard decides to grant RORC their requested APC Ad- shipping industry should fund both dedicated ? re houses ministrator position, it is envisioned that ASA members, in every port with standby salvage tugs and ready crews, in no longer required to meet the marine ? re? ghting com- the end, we believe these are public policy decisions that ponent of the services required by regulations that will be will require supplemental legislation to implement. Con- addressed by an APC, will quickly move their equipment sidering an assessment of the salvage industry has not been outside the US where there is still an award for salvage published since 1994, we believe a reassessment is needed operations in contrast to the time and materials contracts to review the state of the industry to make informed de- generally found in the U.S. since the implementation of cisions by all stakeholders. Otherwise, the Coast Guard, the regulations. This will potentially have third-order ef- while well intentioned, may ultimately reduce the salvage fects of reducing national marine ? re? ghting services with capacity of the nation through misguided regulatory inter- the loss of both equipment and quali? ed, seasoned re- pretations and political pressure.

Jim Elliott is President of the American Salvage Association and

Chief Operating Of? cer of the Teichman Group of Companies, including T&T Salvage and T&T Subsea. With three decades of leadership experience in maritime operations, he has served as a senior Coast Guard Of? cer, Incident Commander,

Salvage Master, Commercial Diver and Project Manager on salvage and oil spill response operations from the Equator to the Arctic. Jim holds a Bachelor of Science in Environment

Management with distinction, a Master of Environmental

Policy with honors, Master of Arts in National Security and

Strategic Studies with highest distinction from the U.S. Naval

War College and a MBA with merit from the University of

London. Additionally, he has earned over 75 Coast Guard,

State and industry awards and medals, including the Coast