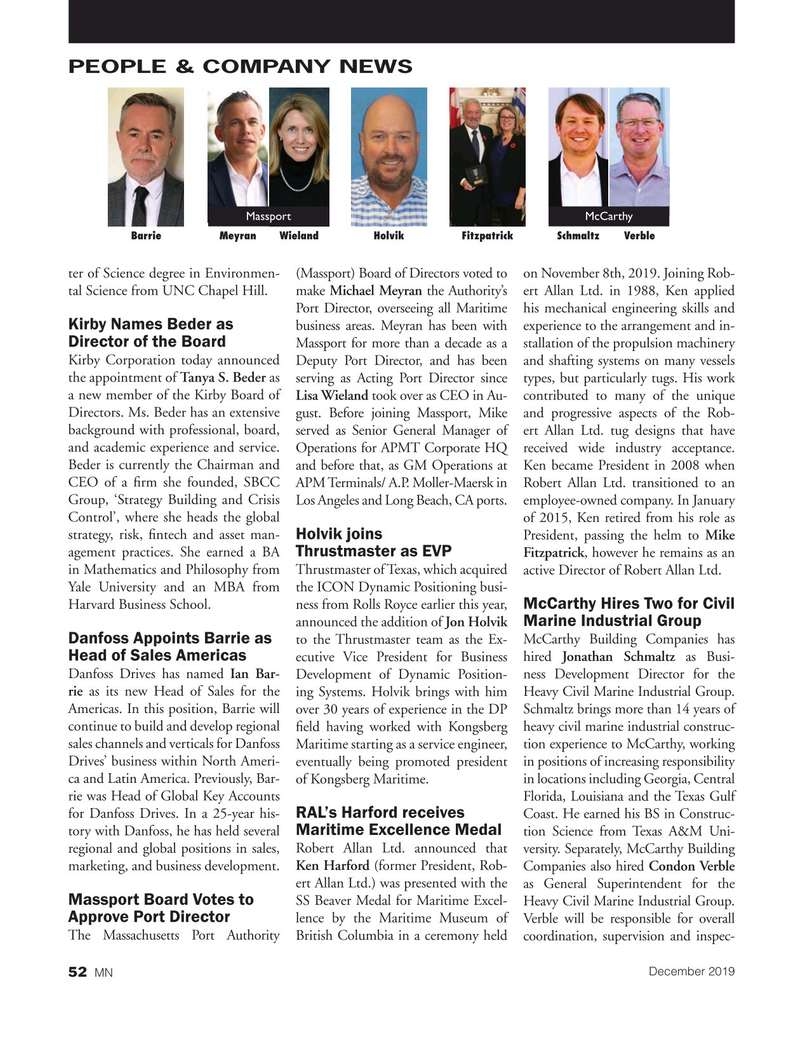 Port Director, overseeing all Maritime his mechanical engineering skills and

Kirby Names Beder as business areas. Meyran has been with experience to the arrangement and in-

Director of the Board

Kirby Corporation today announced Deputy Port Director, and has been and shafting systems on many vessels the appointment of Tanya S. Beder as serving as Acting Port Director since types, but particularly tugs. His work a new member of the Kirby Board of Lisa Wieland took over as CEO in Au- contributed to many of the unique

Directors. Ms. Beder has an extensive gust. Before joining Massport, Mike and progressive aspects of the Rob- background with professional, board, served as Senior General Manager of ert Allan Ltd. tug designs that have and academic experience and service. Operations for APMT Corporate HQ received wide industry acceptance.

Beder is currently the Chairman and and before that, as GM Operations at Ken became President in 2008 when

CEO of a ? rm she founded, SBCC APM Terminals/ A.P. Moller-Maersk in Robert Allan Ltd. transitioned to an

Control’, where she heads the global of 2015, Ken retired from his role as strategy, risk, ? ntech and asset man- President, passing the helm to Mike

Holvik joins agement practices. She earned a BA Fitzpatrick, however he remains as an

Thrustmaster as EVP in Mathematics and Philosophy from Thrustmaster of Texas, which acquired active Director of Robert Allan Ltd.

Yale University and an MBA from the ICON Dynamic Positioning busi-

Danfoss Drives has named Ian Bar- Development of Dynamic Position- ness Development Director for the rie as its new Head of Sales for the ing Systems. Holvik brings with him Heavy Civil Marine Industrial Group.

Americas. In this position, Barrie will over 30 years of experience in the DP Schmaltz brings more than 14 years of continue to build and develop regional ? eld having worked with Kongsberg heavy civil marine industrial construc- sales channels and verticals for Danfoss Maritime starting as a service engineer, tion experience to McCarthy, working

Drives’ business within North Ameri- eventually being promoted president in positions of increasing responsibility ca and Latin America. Previously, Bar- of Kongsberg Maritime. in locations including Georgia, Central rie was Head of Global Key Accounts Florida, Louisiana and the Texas Gulf for Danfoss Drives. In a 25-year his- Coast. He earned his BS in Construc-

Massport Board Votes to