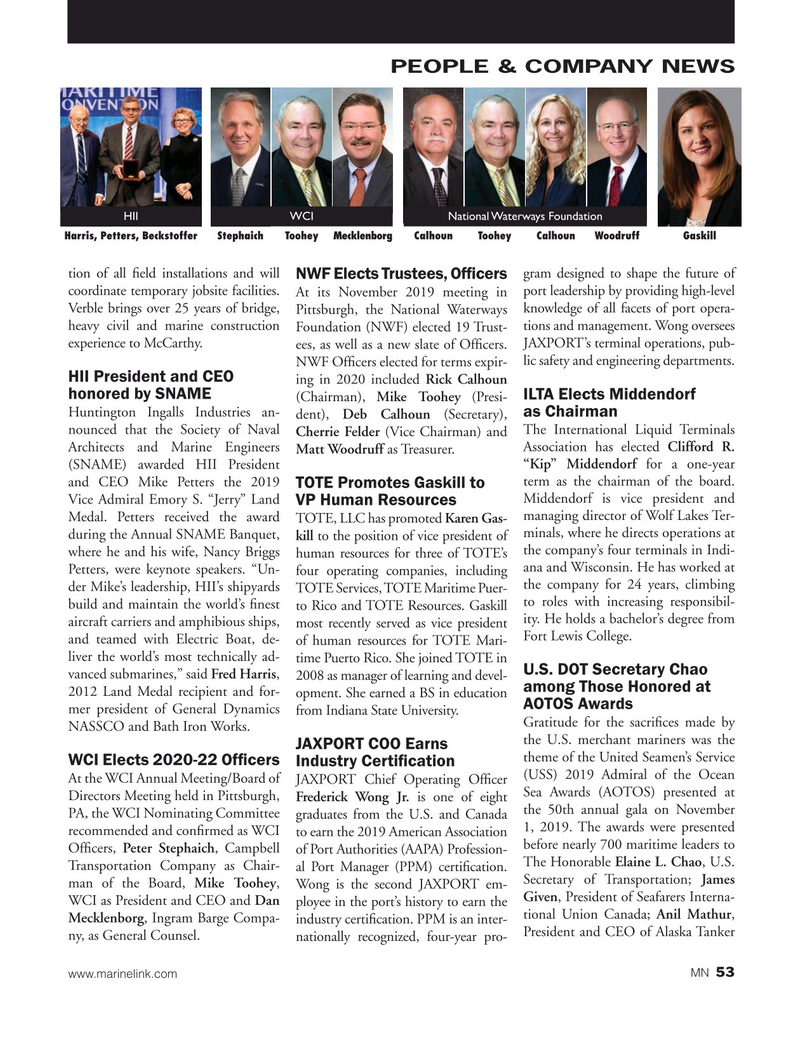 Architects and Marine Engineers Matt Woodruff as Treasurer. (SNAME) awarded HII President “Kip” Middendorf for a one-year and CEO Mike Petters the 2019 term as the chairman of the board.

Medal. Petters received the award TOTE, LLC has promoted Karen Gas- during the Annual SNAME Banquet, kill to the position of vice president of minals, where he directs operations at where he and his wife, Nancy Briggs human resources for three of TOTE’s the company’s four terminals in Indi-

Petters, were keynote speakers. “Un- four operating companies, including ana and Wisconsin. He has worked at the company for 24 years, climbing der Mike’s leadership, HII’s shipyards TOTE Services, TOTE Maritime Puer- build and maintain the world’s ? nest to Rico and TOTE Resources. Gaskill to roles with increasing responsibil- aircraft carriers and amphibious ships, most recently served as vice president ity. He holds a bachelor’s degree from

and teamed with Electric Boat, de- of human resources for TOTE Mari- liver the world’s most technically ad- time Puerto Rico. She joined TOTE in

U.S. DOT Secretary Chao vanced submarines,” said Fred Harris, 2008 as manager of learning and devel- among Those Honored at 2012 Land Medal recipient and for- opment. She earned a BS in education

Gratitude for the sacri? ces made by

NASSCO and Bath Iron Works. the U.S. merchant mariners was the

At the WCI Annual Meeting/Board of JAXPORT Chief Operating Of? cer (USS) 2019 Admiral of the Ocean

PA, the WCI Nominating Committee graduates from the U.S. and Canada the 50th annual gala on November recommended and con? rmed as WCI to earn the 2019 American Association 1, 2019. The awards were presented before nearly 700 maritime leaders to

Secretary of Transportation; James man of the Board, Mike Toohey, Wong is the second JAXPORT em-

WCI as President and CEO and Dan ployee in the port’s history to earn the Given, President of Seafarers Interna- tional Union Canada; Anil Mathur,