Read this page in Pdf, Flash or Html5 edition of May 2020 Marine News Magazine 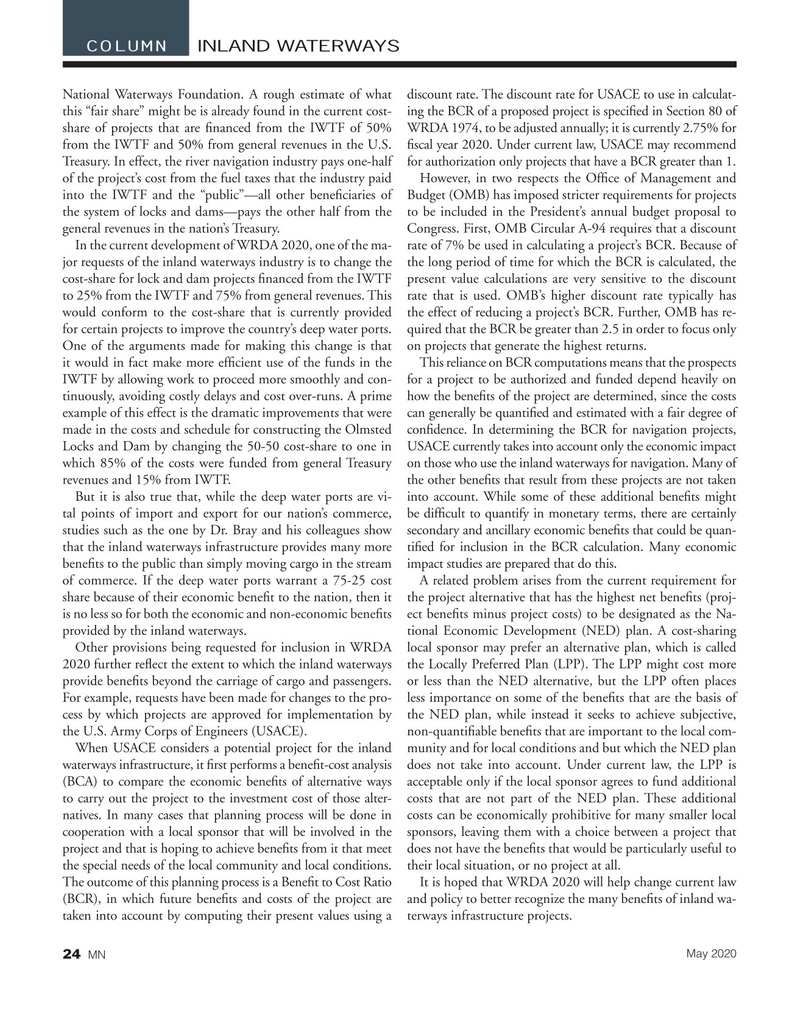 National Waterways Foundation. A rough estimate of what discount rate. The discount rate for USACE to use in calculat- this “fair share” might be is already found in the current cost- ing the BCR of a proposed project is speci?ed in Section 80 of share of projects that are ?nanced from the IWTF of 50% WRDA 1974, to be adjusted annually; it is currently 2.75% for from the IWTF and 50% from general revenues in the U.S. ?scal year 2020. Under current law, USACE may recommend

Treasury. In effect, the river navigation industry pays one-half for authorization only projects that have a BCR greater than 1.

of the project’s cost from the fuel taxes that the industry paid However, in two respects the Of?ce of Management and into the IWTF and the “public”—all other bene?ciaries of Budget (OMB) has imposed stricter requirements for projects the system of locks and dams—pays the other half from the to be included in the President’s annual budget proposal to general revenues in the nation’s Treasury. Congress. First, OMB Circular A-94 requires that a discount

In the current development of WRDA 2020, one of the ma- rate of 7% be used in calculating a project’s BCR. Because of jor requests of the inland waterways industry is to change the the long period of time for which the BCR is calculated, the cost-share for lock and dam projects ?nanced from the IWTF present value calculations are very sensitive to the discount to 25% from the IWTF and 75% from general revenues. This rate that is used. OMB’s higher discount rate typically has would conform to the cost-share that is currently provided the effect of reducing a project’s BCR. Further, OMB has re- for certain projects to improve the country’s deep water ports. quired that the BCR be greater than 2.5 in order to focus only

One of the arguments made for making this change is that on projects that generate the highest returns.

it would in fact make more ef?cient use of the funds in the This reliance on BCR computations means that the prospects

IWTF by allowing work to proceed more smoothly and con- for a project to be authorized and funded depend heavily on tinuously, avoiding costly delays and cost over-runs. A prime how the bene?ts of the project are determined, since the costs example of this effect is the dramatic improvements that were can generally be quanti?ed and estimated with a fair degree of made in the costs and schedule for constructing the Olmsted con?dence. In determining the BCR for navigation projects,

Locks and Dam by changing the 50-50 cost-share to one in USACE currently takes into account only the economic impact which 85% of the costs were funded from general Treasury on those who use the inland waterways for navigation. Many of revenues and 15% from IWTF. the other bene?ts that result from these projects are not taken

But it is also true that, while the deep water ports are vi- into account. While some of these additional bene?ts might tal points of import and export for our nation’s commerce, be dif?cult to quantify in monetary terms, there are certainly studies such as the one by Dr. Bray and his colleagues show secondary and ancillary economic bene?ts that could be quan- that the inland waterways infrastructure provides many more ti?ed for inclusion in the BCR calculation. Many economic bene?ts to the public than simply moving cargo in the stream impact studies are prepared that do this.

of commerce. If the deep water ports warrant a 75-25 cost A related problem arises from the current requirement for share because of their economic bene?t to the nation, then it the project alternative that has the highest net bene?ts (proj- is no less so for both the economic and non-economic bene?ts ect bene?ts minus project costs) to be designated as the Na- provided by the inland waterways. tional Economic Development (NED) plan. A cost-sharing

Other provisions being requested for inclusion in WRDA local sponsor may prefer an alternative plan, which is called 2020 further re?ect the extent to which the inland waterways the Locally Preferred Plan (LPP). The LPP might cost more provide bene?ts beyond the carriage of cargo and passengers. or less than the NED alternative, but the LPP often places

For example, requests have been made for changes to the pro- less importance on some of the bene?ts that are the basis of cess by which projects are approved for implementation by the NED plan, while instead it seeks to achieve subjective, the U.S. Army Corps of Engineers (USACE). non-quanti?able bene?ts that are important to the local com-

When USACE considers a potential project for the inland munity and for local conditions and but which the NED plan waterways infrastructure, it ?rst performs a bene?t-cost analysis does not take into account. Under current law, the LPP is (BCA) to compare the economic bene?ts of alternative ways acceptable only if the local sponsor agrees to fund additional to carry out the project to the investment cost of those alter- costs that are not part of the NED plan. These additional natives. In many cases that planning process will be done in costs can be economically prohibitive for many smaller local cooperation with a local sponsor that will be involved in the sponsors, leaving them with a choice between a project that project and that is hoping to achieve bene?ts from it that meet does not have the bene?ts that would be particularly useful to the special needs of the local community and local conditions. their local situation, or no project at all.

The outcome of this planning process is a Bene?t to Cost Ratio It is hoped that WRDA 2020 will help change current law (BCR), in which future bene?ts and costs of the project are and policy to better recognize the many bene?ts of inland wa- taken into account by computing their present values using a terways infrastructure projects.