It was a beautiful mid-summer afternoon in the nation’s heartland. The skies were clear, the sun was shining and the variable southwest breeze barely caused a ripple on the muddy water of the winding river. Optimistic fishermen lined the riverbanks and a few recreational boaters were cruising close to the floating docks lining both shores.

This tranquil scene on this busy waterway was about to change…and quickly.

A parting of the ways
About a half mile upriver, a 95-foot tug was proceeding southbound on a slow bell with two barges made up end-to-end along her starboard side. The tow was proceeding at a speed of 3-4 knots with the tide beginning to flood and a light southwesterly wind. Suddenly, the wind unexpectedly turned gusty and, combined with the flooding tide, pushed the tow to port and out of the navigable channel where the tug grounded in the soft, muddy river bottom.

That’s when all hell…and the two barges…broke loose.

Carried by their forward momentum, the two light sand skows being hip-towed end-to-end made up with soft lines with rakes facing out started their demolition derby-like rampage down river. First victims of the lead barge were a cabin cruiser and small sailboat tied up to a floating dock on the river’s western bank. The barge sideswiped both boats, squeezing them with a crunching sound against the floating dock. The impact slowed the barge tandem, causing the trailing barge to pivot, swing out past the lead barge and break away from its tow mate. Being pushed by the downriver current, the barge, which was now perpendicular to the riverbank, drifted to the other side of the channel and continued its trek downriver. The former lead barge, slowed by its allision with the docked boats, traveled another 50 yards before grounding itself in the shallow water on the river’s western bank.

Span strike
Meanwhile, the bucolic scene of only minutes before downriver changed very rapidly as fishermen on both river banks watched in disbelief as the still free-floating second barge took dead aim for a railroad bridge spanning the river. Less than a minute later, the barge struck the eastern support columns of the span where it became pinned underneath the structure and held there by the current. Not sure what, if any, damage the barge/bridge allision had caused, railroad authorities immediately closed the bridge to rail traffic.

While this chaotic scene was playing out less than a mile downriver, upriver the tugboat’s master was working to free his vessel from the mud while instructing a deckhand to contact the Coast Guard on his cell phone to alert it of his situation.

Soon after the captain freed his vessel from the bottom’s grip, USCG investigators arrived on the scene having already been notified by witnesses along both sides of the river. Eventually, under Coast Guard supervision, the barge wedged under the bridge downriver was freed on the next ebb tide and eventually reunited with its prodigal sister barge which by then had been pulled out of the mud. Both were then moved to their originally intended destination a couple of miles downriver.

Back on the tug, the captain contacted his company to report the incident and then promptly reported the claim to his longtime license insurance company. Within minutes, a local maritime attorney had been assigned by his insurer and was speaking to the visibly shaken tug master on his cell phone preparing him for his initial interview with USCG investigators. All involved mariners involved in the incident were sent for drug and alcohol testing and, after a brief ‘informal’ interview while still onboard the tug, the master was instructed to complete and submit a 2692 Marine Casualty Report and be prepared to report for a formal interview regarding the incident. All of this communication was shared with his attorney who instructed his client to contact him as soon as he was given an interview date and time so he could accompany him to the critical Coast Guard meeting.

While, the railroad bridge was promptly inspected and determined to be structurally sound and reopened to rail traffic about six hours after the incident, the cabin cruiser, sailboat and floating dock did not fare as well, introducing the strong likelihood of civil suits being filed against the tug captain. That likelihood became a reality less than two weeks later.

A dual threat
Slapped with negligence charges from the Coast Guard shortly after his formal interview and then civil suits shortly thereafter from the boat and dock owners, after weighing his options with his attorney, the captain decided to reach a settlement agreement with the Coast Guard to avoid Administrative Court proceedings. The agreement mutually agreed to called for a 90-day license suspension of which 30 days had to be served immediately, followed by a 60-day probationary period. Importantly, the master could continue to work on his license after completing his 30-day suspension, but would have to serve the balance of his 90-day suspension if he had another USCG chargeable incident while still on probation.

The civil suits were also handled, and eventually settled, by the same insurer-assigned maritime attorney who negotiated the reduced sanction with the Coast Guard. And, because the master had chosen to insure his monthly income as part of his license insurance package, his family was protected from a financial crisis while he was serving his unpaid suspension.

So, what began as a lazy sun-drenched day on the river quickly deteriorated into a harrowing, dangerous and potentially career-threatening afternoon for the veteran tug captain. Thankfully, the license, income protection and civil defense package that the master had purchased years earlier and renewed annually but never had to use, enabled him to continue his professional career. Three months later, he successfully met the terms of his probation settlement agreement.

It was certainly a gut-wrenching experience, but one with an outcome which allowed the licensed mariner to continue his career. 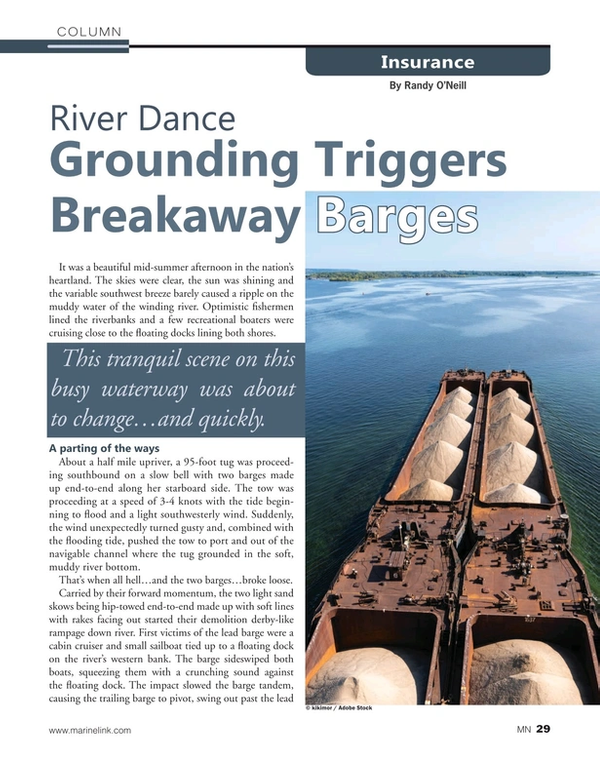