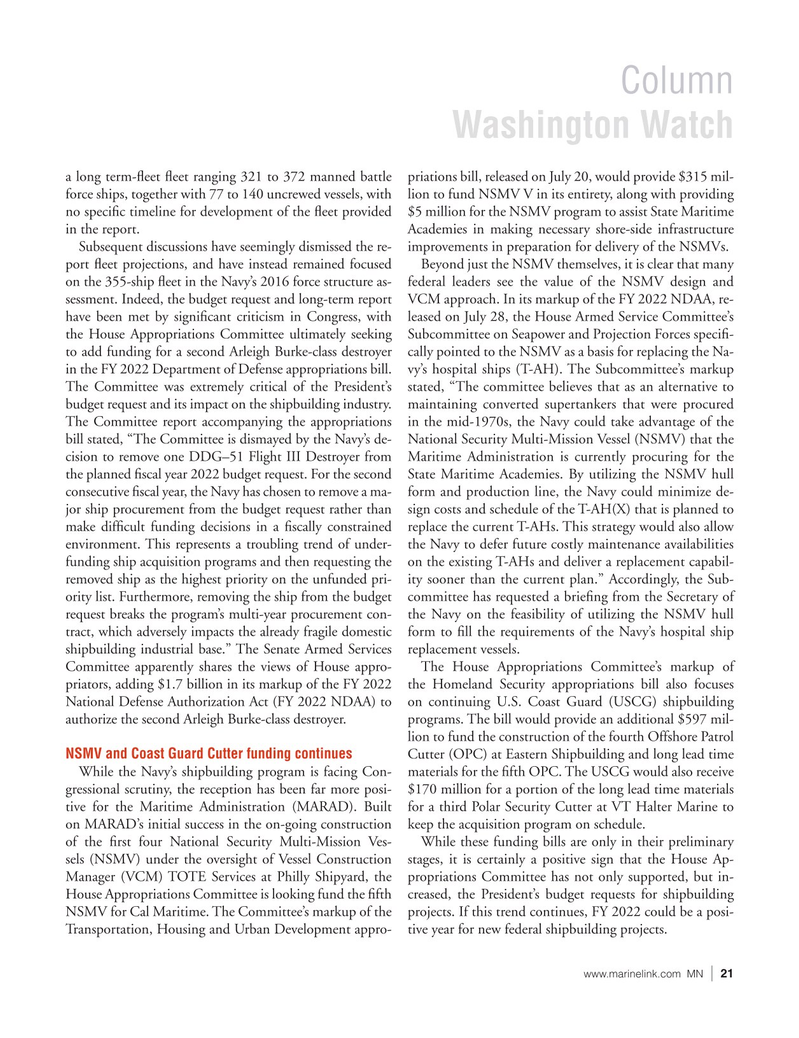 Washington Watch a long term-? eet ? eet ranging 321 to 372 manned battle priations bill, released on July 20, would provide $315 mil- force ships, together with 77 to 140 uncrewed vessels, with lion to fund NSMV V in its entirety, along with providing no speci? c timeline for development of the ? eet provided $5 million for the NSMV program to assist State Maritime in the report. Academies in making necessary shore-side infrastructure

Subsequent discussions have seemingly dismissed the re- improvements in preparation for delivery of the NSMVs.

port ? eet projections, and have instead remained focused Beyond just the NSMV themselves, it is clear that many on the 355-ship ? eet in the Navy’s 2016 force structure as- federal leaders see the value of the NSMV design and sessment. Indeed, the budget request and long-term report VCM approach. In its markup of the FY 2022 NDAA, re- have been met by signi? cant criticism in Congress, with leased on July 28, the House Armed Service Committee’s the House Appropriations Committee ultimately seeking Subcommittee on Seapower and Projection Forces speci? - to add funding for a second Arleigh Burke-class destroyer cally pointed to the NSMV as a basis for replacing the Na- in the FY 2022 Department of Defense appropriations bill. vy’s hospital ships (T-AH). The Subcommittee’s markup

The Committee was extremely critical of the President’s stated, “The committee believes that as an alternative to budget request and its impact on the shipbuilding industry. maintaining converted supertankers that were procured

The Committee report accompanying the appropriations in the mid-1970s, the Navy could take advantage of the bill stated, “The Committee is dismayed by the Navy’s de- National Security Multi-Mission Vessel (NSMV) that the cision to remove one DDG–51 Flight III Destroyer from Maritime Administration is currently procuring for the the planned ? scal year 2022 budget request. For the second State Maritime Academies. By utilizing the NSMV hull consecutive ? scal year, the Navy has chosen to remove a ma- form and production line, the Navy could minimize de- jor ship procurement from the budget request rather than sign costs and schedule of the T-AH(X) that is planned to make dif? cult funding decisions in a ? scally constrained replace the current T-AHs. This strategy would also allow environment. This represents a troubling trend of under- the Navy to defer future costly maintenance availabilities funding ship acquisition programs and then requesting the on the existing T-AHs and deliver a replacement capabil- removed ship as the highest priority on the unfunded pri- ity sooner than the current plan.” Accordingly, the Sub- ority list. Furthermore, removing the ship from the budget committee has requested a brie? ng from the Secretary of request breaks the program’s multi-year procurement con- the Navy on the feasibility of utilizing the NSMV hull tract, which adversely impacts the already fragile domestic form to ? ll the requirements of the Navy’s hospital ship shipbuilding industrial base.” The Senate Armed Services replacement vessels.

Committee apparently shares the views of House appro- The House Appropriations Committee’s markup of priators, adding $1.7 billion in its markup of the FY 2022 the Homeland Security appropriations bill also focuses

While the Navy’s shipbuilding program is facing Con- materials for the ? fth OPC. The USCG would also receive gressional scrutiny, the reception has been far more posi- $170 million for a portion of the long lead time materials tive for the Maritime Administration (MARAD). Built for a third Polar Security Cutter at VT Halter Marine to on MARAD’s initial success in the on-going construction keep the acquisition program on schedule.

of the ? rst four National Security Multi-Mission Ves- While these funding bills are only in their preliminary sels (NSMV) under the oversight of Vessel Construction stages, it is certainly a positive sign that the House Ap-

Manager (VCM) TOTE Services at Philly Shipyard, the propriations Committee has not only supported, but in-

NSMV for Cal Maritime. The Committee’s markup of the projects. If this trend continues, FY 2022 could be a posi-