In the William M. (Mac) Thornberry National Defense Authorization Act for Fiscal Year 2021 (NDAA), Congress amended the Port Infrastructure Development Program (PIDP) administered by the U.S. Maritime Administration (MARAD) to reserve to smaller ports 18% of the amounts appropriated for grants under the PIDP. This replaced the minimum dollar threshold for PIDP grants of the lesser of $10 million or 10% of the total amount appropriated for the PIDP for a fiscal year. Congress has recently been appropriating substantially more than $100 million for the PIDP each year. This has undoubtedly been a positive development for the nation’s ports generally, but it effectively meant that a grant requested from the PIDP set-aside would need to be at least $10 million. The infrastructure projects of many inland and smaller coastal ports frequently do not meet this threshold. Although Congress has also been reducing the minimum grant size to $1 million in its annual appropriations acts, the underlying statute for the PIDP has remained unchanged, leaving smaller ports uncertain as to what the minimum grant amount would be from year to year.

With the change made by the NDAA, for a project to be eligible for a grant from the PIDP set-aside, it need only be carried out by a port that has had an average of less than eight millions tons of cargo for the immediately three calendar years from the time the application is submitted. The tonnage is to be determined using data of the U.S. Army Corps of Engineers, or from data provided by an independent audit which is acceptable to MARAD.

The benefits of this change to the PIDP’s set-aside became apparent in the first fiscal year of its implementation. On December 23, 2021 U.S. Secretary of Transportation Pete Buttigieg announced the award for FY 2021 of more the $241 million in funding under the PIDP for 25 projects. Of these 25 grants, 15 were made to small ports under the set-aside in a total amount of approximately $42.5 million. These grants ranged in amount from less than $1.2 million to $4.1 million. With only one exception, each of these awards was for 100% of the amount requested by the applicant. Prior to the change in the PIDP set-aside approach, none of these applications would have been eligible for an award under the PIDP without the reduction in the required minimum grant amount made by the appropriations act for FY 2021.

The revised PIDP set-aside protects the grant requests of smaller ports in another way as well. No fewer than 232 applications were submitted to the PIDP for FY 2021, requesting grants totaling more than $3.6 billion for projects of more than $9 billion. Under the pressure of such a strong need for funding of port infrastructure projects, the relatively modest requests of smaller ports might easily have been passed over for much larger projects without the protection of the PIDP set-aside.

The IIJA provides $5.25 billion for the PIDP, but this total amount is spread over five years, FY 2022 through FY 2026, at $450 million per year. The amount available each year, therefore, is not quite twice the total amount of grants made by the PIDP in FY 2021 and about one-eighth of the total amount of grant requests submitted to the PIDP in FY 2021 alone. Under the 18% set-aside, this works out to $81 million per year reserved for grants to small ports. Certainly, this is a major improvement in the commitment of federal funding for port infrastructure projects, but it is still likely to leave the needs of many ports unmet.

Therefore, ports should be aware of other programs included in the IIJA that either provide funding exclusively for ports or for which ports would be eligible to apply. For example, IIJA provides $25 million for the MARAD Marine Highways Program. Not a large sum in comparison to the funding available under the PIDP, but for a small port with relatively modest needs, it could be a useful resource if its project meets the conditions of the Marine Highways Program.

Among the programs for which ports are eligible, although not exclusively, for federal funding under IIJA is the existing Rebuilding American Infrastructure with Sustainability and Equity (RAISE, formerly BUILD) Program of the U.S. Department of Transportation, referred to in IIJA as the “Local and Regional Project Assistance Program.” The stated purpose of this program is to fund eligible projects that will have a significant local or regional impact and improve transportation infrastructure. Eligible projects include port infrastructure investments, including inland port infrastructure. The Department of Transportation has recently issued a Notice of Funding Opportunity (NOFO) for $1.5 billion in grant funding under the RAISE Program. This is the first discretionary funding program to accept applications under the IIJA. The NOFO can be found at https://www.transportation.gov/sites/dot.gov/files/2022-02/FINAL-2022-RAISE-NOFO.pdf. Applications must be submitted by 5 p.m. Eastern time on April 14, 2022.

Because many inland river ports are intermodal facilities that include the carriage of cargo by rail, another existing program from which small ports might receive funding is the Consolidated Rail Infrastructure and Safety Improvements (CRISI) Program administered by the Federal Railroad Administration. IIJA provides $5 billion in funding for this program over five fiscal years. Among the stated purposes of this program is the enhancement of multi-modal connections, including projects that improve rail access to ports. There are no predetermined minimum or maximum dollar thresholds for CRISI awards.

The IIJA directs the Secretary of Transportation, in consultation with the Secretary of Energy and the Environmental Protection Agency, to establish and carry out a program to reduce truck idling at port facilities, including grants to fund projects that reduce truck emissions at ports, and provides $50 million for each of FY 2022 through FY 2026. The implementation of this new program will require time for the preparation and issuance of regulations and program details. This program will likely be among those coordinated by the Infrastructure Implementation Task Force established by President Biden’s Executive Order No. 14052, co-chaired by Mitch Landrieu, former mayor of New Orleans and former lieutenant governor of New Orleans, and Brian Deese, Director of the National Economic Council.

Another new program that IIJA directs the Secretary of Transportation to establish is the Promoting Resilient Operations for Transformative, Efficient, and Cost-Saving Transportation (PROTECT) Program. Eligible entities include public port authorities. IIJA provides funding for this program of $250 million for each of FY 2022 and FY 2023, and $300 million for each of FY 2024, FY 2025, and FY 2026. The implementation of this program, too, will require time for the process of issuing and finalizing regulations and program details.

Becoming familiar with the various funding sources and their requirements for grant applications requires time and study. The websites of each of the programs and their and Notices of Funding Opportunity provide useful guidance on how to navigate the process. Resources are also available online and from trade associations for ports on the inland waterways. Consultants with experience and expertise in preparing grant applications can be engaged for a fee, if the size of the grant being requested justifies that cost. The chances of success might seem daunting in view of how much the need for port infrastructure exceeds the available funding, but one thing is certain: no one has received a grant who did not apply. 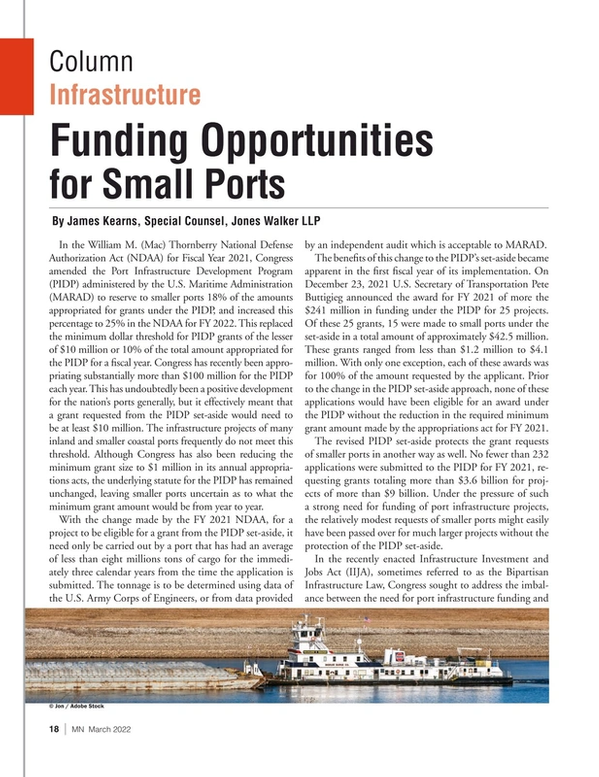 Other stories from March 2022 issue