The possibility now exists for ships to navigate the globe with no one at the helm. This capability has been demonstrated in the United States, Europe and Japan by autonomous workboats, survey vessels, and coastwise voyages by autonomous cargo vessels and ferries with the development of larger vessels capable of making trans-oceanic voyages coming soon. Despite this new reality, aside from a patchwork of voluntary best practices, there are no international standards for the safe design, operation or maintenance of autonomous vessels.

Recognizing this gap, the International Maritime Organization (IMO) has recently completed a so-called Regulatory Scoping Exercise (RSE) to begin the process of creating a framework for Maritime Autonomous Surface Ships (known as MASS) to enable their safe operation within existing IMO instruments, the most significant being the Regulations for Preventing Collisions at Sea (COLREGS).

What is a MASS and are they regulated by the COLREGS?
The IMO defines a MASS as a vessel which, to a varying degree, can operate independent of human interaction, up to an including a fully autonomous vessel with an operating system that makes decisions and determines actions by itself with no seafarers on board. COLREGS Rule 3(a), on the other hand, defines a vessel to include “every description of watercraft . . . used or capable of being used as a means of transportation on water.” Further, the COLREGS applies to “all vessels upon the high seas” and “in waters navigable by seagoing vessels.” Despite some commentators’ arguments to the contrary, it appears from its plain language that the COLREGS definition of a vessel is broad enough to include MASS.

Why focus on the COLREGS?
Despite the rapid development of autonomous vessel technology, for a long time, the large majority of world’s fleet will still be manned. But, with autonomous vessels already plying the world’s navigable waters, it is evitable that manned and unmanned vessels will interact regularly. The IMO has recognized this new reality. The scoping exercise identified the need to amend the regulatory framework of the COLREGS to govern MASS’s “interaction and co-existence with manned ships.”

The question for the marine industry and autonomous vessel developers then is: whether collision avoidance can be automated? Can the industry reconcile the existing collision avoidance rules with what has been called a “paradigm shift” to vessels navigated with little or no human involvement? The current rules rely on human senses and decision-making faculties. But autonomy relies on technology for information acquisition and decision making. The challenge with be replicating the human capabilities with artificial equivalents in a way that is understandable and predicable by the operators of manned vessels.

MASS COLREGS challenges
One challenge to reconciling MASS COLREGS compliance is how autonomous vessels will observe other vessels. The COLREGS use lights and sounds to signal the presence, aspect, and status of own ship and others. Bridge watch standers complying with the COLREGS detect light and sound signals from other vessels by maintaining “a proper look-out by sight and hearing.” These other vessels are deemed to be in sight of one another only when “one can be observed visually from the other.”

MASS, however, are fitted with electronic equipment such infrared cameras for the detection of other vessels. Is the detection of another vessel by such a device a “visual” observation under the rules? And how much of the other vessel must be observable by such a device before the vessel is deemed to be “in sight”? Under the present rules, a single light might be enough, but will it be enough for the artificial intelligence running an autonomous system?

In addition to presence and status, the COLREGS use sounds to signal maneuvers or intentions of own ship and others. For example, under the COLREGS, one short whistle blast means “I am altering my course to starboard.” In addition, in U.S. waters, a radiotelephone is required on power-driven vessels of 20 meters or over in length, and when necessary, the bridge watchstander is required to transmit the intentions of his vessel and other information necessary for safe navigation. U.S. courts have consistently held that the failure to use sound signals properly or monitor the radio and respond to calls is a basis for liability for any resulting collision. It remains to be seen if speech and/or sound recognition technology implemented in an autonomous vessel will suffice to comply with the rules.

The final challenge to autonomous COLREGS compliance is how to quantify the “ordinary practice of seamen.” Key terms in the COLREGS are undefined and often depend on the specific approach situation. For example, there is no COLREGS definition for what constitutes “risk of collision,” “close-quarters,” or passing at a “safe distance.” But autonomy requires quantifiable definitions that can be programmed into a computer algorithm. How an autonomous vessel will be programmed to apply such definitions and exercise seaman’s “judgment” is not established.

The RSE COLREGS conclusions
The IMO concluded that MASS represents a big “shift” and the “most future concept” in shipping and their operations will result in a “distortion or a lack of clarity within COLREGS.” They concluded that for automated operations with seafarers onboard, they should develop “equivalences” or “interpretations” of the current rules but amend the COLREGS for autonomous shipping without seafarers on board. This approach, however, is not without problems. Left unanswered is what terminology needs to be addressed, what performance standards are needed, and what lights, shapes, or sound signals should change. Further, it is not clear that equivalencies are authorized by the COLREGS, which only provides strictly limited “exemptions” for vessels of “special construction or purpose” that are unable to comply with the rules for lights, day shapes, and sound signaling appliances. Rather changes to the COLREGS must be by amendment, leaving it uncertain if the approach proposed by the IMO is on a sound regulatory basis.

COLREGS and MASS: A possible way forward
The IMO scoping exercise sensibly concluded that for MASS, “the COLREGS in its current form is still the reference point and should retain as much of its current content as possible.” With this directive in mind, the simplest and most direct way to deal with MASS is to amend the COLREGS to provide special lights, shapes, sound signals to identify autonomous operation. Along with this, it would be beneficial to add a new designation to AIS to identify autonomous operation. With the COLREGS amendment, the IMO should add a new COLREGS Annex specifying the technical requirements for autonomous systems, including quantifying the required detection and stand-off thresholds for approach situations, and specifying decision points for avoidance maneuvers. The goal of autonomous COLREGS compliance should be for the artificial intelligence at the heart of the system to be “explainable,” with every decision made by the system transparent and auditable by flag states and class societies. 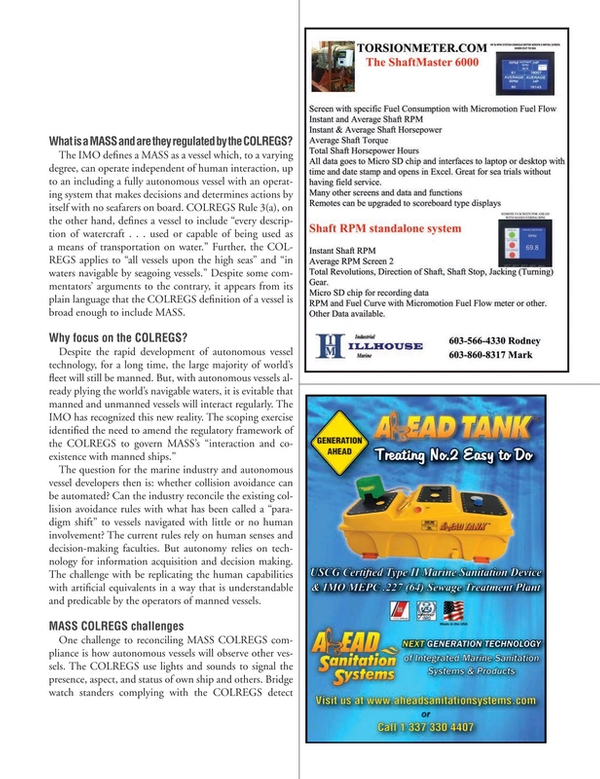 Other stories from July 2022 issue