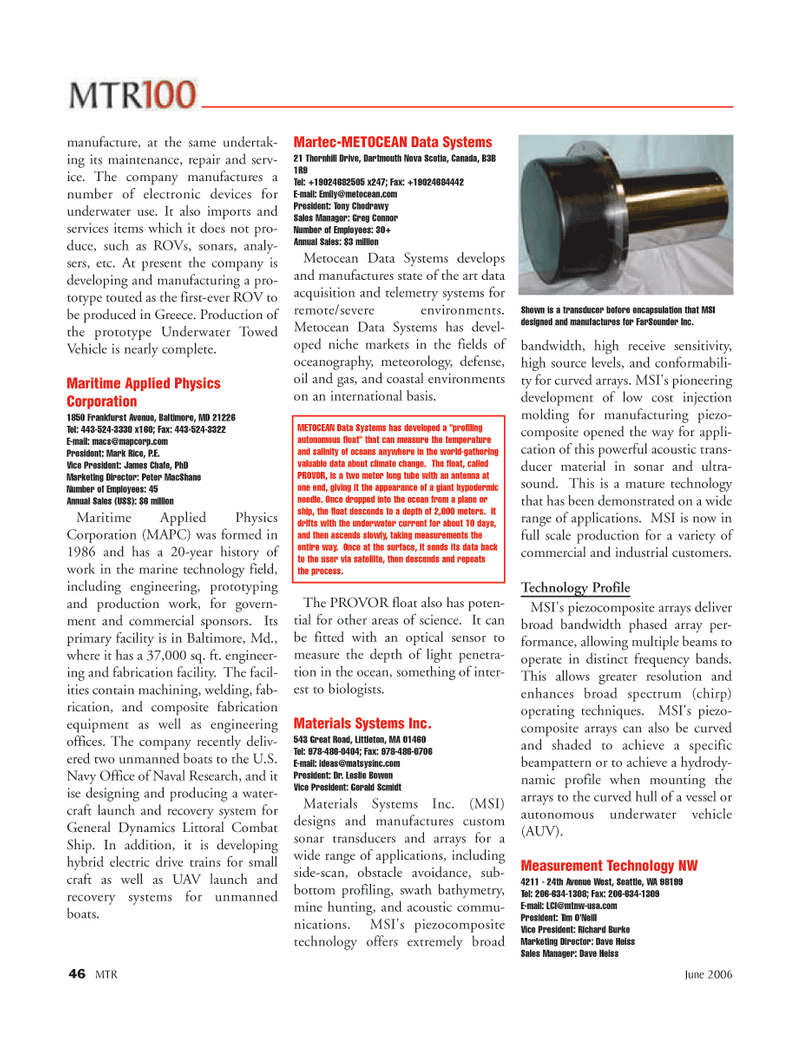 46 MTR June 2006 manufacture, at the same undertak- ing its maintenance, repair and serv- ice. The company manufactures a number of electronic devices for underwater use. It also imports and services items which it does not pro- duce, such as ROVs, sonars, analy- sers, etc. At present the company is developing and manufacturing a pro- totype touted as the first-ever ROV to be produced in Greece. Production of the prototype Underwater Towed

Corporation (MAPC) was formed in 1986 and has a 20-year history of work in the marine technology field, including engineering, prototyping and production work, for govern- ment and commercial sponsors. Its primary facility is in Baltimore, Md., where it has a 37,000 sq. ft. engineer- ing and fabrication facility. The facil- ities contain machining, welding, fab- rication, and composite fabrication equipment as well as engineering offices. The company recently deliv- ered two unmanned boats to the U.S.

Navy Office of Naval Research, and it ise designing and producing a water- craft launch and recovery system for

Ship. In addition, it is developing hybrid electric drive trains for small craft as well as UAV launch and recovery systems for unmanned boats.

Metocean Data Systems has devel- oped niche markets in the fields of oceanography, meteorology, defense, oil and gas, and coastal environments on an international basis.

The PROVOR float also has poten- tial for other areas of science. It can be fitted with an optical sensor to measure the depth of light penetra- tion in the ocean, something of inter- est to biologists.

This allows greater resolution and enhances broad spectrum (chirp) operating techniques. MSI's piezo- composite arrays can also be curved and shaded to achieve a specific beampattern or to achieve a hydrody- namic profile when mounting the arrays to the curved hull of a vessel or autonomous underwater vehicle (AUV).

METOCEAN Data Systems has developed a "profiling autonomous float" that can measure the temperature and salinity of oceans anywhere in the world-gathering valuable data about climate change. The float, called

PROVOR, is a two meter long tube with an antenna at one end, giving it the appearance of a giant hypodermic needle. Once dropped into the ocean from a plane or ship, the float descends to a depth of 2,000 meters. It drifts with the underwater current for about 10 days, and then ascends slowly, taking measurements the entire way. Once at the surface, it sends its data back to the user via satellite, then descends and repeats the process.

Shown is a transducer before encapsulation that MSI designed and manufactures for FarSounder Inc.