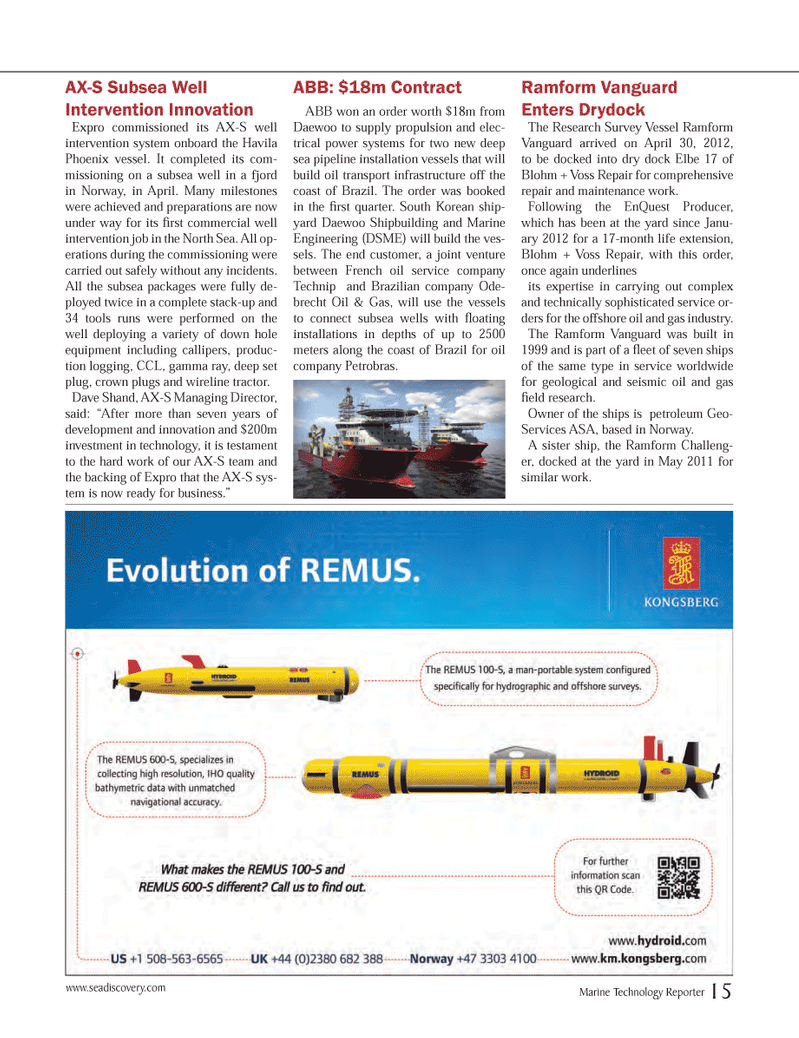 AX-S Subsea Well Intervention Innovation Expro commissioned its AX-S well intervention system onboard the Havila Phoenix vessel. It completed its com- missioning on a subsea well in a fjord in Norway, in April. Many milestones were achieved and preparations are now under way for its Þ rst commercial well intervention job in the North Sea. All op- erations during the commissioning were carried out safely without any incidents. All the subsea packages were fully de-ployed twice in a complete stack-up and 34 tools runs were performed on the well deploying a variety of down hole equipment including callipers, produc-tion logging, CCL, gamma ray, deep set plug, crown plugs and wireline tractor. Dave Shand, AX-S Managing Director, said: ÒAfter more than seven years of development and innovation and $200m investment in technology, it is testament to the hard work of our AX-S team and the backing of Expro that the AX-S sys- tem is now ready for business.Ó ABB: $18m Contract ABB won an order worth $18m from Daewoo to supply propulsion and elec- trical power systems for two new deep sea pipeline installation vessels that will build oil transport infrastructure off the coast of Brazil. The order was booked in the Þ rst quarter. South Korean ship- yard Daewoo Shipbuilding and Marine Engineering (DSME) will build the ves- sels. The end customer, a joint venture between French oil service company Technip and Brazilian company Ode- brecht Oil & Gas, will use the vessels to connect subsea wells with ß oating installations in depths of up to 2500 meters along the coast of Brazil for oil company Petrobras. Ramform Vanguard Enters Drydock The Research Survey Vessel Ramform Vanguard arrived on April 30, 2012, to be docked into dry dock Elbe 17 of Blohm + Voss Repair for comprehensive repair and maintenance work. Following the EnQuest Producer, which has been at the yard since Janu-ary 2012 for a 17-month life extension, Blohm + Voss Repair, with this order, once again underlinesits expertise in carrying out complex and technically sophisticated service or- ders for the offshore oil and gas industry. The Ramform Vanguard was built in 1999 and is part of a ß eet of seven ships of the same type in service worldwide for geological and seismic oil and gas Þ eld research. Owner of the ships is petroleum Geo-Services ASA, based in Norway. A sister ship, the Ramform Challeng-er, docked at the yard in May 2011 for similar work. Marine Technology Reporter 15www.seadiscovery.com MTR #5 (1-17).indd 15MTR #5 (1-17).indd 155/31/2012 2:05:01 PM5/31/2012 2:05:01 PM