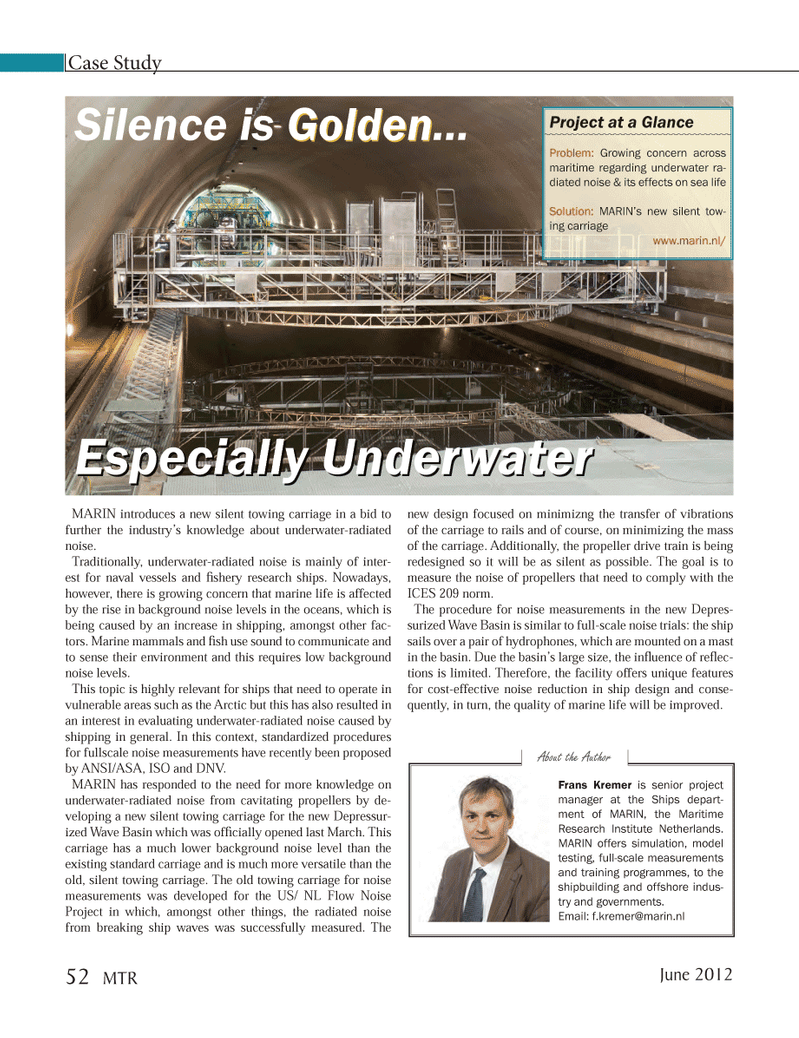 MARIN introduces a new silent towing carriage in a bid to further the industry?s knowledge about underwater-radiated noise.Traditionally, underwater-radiated noise is mainly of inter- est for naval vessels and  shery research ships. Nowadays, however, there is growing concern that marine life is affected by the rise in background noise levels in the oceans, which is being caused by an increase in shipping, amongst other fac- tors. Marine mammals and  sh use sound to communicate and to sense their environment and this requires low background noise levels. This topic is highly relevant for ships that need to operate in vulnerable areas such as the Arctic but this has also resulted in an interest in evaluating underwater-radiated noise caused by shipping in general. In this context, standardized procedures for fullscale noise measurements have recently been proposed by ANSI/ASA, ISO and DNV. MARIN has responded to the need for more knowledge on underwater-radiated noise from cavitating propellers by de- veloping a new silent towing carriage for the new Depressur- ized Wave Basin which was of cially opened last March. This carriage has a much lower background noise level than the existing standard carriage and is much more versatile than the old, silent towing carriage. The old towing carriage for noise measurements was developed for the US/ NL Flow Noise Project in which, amongst other things, the radiated noise from breaking ship waves was successfully measured. The new design focused on minimizng the transfer of vibrations of the carriage to rails and of course, on minimizing the mass of the carriage. Additionally, the propeller drive train is being redesigned so it will be as silent as possible. The goal is to measure the noise of propellers that need to comply with the ICES 209 norm. The procedure for noise measurements in the new Depres- surized Wave Basin is similar to full-scale noise trials: the ship sails over a pair of hydrophones, which are mounted on a mast in the basin. Due the basin?s large size, the in uence of re ec-tions is limited. Therefore, the facility offers unique features for cost-effective noise reduction in ship design and conse- quently, in turn, the quality of marine life will be improved. Case Study Especially Underwater GoldenSilence is Golden... Especially Underwater About the AuthorFrans Kremer is senior project manager at the Ships depart- ment of MARIN, the Maritime Research Institute Netherlands. MARIN offers simulation, model testing, full-scale measurements and training programmes, to the shipbuilding and offshore indus- try and governments. Email: [email protected] at a GlanceProblem: Growing concern across maritime regarding underwater ra- diated noise & its effects on sea life Solution: MARIN?s new silent tow- ing carriagewww.marin.nl/ June 201252 MTRMTR #5 (50-64).indd 52MTR #5 (50-64).indd 525/31/2012 1:19:15 PM5/31/2012 1:19:15 PM