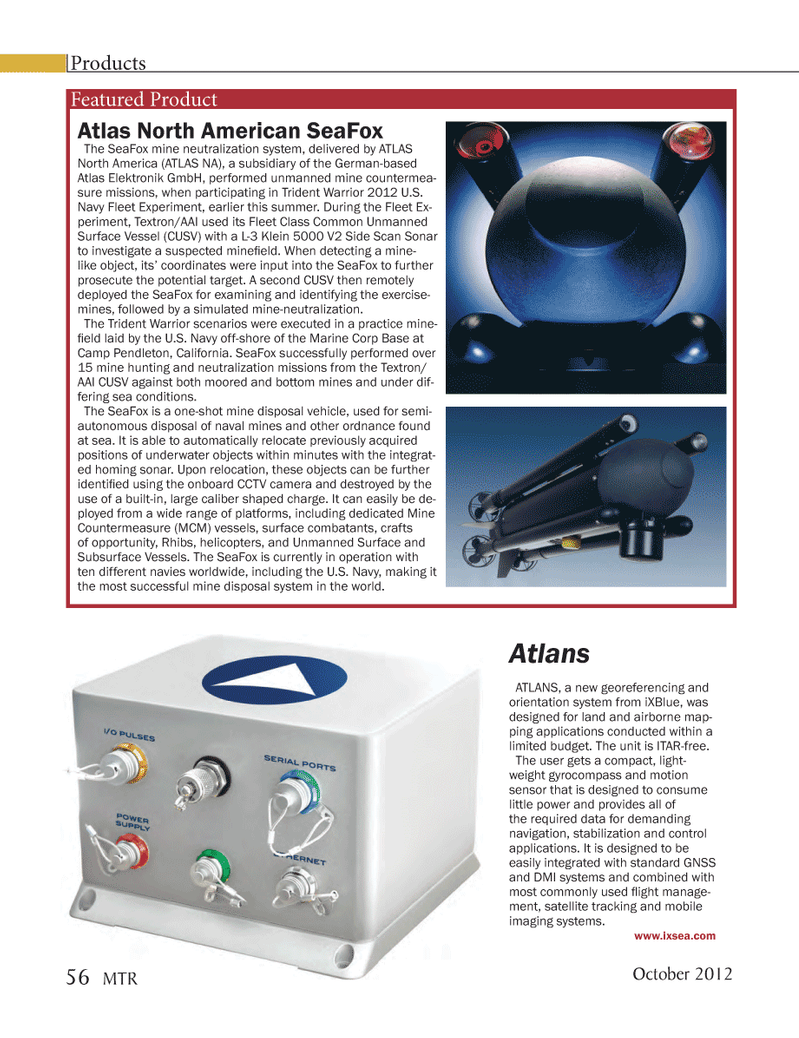 Products Featured Product Atlas North American SeaFox The SeaFox mine neutralization system, delivered by ATLAS North America (ATLAS NA), a subsidiary of the German-based Atlas Elektronik GmbH, performed unmanned mine countermea- sure missions, when participating in Trident Warrior 2012 U.S. Navy Fleet Experiment, earlier this summer. During the Fleet Ex- periment, Textron/AAI used its Fleet Class Common Unmanned Surface Vessel (CUSV) with a L-3 Klein 5000 V2 Side Scan Sonar to investigate a suspected mine Þ eld. When detecting a mine- like object, its? coordinates were input into the SeaFox to further prosecute the potential target. A second CUSV then remotely deployed the SeaFox for examining and identifying the exercise- mines, followed by a simulated mine-neutralization. The Trident Warrior scenarios were executed in a practice mine- Þ eld laid by the U.S. Navy off-shore of the Marine Corp Base at Camp Pendleton, California. SeaFox successfully performed over 15 mine hunting and neutralization missions from the Textron/ AAI CUSV against both moored and bottom mines and under dif- fering sea conditions. The SeaFox is a one-shot mine disposal vehicle, used for semi- autonomous disposal of naval mines and other ordnance found at sea. It is able to automatically relocate previously acquired positions of underwater objects within minutes with the integrat- ed homing sonar. Upon relocation, these objects can be further identiÞ ed using the onboard CCTV camera and destroyed by the use of a built-in, large caliber shaped charge. It can easily be de-ployed from a wide range of platforms, including dedicated Mine Countermeasure (MCM) vessels, surface combatants, crafts of opportunity, Rhibs, helicopters, and Unmanned Surface and Subsurface Vessels. The SeaFox is currently in operation with ten different navies worldwide, including the U.S. Navy, making it the most successful mine disposal system in the world. AtlansATLANS, a new georeferencing and orientation system from iXBlue, was designed for land and airborne map- ping applications conducted within a limited budget. The unit is ITAR-free. The user gets a compact, light- weight gyrocompass and motion sensor that is designed to consume little power and provides all of the required data for demanding navigation, stabilization and control applications. It is designed to be easily integrated with standard GNSS and DMI systems and combined with most commonly used ß ight manage- ment, satellite tracking and mobile imaging systems. www.ixsea.com October 201256 MTRMTR #8 (50-64).indd 56MTR #8 (50-64).indd 5610/3/2012 2:44:04 PM10/3/2012 2:44:04 PM