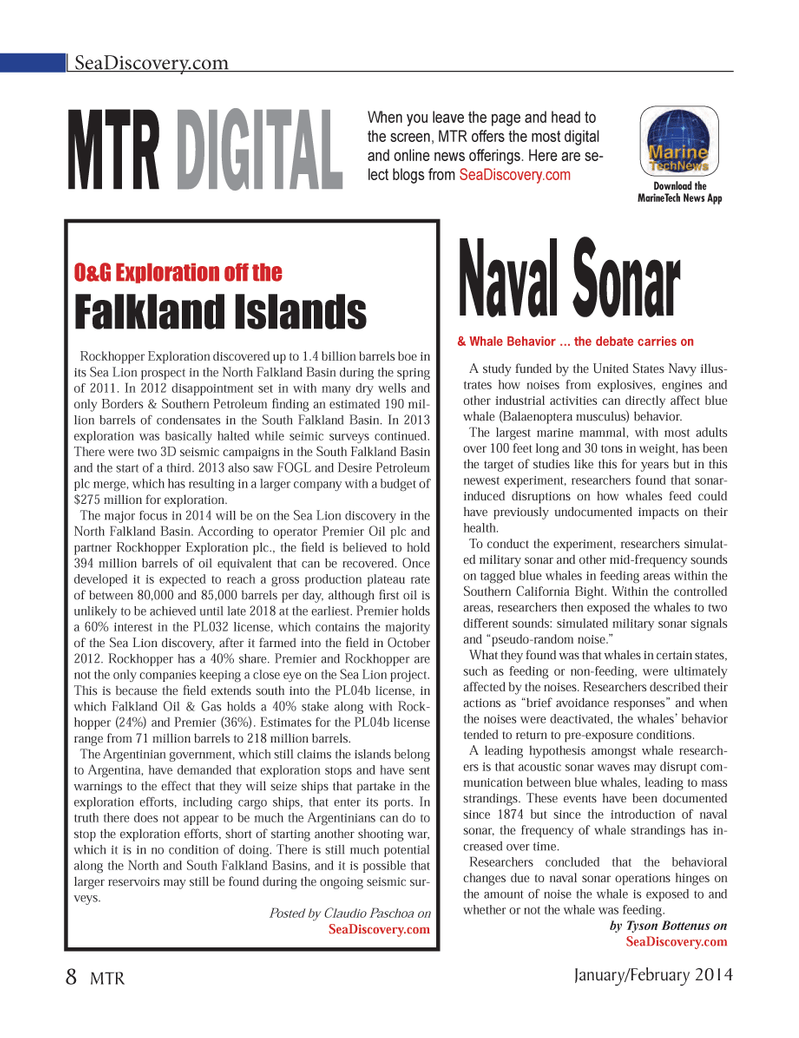 SeaDiscovery.com A study funded by the United States Navy illus- trates how noises from explosives, engines and other industrial activities can directly affect blue whale (Balaenoptera musculus) behavior. The largest marine mammal, with most adults over 100 feet long and 30 tons in weight, has been the target of studies like this for years but in this newest experiment, researchers found that sonar- induced disruptions on how whales feed could have previously undocumented impacts on their health. To conduct the experiment, researchers simulat- ed military sonar and other mid-frequency sounds on tagged blue whales in feeding areas within the Southern California Bight. Within the controlled areas, researchers then exposed the whales to two different sounds: simulated military sonar signals and ?pseudo-random noise.? What they found was that whales in certain states, such as feeding or non-feeding, were ultimately affected by the noises. Researchers described their actions as ?brief avoidance responses? and when the noises were deactivated, the whales? behavior tended to return to pre-exposure conditions. A leading hypothesis amongst whale research-ers is that acoustic sonar waves may disrupt com- munication between blue whales, leading to mass strandings. These events have been documented since 1874 but since the introduction of naval sonar, the frequency of whale strandings has in- creased over time. Researchers concluded that the behavioral changes due to naval sonar operations hinges on the amount of noise the whale is exposed to and whether or not the whale was feeding. by Tyson Bottenus on SeaDiscovery.com MTR DIGITAL When you leave the page and head to the screen, MTR offers the most digital and online news offerings. Here are se- lect blogs from SeaDiscovery.com O&G Exploration off the Falkland IslandsRockhopper Exploration discovered up to 1.4 billion barrels boe in its Sea Lion prospect in the North Falkland Basin during the spring of 2011. In 2012 disappointment set in with many dry wells and only Borders & Southern Petroleum  nding an estimated 190 mil- lion barrels of condensates in the South Falkland Basin. In 2013 exploration was basically halted while seimic surveys continued. There were two 3D seismic campaigns in the South Falkland Basin and the start of a third. 2013 also saw FOGL and Desire Petroleum plc merge, which has resulting in a larger company with a budget of $275 million for exploration. The major focus in 2014 will be on the Sea Lion discovery in the North Falkland Basin. According to operator Premier Oil plc and partner Rockhopper Exploration plc., the  eld is believed to hold 394 million barrels of oil equivalent that can be recovered. Once developed it is expected to reach a gross production plateau rate of between 80,000 and 85,000 barrels per day, although  rst oil is unlikely to be achieved until late 2018 at the earliest. Premier holds a 60% interest in the PL032 license, which contains the majority of the Sea Lion discovery, after it farmed into the  eld in October 2012. Rockhopper has a 40% share. Premier and Rockhopper are not the only companies keeping a close eye on the Sea Lion project. This is because the  eld extends south into the PL04b license, in which Falkland Oil & Gas holds a 40% stake along with Rock- hopper (24%) and Premier (36%). Estimates for the PL04b license range from 71 million barrels to 218 million barrels.The Argentinian government, which still claims the islands belong to Argentina, have demanded that exploration stops and have sent warnings to the effect that they will seize ships that partake in the exploration efforts, including cargo ships, that enter its ports. In truth there does not appear to be much the Argentinians can do to stop the exploration efforts, short of starting another shooting war, which it is in no condition of doing. There is still much potential along the North and South Falkland Basins, and it is possible that larger reservoirs may still be found during the ongoing seismic sur- veys. Posted by Claudio Paschoa on SeaDiscovery.com Naval Sonar& Whale Behavior ... the debate carries onDownload the MarineTech News App January/February 2014 8 MTRMTR #1 (1-17).indd 8MTR #1 (1-17).indd 81/24/2014 12:32:05 PM1/24/2014 12:32:05 PM