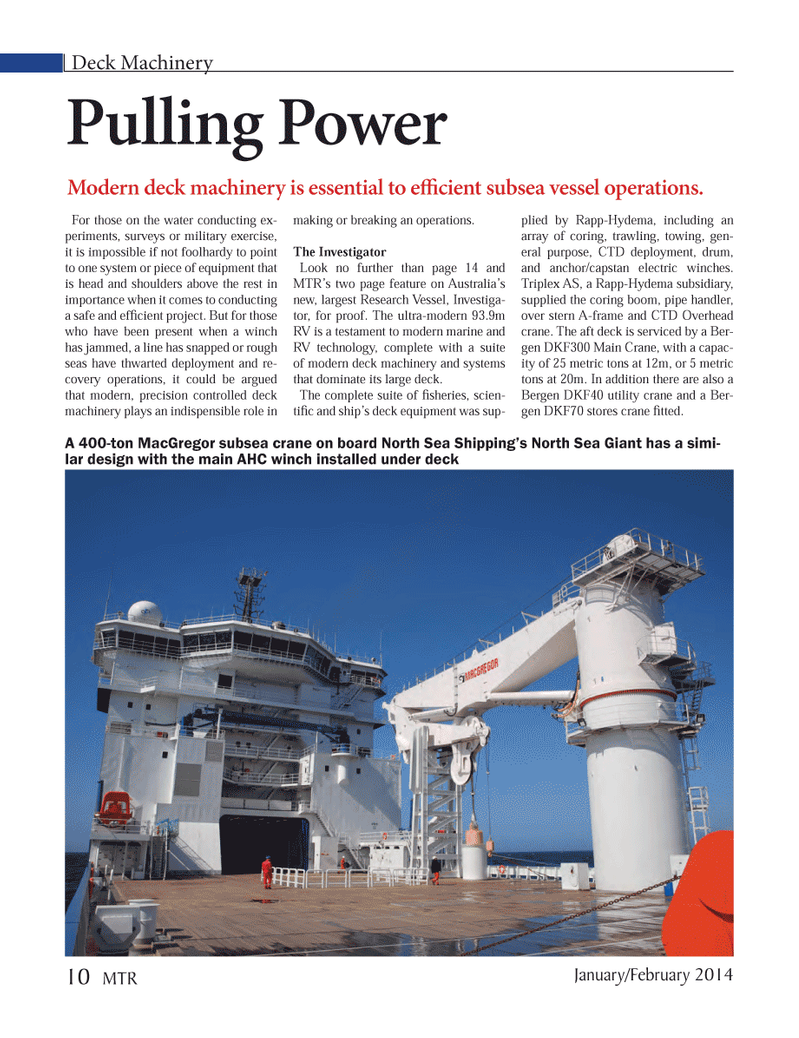 Deck Machinery For those on the water conducting ex- periments, surveys or military exercise, it is impossible if not foolhardy to point to one system or piece of equipment that is head and shoulders above the rest in importance when it comes to conducting a safe and efÞ cient project. But for those who have been present when a winch has jammed, a line has snapped or rough seas have thwarted deployment and re- covery operations, it could be argued that modern, precision controlled deck machinery plays an indispensible role in making or breaking an operations.The Investigator Look no further than page 14 and MTRÕs two page feature on AustraliaÕs new, largest Research Vessel, Investiga- tor, for proof. The ultra-modern 93.9m RV is a testament to modern marine and RV technology, complete with a suite of modern deck machinery and systems that dominate its large deck. The complete suite of Þ sheries, scien- tiÞ c and shipÕs deck equipment was sup- plied by Rapp-Hydema, including an array of coring, trawling, towing, gen- eral purpose, CTD deployment, drum, and anchor/capstan electric winches. Triplex AS, a Rapp-Hydema subsidiary, supplied the coring boom, pipe handler, over stern A-frame and CTD Overhead crane. The aft deck is serviced by a Ber- gen DKF300 Main Crane, with a capac-ity of 25 metric tons at 12m, or 5 metric tons at 20m. In addition there are also a Bergen DKF40 utility crane and a Ber- gen DKF70 stores crane Þ tted.A 400-ton MacGregor subsea crane on board North Sea Shipping?s North Sea Giant has a simi- lar design with the main AHC winch installed under deck Modern deck machinery is essential to e cient subsea vessel operations. Pulling Power Pulling Power January/February 2014 10 MTRMTR #1 (1-17).indd 10MTR #1 (1-17).indd 101/24/2014 12:33:57 PM1/24/2014 12:33:57 PM