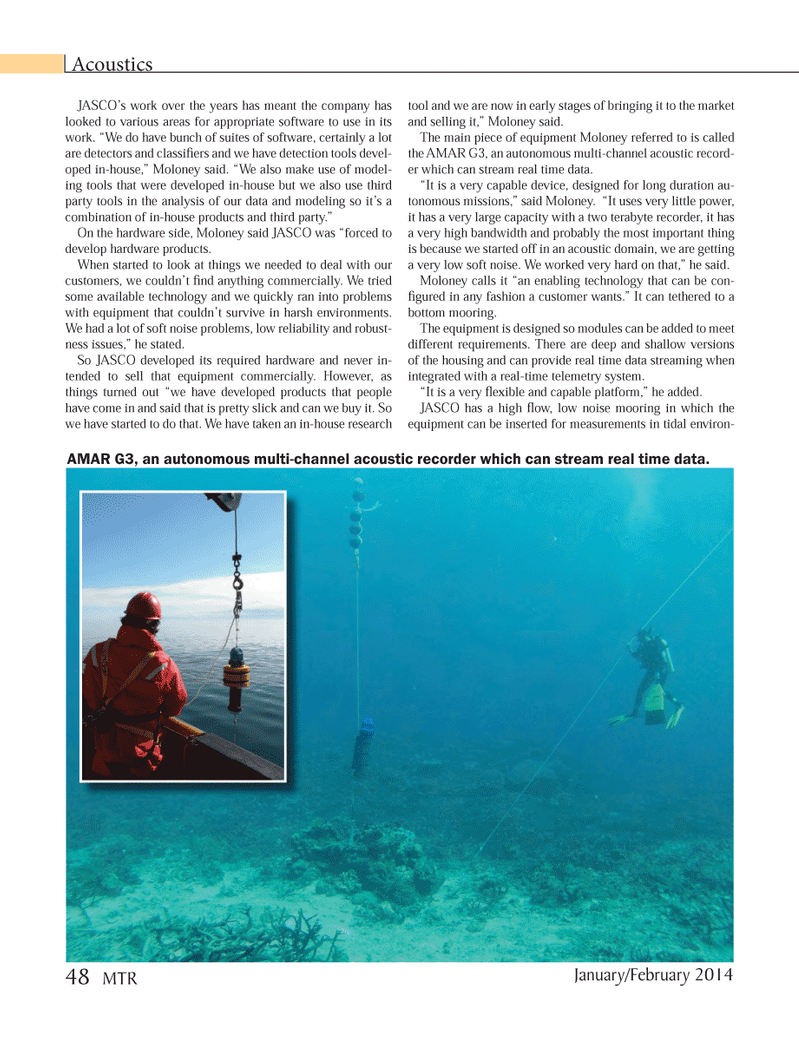 Acoustics JASCO?s work over the years has meant the company has looked to various areas for appropriate software to use in its work. ?We do have bunch of suites of software, certainly a lot are detectors and classi ers and we have detection tools devel- oped in-house,? Moloney said. ?We also make use of model- ing tools that were developed in-house but we also use third party tools in the analysis of our data and modeling so it?s a combination of in-house products and third party.? On the hardware side, Moloney said JASCO was ?forced to develop hardware products. When started to look at things we needed to deal with our customers, we couldn?t  nd anything commercially. We tried some available technology and we quickly ran into problems with equipment that couldn?t survive in harsh environments. We had a lot of soft noise problems, low reliability and robust- ness issues,? he stated. So JASCO developed its required hardware and never in- tended to sell that equipment commercially. However, as things turned out ?we have developed products that people have come in and said that is pretty slick and can we buy it. So we have started to do that. We have taken an in-house research tool and we are now in early stages of bringing it to the market and selling it,? Moloney said. The main piece of equipment Moloney referred to is called the AMAR G3, an autonomous multi-channel acoustic record- er which can stream real time data.?It is a very capable device, designed for long duration au- tonomous missions,? said Moloney. ?It uses very little power, it has a very large capacity with a two terabyte recorder, it has a very high bandwidth and probably the most important thing is because we started off in an acoustic domain, we are getting a very low soft noise. We worked very hard on that,? he said. Moloney calls it ?an enabling technology that can be con-  gured in any fashion a customer wants.? It can tethered to a bottom mooring. The equipment is designed so modules can be added to meet different requirements. There are deep and shallow versions of the housing and can provide real time data streaming when integrated with a real-time telemetry system. ?It is a very  exible and capable platform,? he added. JASCO has a high  ow, low noise mooring in which the equipment can be inserted for measurements in tidal environ- AMAR G3, an autonomous multi-channel acoustic recorder which can stream real time data. January/February 2014 48 MTRMTR #1 (34-49).indd 48MTR #1 (34-49).indd 481/23/2014 10:57:46 AM1/23/2014 10:57:46 AM