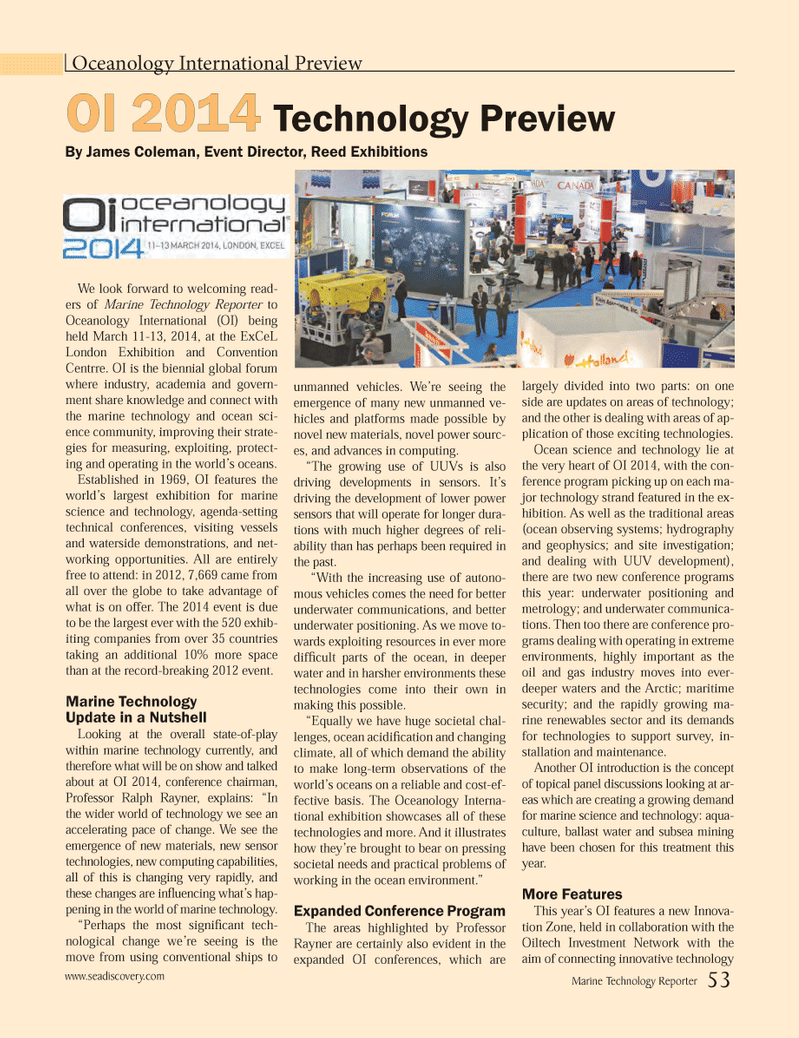 www.seadiscovery.com Marine Technology Reporter 53Oceanology International Preview We look forward to welcoming read- ers of Marine Technology Reporter to Oceanology International (OI) being held March 11-13, 2014, at the ExCeL London Exhibition and Convention Centrre. OI is the biennial global forum where industry, academia and govern- ment share knowledge and connect with the marine technology and ocean sci-ence community, improving their strate- gies for measuring, exploiting, protect- ing and operating in the world?s oceans. Established in 1969, OI features the world?s largest exhibition for marine science and technology, agenda-setting technical conferences, visiting vessels and waterside demonstrations, and net- working opportunities. All are entirely free to attend: in 2012, 7,669 came from all over the globe to take advantage of what is on offer. The 2014 event is due to be the largest ever with the 520 exhib- iting companies from over 35 countries taking an additional 10% more space than at the record-breaking 2012 event. Marine Technology Update in a NutshellLooking at the overall state-of-play within marine technology currently, and therefore what will be on show and talked about at OI 2014, conference chairman, Professor Ralph Rayner, explains: ?In the wider world of technology we see an accelerating pace of change. We see the emergence of new materials, new sensor technologies, new computing capabilities, all of this is changing very rapidly, and these changes are in uencing what?s hap- pening in the world of marine technology. ?Perhaps the most signi cant tech- nological change we?re seeing is the move from using conventional ships to unmanned vehicles. We?re seeing the emergence of many new unmanned ve- hicles and platforms made possible by novel new materials, novel power sourc- es, and advances in computing. ?The growing use of UUVs is also driving developments in sensors. It?s driving the development of lower power sensors that will operate for longer dura-tions with much higher degrees of reli- ability than has perhaps been required in the past. ?With the increasing use of autono- mous vehicles comes the need for better underwater communications, and better underwater positioning. As we move to- wards exploiting resources in ever more dif cult parts of the ocean, in deeper water and in harsher environments these technologies come into their own in making this possible. ?Equally we have huge societal chal- lenges, ocean acidi cation and changing climate, all of which demand the ability to make long-term observations of the world?s oceans on a reliable and cost-ef- fective basis. The Oceanology Interna- tional exhibition showcases all of these technologies and more. And it illustrates how they?re brought to bear on pressing societal needs and practical problems of working in the ocean environment.? Expanded Conference Program The areas highlighted by Professor Rayner are certainly also evident in the expanded OI conferences, which are largely divided into two parts: on one side are updates on areas of technology; and the other is dealing with areas of ap-plication of those exciting technologies. Ocean science and technology lie at the very heart of OI 2014, with the con- ference program picking up on each ma-jor technology strand featured in the ex- hibition. As well as the traditional areas (ocean observing systems; hydrography and geophysics; and site investigation; and dealing with UUV development), there are two new conference programs this year: underwater positioning and metrology; and underwater communica- tions. Then too there are conference pro- grams dealing with operating in extreme environments, highly important as the oil and gas industry moves into ever- deeper waters and the Arctic; maritime security; and the rapidly growing ma- rine renewables sector and its demands for technologies to support survey, in- stallation and maintenance. Another OI introduction is the concept of topical panel discussions looking at ar- eas which are creating a growing demand for marine science and technology: aqua-culture, ballast water and subsea mining have been chosen for this treatment this year. More Features This year?s OI features a new Innova- tion Zone, held in collaboration with the Oiltech Investment Network with the aim of connecting innovative technology OI 2014 OI 2014 Technology Preview By James Coleman, Event Director, Reed Exhibitions MTR #1 (50-64).indd 53MTR #1 (50-64).indd 531/24/2014 10:02:43 AM1/24/2014 10:02:43 AM