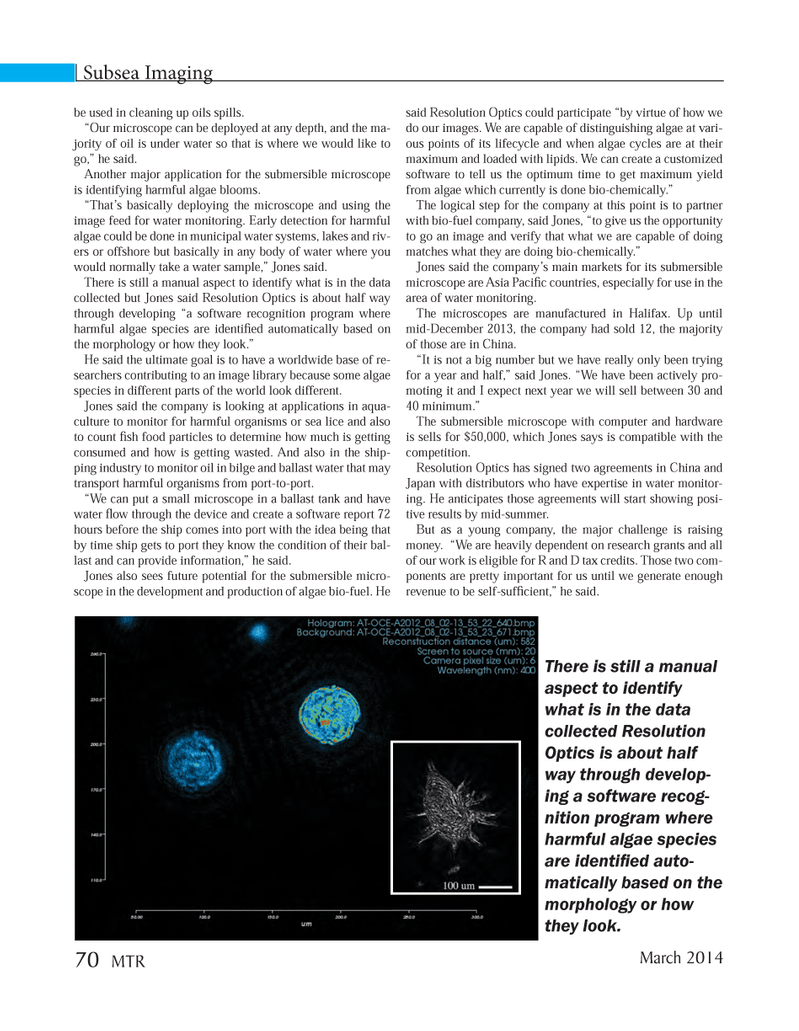 be used in cleaning up oils spills.?Our microscope can be deployed at any depth, and the ma- jority of oil is under water so that is where we would like to go,? he said. Another major application for the submersible microscope is identifying harmful algae blooms.?That?s basically deploying the microscope and using the image feed for water monitoring. Early detection for harmful algae could be done in municipal water systems, lakes and riv- ers or offshore but basically in any body of water where you would normally take a water sample,? Jones said. There is still a manual aspect to identify what is in the data collected but Jones said Resolution Optics is about half way through developing ?a software recognition program where harmful algae species are identi ed automatically based on the morphology or how they look.? He said the ultimate goal is to have a worldwide base of re- searchers contributing to an image library because some algae species in different parts of the world look different. Jones said the company is looking at applications in aqua- culture to monitor for harmful organisms or sea lice and also to count  sh food particles to determine how much is getting consumed and how is getting wasted. And also in the ship- ping industry to monitor oil in bilge and ballast water that may transport harmful organisms from port-to-port. ?We can put a small microscope in a ballast tank and have water  ow through the device and create a software report 72 hours before the ship comes into port with the idea being that by time ship gets to port they know the condition of their bal- last and can provide information,? he said. Jones also sees future potential for the submersible micro-scope in the development and production of algae bio-fuel. He said Resolution Optics could participate ?by virtue of how we do our images. We are capable of distinguishing algae at vari- ous points of its lifecycle and when algae cycles are at their maximum and loaded with lipids. We can create a customized software to tell us the optimum time to get maximum yield from algae which currently is done bio-chemically.? The logical step for the company at this point is to partner with bio-fuel company, said Jones, ?to give us the opportunity to go an image and verify that what we are capable of doing matches what they are doing bio-chemically.? Jones said the company?s main markets for its submersible microscope are Asia Paci c countries, especially for use in the area of water monitoring. The microscopes are manufactured in Halifax. Up until mid-December 2013, the company had sold 12, the majority of those are in China.?It is not a big number but we have really only been trying for a year and half,? said Jones. ?We have been actively pro- moting it and I expect next year we will sell between 30 and 40 minimum.? The submersible microscope with computer and hardware is sells for $50,000, which Jones says is compatible with the competition.Resolution Optics has signed two agreements in China and Japan with distributors who have expertise in water monitor- ing. He anticipates those agreements will start showing posi- tive results by mid-summer. But as a young company, the major challenge is raising money. ?We are heavily dependent on research grants and all of our work is eligible for R and D tax credits. Those two com- ponents are pretty important for us until we generate enough revenue to be self-suf cient,? he said. Subsea Imaging There is still a manual aspect to identify what is in the data collected Resolution Optics is about half way through develop- ing a software recog- nition program where harmful algae species are identiÞ ed auto- matically based on the morphology or how they look. March 2014 70 MTRMTR #2 (66-81).indd 70MTR #2 (66-81).indd 702/22/2014 1:58:35 PM2/22/2014 1:58:35 PM