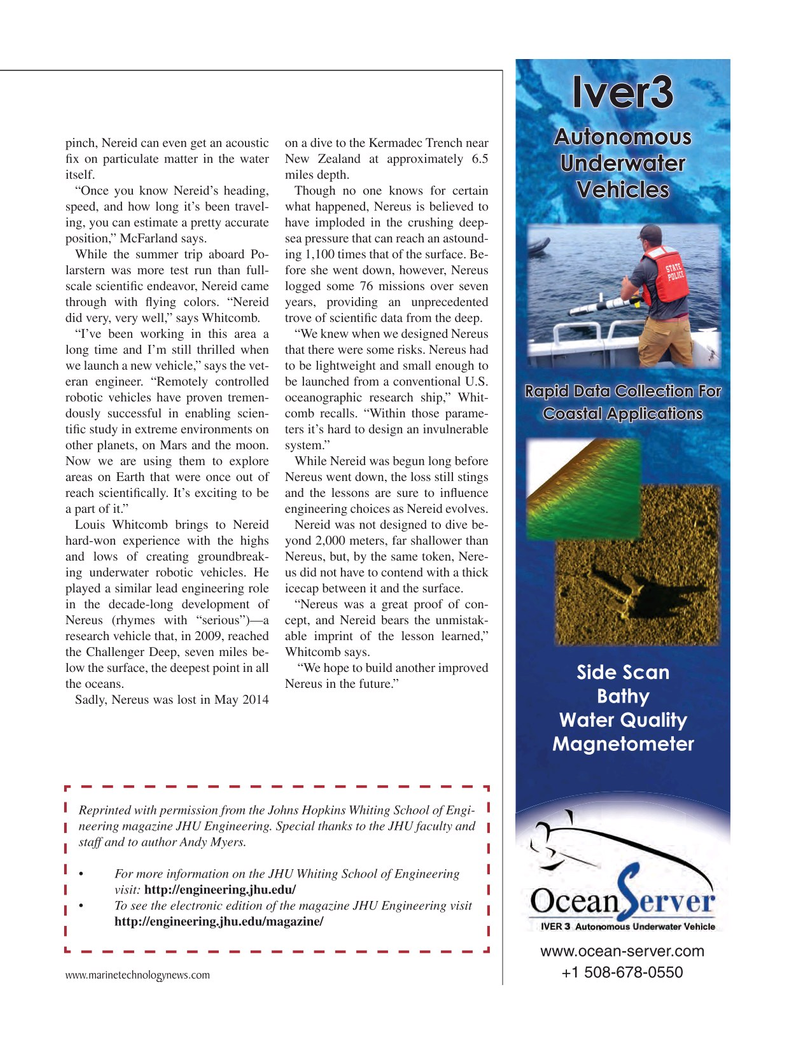 Autonomous pinch, Nereid can even get an acoustic on a dive to the Kermadec Trench near ? x on particulate matter in the water New Zealand at approximately 6.5

Underwater itself. miles depth. “Once you know Nereid’s heading, Though no one knows for certain

Vehicles speed, and how long it’s been travel- what happened, Nereus is believed to ing, you can estimate a pretty accurate have imploded in the crushing deep- position,” McFarland says. sea pressure that can reach an astound-

While the summer trip aboard Po- ing 1,100 times that of the surface. Be- larstern was more test run than full- fore she went down, however, Nereus scale scienti? c endeavor, Nereid came logged some 76 missions over seven through with ? ying colors. “Nereid years, providing an unprecedented did very, very well,” says Whitcomb. trove of scienti? c data from the deep.

“I’ve been working in this area a “We knew when we designed Nereus long time and I’m still thrilled when that there were some risks. Nereus had we launch a new vehicle,” says the vet- to be lightweight and small enough to eran engineer. “Remotely controlled be launched from a conventional U.S.

Coastal Applications ti? c study in extreme environments on ters it’s hard to design an invulnerable other planets, on Mars and the moon. system.”

Now we are using them to explore While Nereid was begun long before areas on Earth that were once out of Nereus went down, the loss still stings reach scienti? cally. It’s exciting to be and the lessons are sure to in? uence a part of it.” engineering choices as Nereid evolves.

Louis Whitcomb brings to Nereid Nereid was not designed to dive be- hard-won experience with the highs yond 2,000 meters, far shallower than and lows of creating groundbreak- Nereus, but, by the same token, Nere- ing underwater robotic vehicles. He us did not have to contend with a thick played a similar lead engineering role icecap between it and the surface.

Nereus (rhymes with “serious”)—a cept, and Nereid bears the unmistak- research vehicle that, in 2009, reached able imprint of the lesson learned,” the Challenger Deep, seven miles be- Whitcomb says.

low the surface, the deepest point in all “We hope to build another improved

Side Scan the oceans. Nereus in the future.”

Reprinted with permission from the Johns Hopkins Whiting School of Engi- neering magazine JHU Engineering. Special thanks to the JHU faculty and staff and to author Andy Myers.