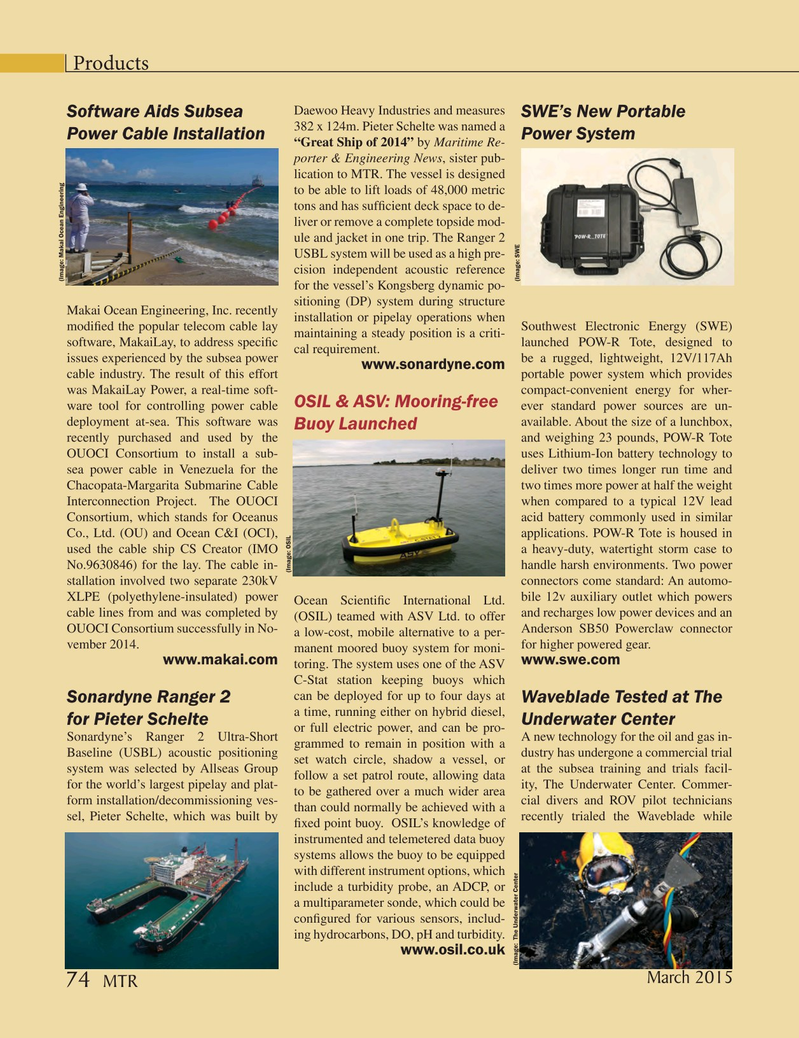 Power Cable Installation Power System “Great Ship of 2014” by Maritime Re- porter & Engineering News, sister pub- lication to MTR. The vessel is designed to be able to lift loads of 48,000 metric tons and has suf? cient deck space to de- liver or remove a complete topside mod- ule and jacket in one trip. The Ranger 2

OSIL & ASV: Mooring-free ware tool for controlling power cable ever standard power sources are un- deployment at-sea. This software was available. About the size of a lunchbox,

Buoy Launched recently purchased and used by the and weighing 23 pounds, POW-R Tote

Interconnection Project. The OUOCI when compared to a typical 12V lead

OUOCI Consortium successfully in No- Anderson SB50 Powerclaw connector a low-cost, mobile alternative to a per- vember 2014. for higher powered gear. manent moored buoy system for moni- www.makai.com www.swe.com toring. The system uses one of the ASV

Sonardyne Ranger 2 Waveblade Tested at The a time, running either on hybrid diesel, for Pieter Schelte Underwater Center

Sonardyne’s Ranger 2 Ultra-Short or full electric power, and can be pro-

Baseline (USBL) acoustic positioning grammed to remain in position with a A new technology for the oil and gas in- set watch circle, shadow a vessel, or dustry has undergone a commercial trial system was selected by Allseas Group follow a set patrol route, allowing data at the subsea training and trials facil- for the world’s largest pipelay and plat- to be gathered over a much wider area ity, The Underwater Center. Commer- form installation/decommissioning ves- cial divers and ROV pilot technicians than could normally be achieved with a sel, Pieter Schelte, which was built by ? xed point buoy. OSIL’s knowledge of recently trialed the Waveblade while instrumented and telemetered data buoy systems allows the buoy to be equipped with different instrument options, which include a turbidity probe, an ADCP, or a multiparameter sonde, which could be con? gured for various sensors, includ- ing hydrocarbons, DO, pH and turbidity. www.osil.co.uk (Image: The Underwater Center