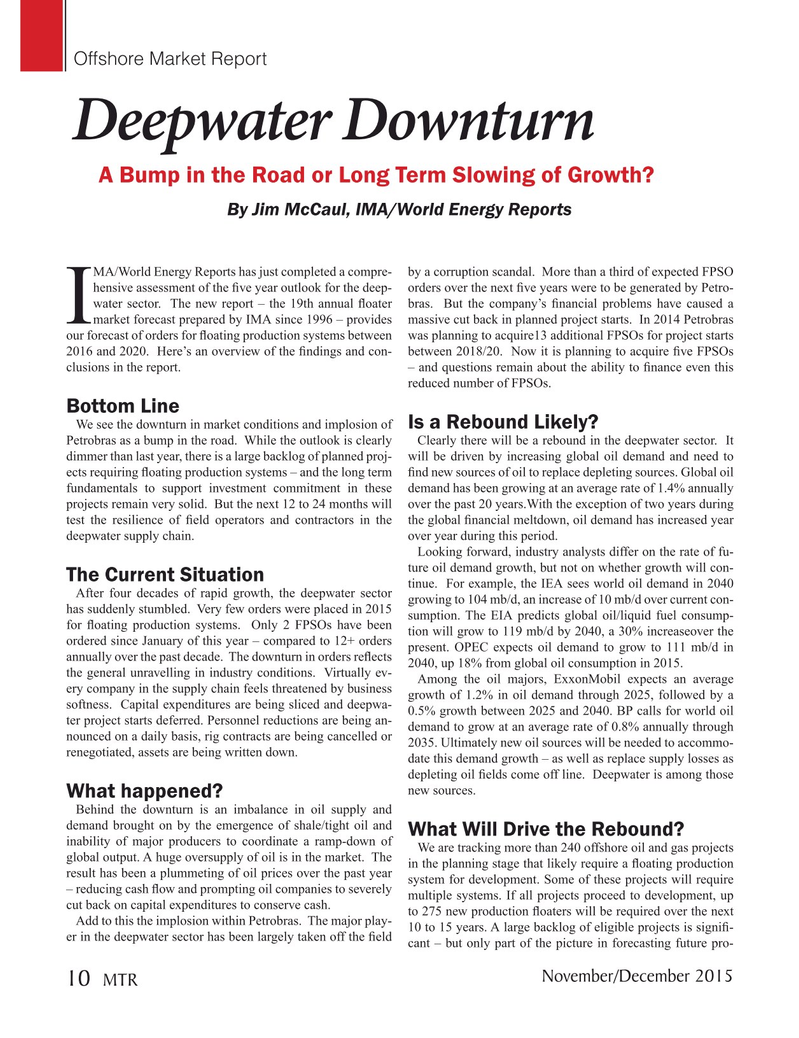 A Bump in the Road or Long Term Slowing of Growth?

MA/World Energy Reports has just completed a compre- by a corruption scandal. More than a third of expected FPSO hensive assessment of the ? ve year outlook for the deep- orders over the next ? ve years were to be generated by Petro- water sector. The new report – the 19th annual ? oater bras. But the company’s ? nancial problems have caused a

Imarket forecast prepared by IMA since 1996 – provides massive cut back in planned project starts. In 2014 Petrobras our forecast of orders for ? oating production systems between was planning to acquire13 additional FPSOs for project starts 2016 and 2020. Here’s an overview of the ? ndings and con- between 2018/20. Now it is planning to acquire ? ve FPSOs clusions in the report. – and questions remain about the ability to ? nance even this reduced number of FPSOs.

Is a Rebound Likely?

We see the downturn in market conditions and implosion of

Petrobras as a bump in the road. While the outlook is clearly Clearly there will be a rebound in the deepwater sector. It dimmer than last year, there is a large backlog of planned proj- will be driven by increasing global oil demand and need to ects requiring ? oating production systems – and the long term ? nd new sources of oil to replace depleting sources. Global oil fundamentals to support investment commitment in these demand has been growing at an average rate of 1.4% annually projects remain very solid. But the next 12 to 24 months will over the past 20 years.With the exception of two years during test the resilience of ? eld operators and contractors in the the global ? nancial meltdown, oil demand has increased year deepwater supply chain. over year during this period.

Looking forward, industry analysts differ on the rate of fu- ture oil demand growth, but not on whether growth will con-

The Current Situation tinue. For example, the IEA sees world oil demand in 2040

After four decades of rapid growth, the deepwater sector growing to 104 mb/d, an increase of 10 mb/d over current con- has suddenly stumbled. Very few orders were placed in 2015 sumption. The EIA predicts global oil/liquid fuel consump- for ? oating production systems. Only 2 FPSOs have been tion will grow to 119 mb/d by 2040, a 30% increaseover the ordered since January of this year – compared to 12+ orders present. OPEC expects oil demand to grow to 111 mb/d in annually over the past decade. The downturn in orders re? ects 2040, up 18% from global oil consumption in 2015. the general unravelling in industry conditions. Virtually ev-

Among the oil majors, ExxonMobil expects an average ery company in the supply chain feels threatened by business growth of 1.2% in oil demand through 2025, followed by a softness. Capital expenditures are being sliced and deepwa- 0.5% growth between 2025 and 2040. BP calls for world oil ter project starts deferred. Personnel reductions are being an- demand to grow at an average rate of 0.8% annually through nounced on a daily basis, rig contracts are being cancelled or 2035. Ultimately new oil sources will be needed to accommo- renegotiated, assets are being written down.

date this demand growth – as well as replace supply losses as depleting oil ? elds come off line. Deepwater is among those new sources.

What Will Drive the Rebound?

inability of major producers to coordinate a ramp-down of

We are tracking more than 240 offshore oil and gas projects global output. A huge oversupply of oil is in the market. The in the planning stage that likely require a ? oating production result has been a plummeting of oil prices over the past year system for development. Some of these projects will require – reducing cash ? ow and prompting oil companies to severely multiple systems. If all projects proceed to development, up cut back on capital expenditures to conserve cash.

to 275 new production ? oaters will be required over the next

Add to this the implosion within Petrobras. The major play- 10 to 15 years. A large backlog of eligible projects is signi? - er in the deepwater sector has been largely taken off the ? eld cant – but only part of the picture in forecasting future pro-