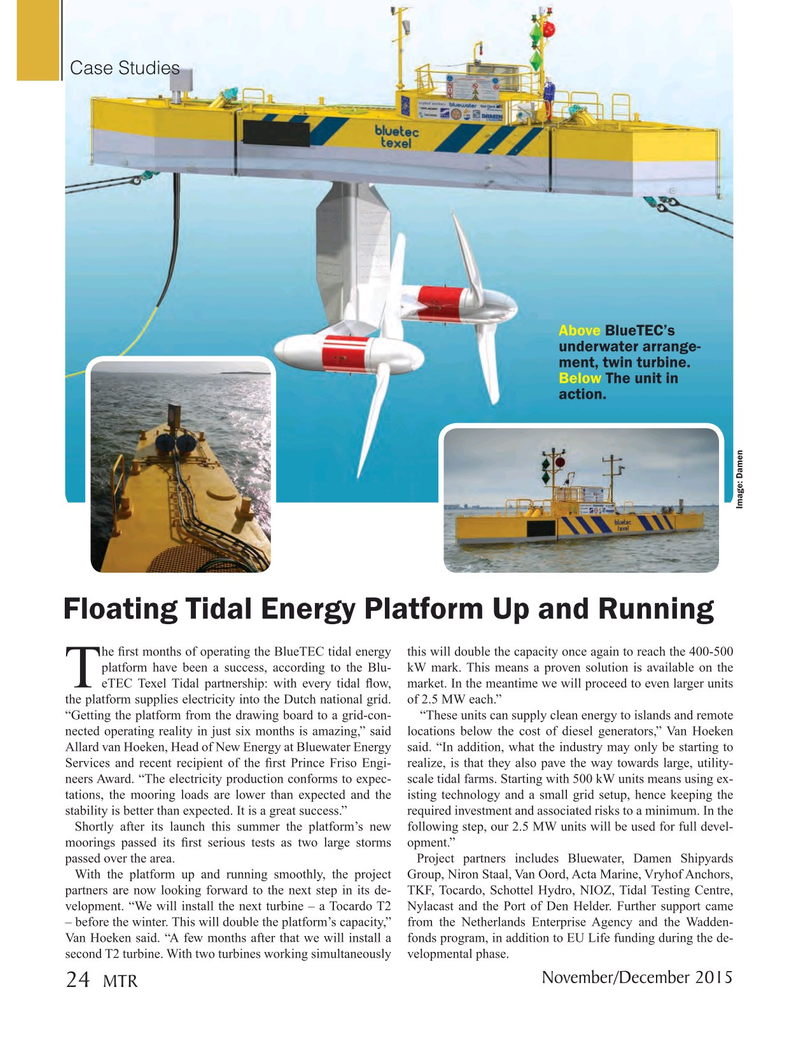 Below The unit in action.

Floating Tidal Energy Platform Up and Running he ? rst months of operating the BlueTEC tidal energy this will double the capacity once again to reach the 400-500 platform have been a success, according to the Blu- kW mark. This means a proven solution is available on the eTEC Texel Tidal partnership: with every tidal ? ow, market. In the meantime we will proceed to even larger units

T the platform supplies electricity into the Dutch national grid. of 2.5 MW each.” “Getting the platform from the drawing board to a grid-con- “These units can supply clean energy to islands and remote nected operating reality in just six months is amazing,” said locations below the cost of diesel generators,” Van Hoeken

Allard van Hoeken, Head of New Energy at Bluewater Energy said. “In addition, what the industry may only be starting to

Services and recent recipient of the ? rst Prince Friso Engi- realize, is that they also pave the way towards large, utility- neers Award. “The electricity production conforms to expec- scale tidal farms. Starting with 500 kW units means using ex- tations, the mooring loads are lower than expected and the isting technology and a small grid setup, hence keeping the stability is better than expected. It is a great success.” required investment and associated risks to a minimum. In the

With the platform up and running smoothly, the project Group, Niron Staal, Van Oord, Acta Marine, Vryhof Anchors, partners are now looking forward to the next step in its de- TKF, Tocardo, Schottel Hydro, NIOZ, Tidal Testing Centre, velopment. “We will install the next turbine – a Tocardo T2 Nylacast and the Port of Den Helder. Further support came – before the winter. This will double the platform’s capacity,” from the Netherlands Enterprise Agency and the Wadden-

Van Hoeken said. “A few months after that we will install a fonds program, in addition to EU Life funding during the de- second T2 turbine. With two turbines working simultaneously velopmental phase.