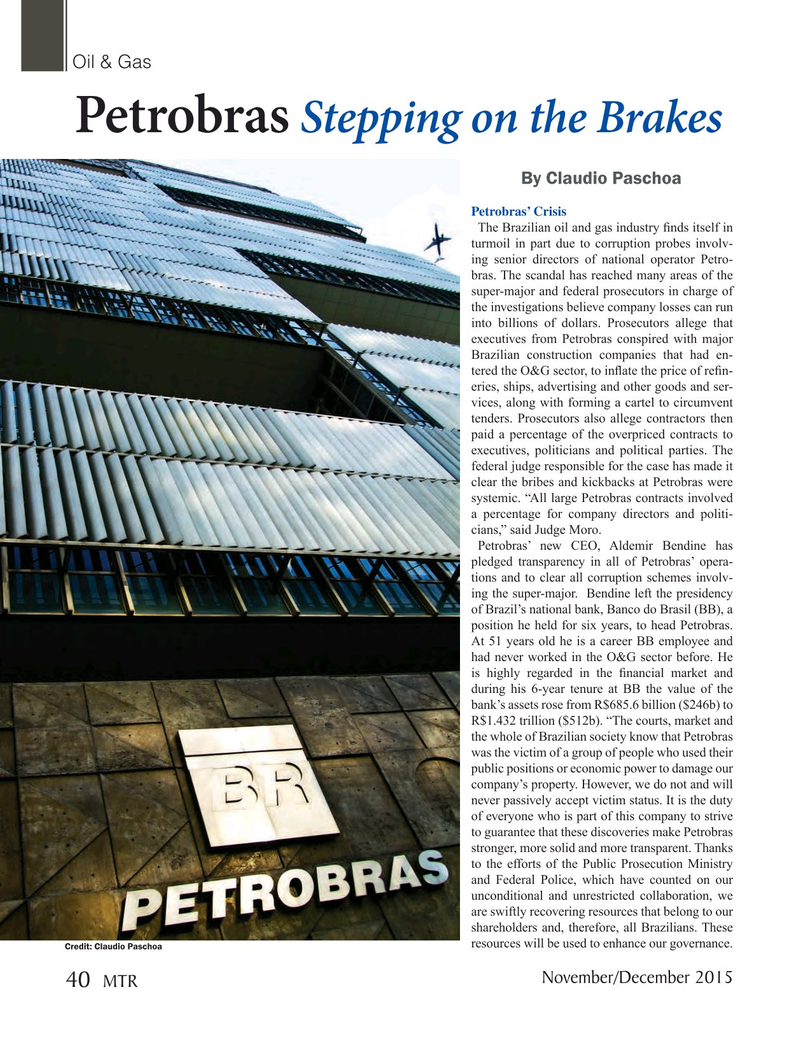 Petrobras Stepping on the Brakes

The Brazilian oil and gas industry ? nds itself in turmoil in part due to corruption probes involv- ing senior directors of national operator Petro- bras. The scandal has reached many areas of the super-major and federal prosecutors in charge of the investigations believe company losses can run into billions of dollars. Prosecutors allege that executives from Petrobras conspired with major

Brazilian construction companies that had en- tered the O&G sector, to in? ate the price of re? n- eries, ships, advertising and other goods and ser- vices, along with forming a cartel to circumvent tenders. Prosecutors also allege contractors then paid a percentage of the overpriced contracts to executives, politicians and political parties. The federal judge responsible for the case has made it clear the bribes and kickbacks at Petrobras were systemic. “All large Petrobras contracts involved a percentage for company directors and politi- cians,” said Judge Moro.

Petrobras’ new CEO, Aldemir Bendine has pledged transparency in all of Petrobras’ opera- tions and to clear all corruption schemes involv- ing the super-major. Bendine left the presidency of Brazil’s national bank, Banco do Brasil (BB), a position he held for six years, to head Petrobras.

At 51 years old he is a career BB employee and had never worked in the O&G sector before. He is highly regarded in the ? nancial market and during his 6-year tenure at BB the value of the bank’s assets rose from R$685.6 billion ($246b) to

R$1.432 trillion ($512b). “The courts, market and the whole of Brazilian society know that Petrobras was the victim of a group of people who used their public positions or economic power to damage our company’s property. However, we do not and will never passively accept victim status. It is the duty of everyone who is part of this company to strive to guarantee that these discoveries make Petrobras stronger, more solid and more transparent. Thanks to the efforts of the Public Prosecution Ministry and Federal Police, which have counted on our unconditional and unrestricted collaboration, we are swiftly recovering resources that belong to our shareholders and, therefore, all Brazilians. These resources will be used to enhance our governance.