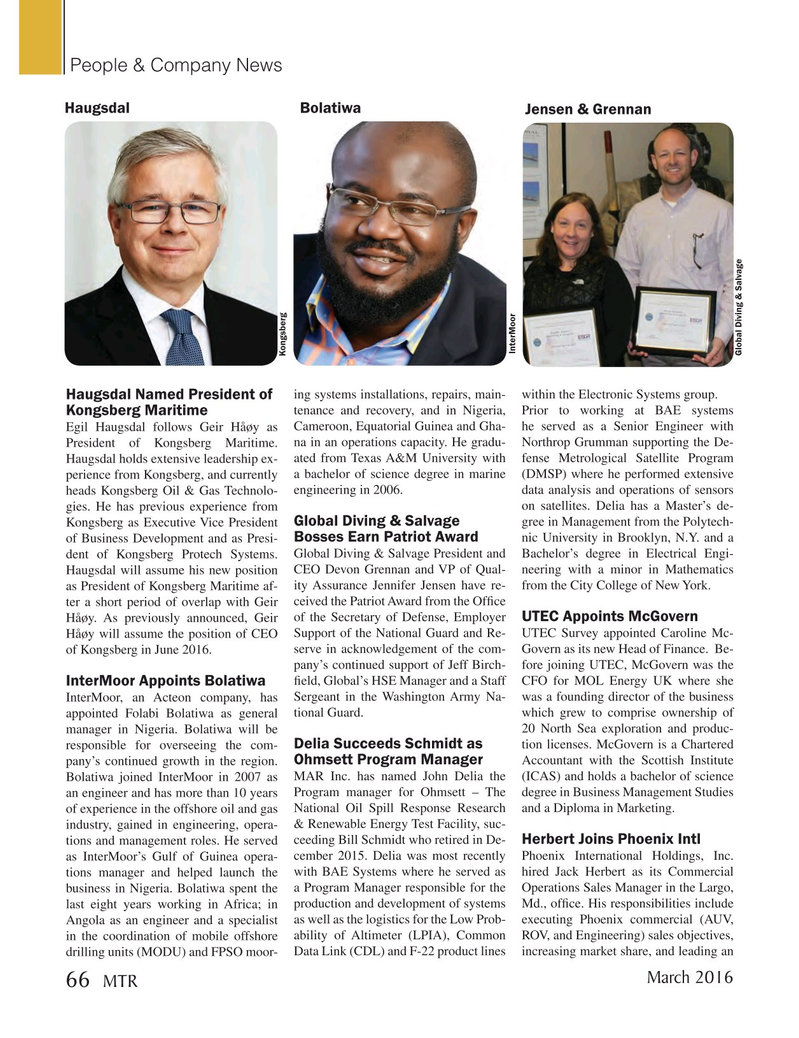 Haugsdal Named President of tenance and recovery, and in Nigeria, Prior to working at BAE systems

Egil Haugsdal follows Geir Håøy as Cameroon, Equatorial Guinea and Gha- he served as a Senior Engineer with

President of Kongsberg Maritime. na in an operations capacity. He gradu- Northrop Grumman supporting the De-

Haugsdal holds extensive leadership ex- ated from Texas A&M University with fense Metrological Satellite Program perience from Kongsberg, and currently a bachelor of science degree in marine (DMSP) where he performed extensive heads Kongsberg Oil & Gas Technolo- engineering in 2006. data analysis and operations of sensors gies. He has previous experience from on satellites. Delia has a Master’s de-

Kongsberg as Executive Vice President gree in Management from the Polytech-

Haugsdal will assume his new position CEO Devon Grennan and VP of Qual- neering with a minor in Mathematics as President of Kongsberg Maritime af- ity Assurance Jennifer Jensen have re- from the City College of New York.

ter a short period of overlap with Geir ceived the Patriot Award from the Of? ce

Håøy. As previously announced, Geir of the Secretary of Defense, Employer

Håøy will assume the position of CEO Support of the National Guard and Re- UTEC Survey appointed Caroline Mc- of Kongsberg in June 2016. serve in acknowledgement of the com- Govern as its new Head of Finance. Be- pany’s continued support of Jeff Birch- fore joining UTEC, McGovern was the ? eld, Global’s HSE Manager and a Staff CFO for MOL Energy UK where she

InterMoor, an Acteon company, has Sergeant in the Washington Army Na- was a founding director of the business appointed Folabi Bolatiwa as general tional Guard. which grew to comprise ownership of manager in Nigeria. Bolatiwa will be 20 North Sea exploration and produc-

Delia Succeeds Schmidt as responsible for overseeing the com- tion licenses. McGovern is a Chartered

Bolatiwa joined InterMoor in 2007 as MAR Inc. has named John Delia the (ICAS) and holds a bachelor of science an engineer and has more than 10 years Program manager for Ohmsett – The degree in Business Management Studies of experience in the offshore oil and gas National Oil Spill Response Research and a Diploma in Marketing.

Herbert Joins Phoenix Intl tions and management roles. He served ceeding Bill Schmidt who retired in De- as InterMoor’s Gulf of Guinea opera- cember 2015. Delia was most recently Phoenix International Holdings, Inc. tions manager and helped launch the with BAE Systems where he served as hired Jack Herbert as its Commercial business in Nigeria. Bolatiwa spent the a Program Manager responsible for the Operations Sales Manager in the Largo, last eight years working in Africa; in production and development of systems Md., of? ce. His responsibilities include

Angola as an engineer and a specialist as well as the logistics for the Low Prob- executing Phoenix commercial (AUV, in the coordination of mobile offshore ability of Altimeter (LPIA), Common ROV, and Engineering) sales objectives, drilling units (MODU) and FPSO moor- Data Link (CDL) and F-22 product lines increasing market share, and leading an