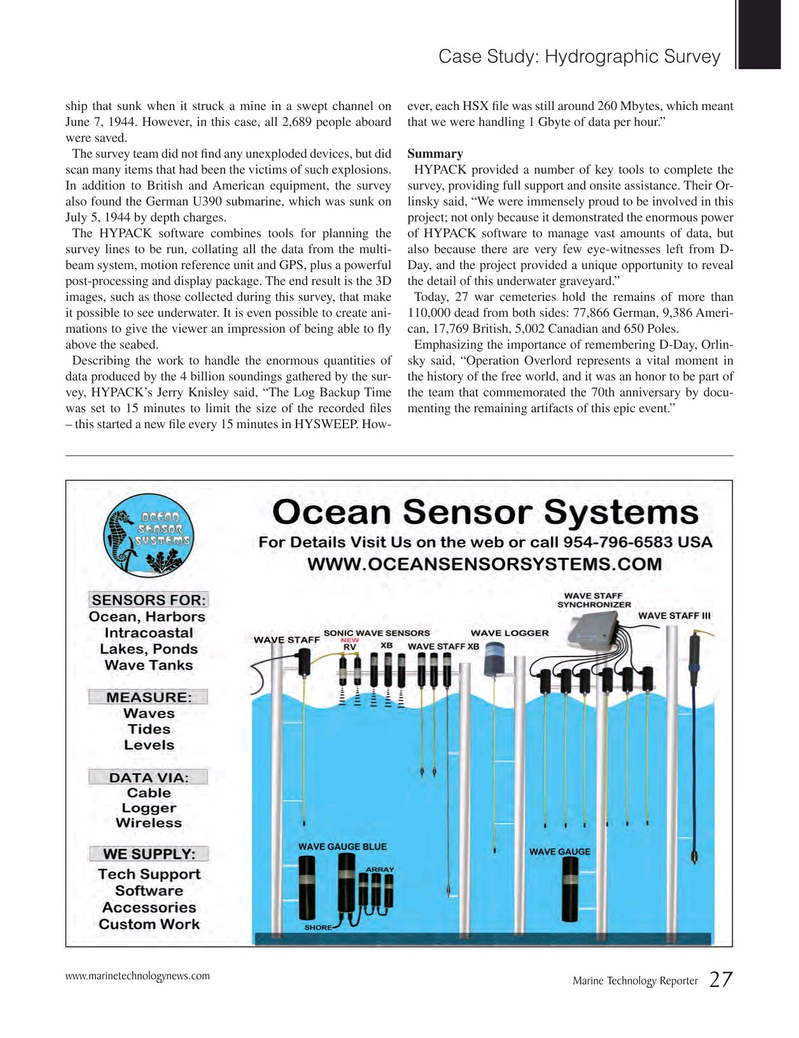 Case Study: Hydrographic Survey ship that sunk when it struck a mine in a swept channel on ever, each HSX ? le was still around 260 Mbytes, which meant

The survey team did not ? nd any unexploded devices, but did Summary scan many items that had been the victims of such explosions. HYPACK provided a number of key tools to complete the

In addition to British and American equipment, the survey survey, providing full support and onsite assistance. Their Or- also found the German U390 submarine, which was sunk on linsky said, “We were immensely proud to be involved in this

July 5, 1944 by depth charges. project; not only because it demonstrated the enormous power

The HYPACK software combines tools for planning the of HYPACK software to manage vast amounts of data, but survey lines to be run, collating all the data from the multi- also because there are very few eye-witnesses left from D- beam system, motion reference unit and GPS, plus a powerful Day, and the project provided a unique opportunity to reveal post-processing and display package. The end result is the 3D the detail of this underwater graveyard.” images, such as those collected during this survey, that make Today, 27 war cemeteries hold the remains of more than it possible to see underwater. It is even possible to create ani- 110,000 dead from both sides: 77,866 German, 9,386 Ameri- mations to give the viewer an impression of being able to ? y can, 17,769 British, 5,002 Canadian and 650 Poles.

above the seabed. Emphasizing the importance of remembering D-Day, Orlin-

Describing the work to handle the enormous quantities of sky said, “Operation Overlord represents a vital moment in data produced by the 4 billion soundings gathered by the sur- the history of the free world, and it was an honor to be part of vey, HYPACK’s Jerry Knisley said, “The Log Backup Time the team that commemorated the 70th anniversary by docu- was set to 15 minutes to limit the size of the recorded ? les menting the remaining artifacts of this epic event.” – this started a new ? le every 15 minutes in HYSWEEP. How- www.marinetechnologynews.com