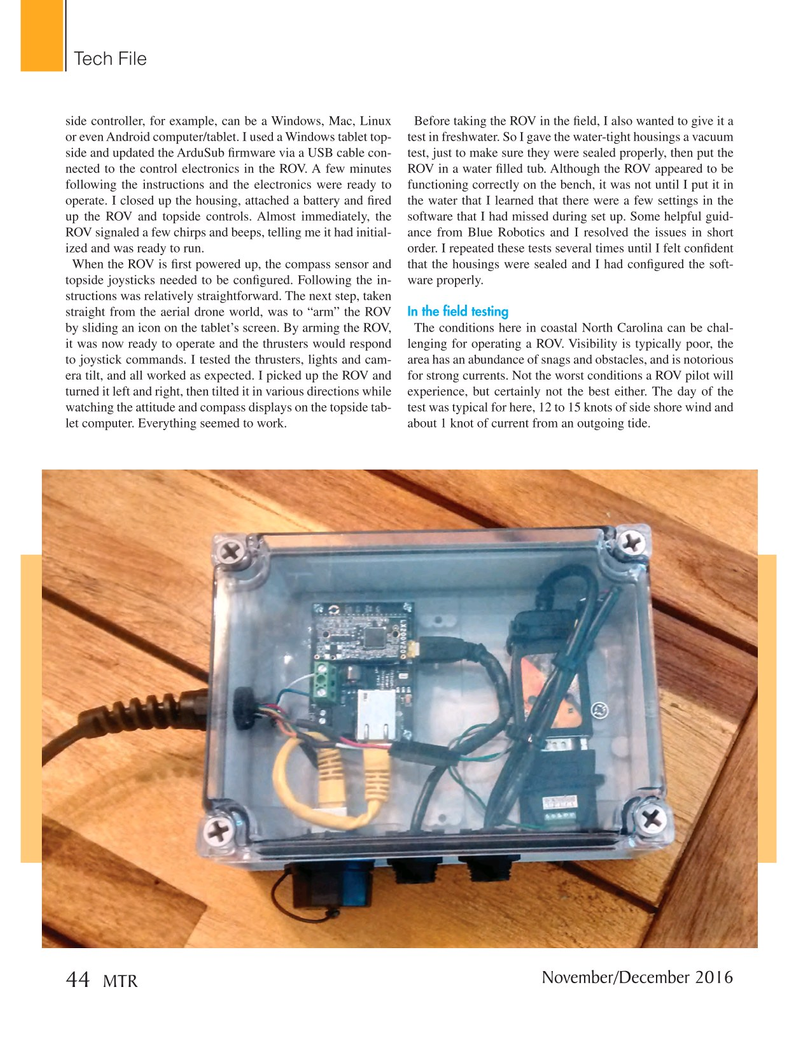 Tech File side controller, for example, can be a Windows, Mac, Linux Before taking the ROV in the ? eld, I also wanted to give it a or even Android computer/tablet. I used a Windows tablet top- test in freshwater. So I gave the water-tight housings a vacuum side and updated the ArduSub ? rmware via a USB cable con- test, just to make sure they were sealed properly, then put the nected to the control electronics in the ROV. A few minutes ROV in a water ? lled tub. Although the ROV appeared to be following the instructions and the electronics were ready to functioning correctly on the bench, it was not until I put it in operate. I closed up the housing, attached a battery and ? red the water that I learned that there were a few settings in the up the ROV and topside controls. Almost immediately, the software that I had missed during set up. Some helpful guid-

ROV signaled a few chirps and beeps, telling me it had initial- ance from Blue Robotics and I resolved the issues in short ized and was ready to run. order. I repeated these tests several times until I felt con? dent

When the ROV is ? rst powered up, the compass sensor and that the housings were sealed and I had con? gured the soft- topside joysticks needed to be con? gured. Following the in- ware properly.

structions was relatively straightforward. The next step, taken straight from the aerial drone world, was to “arm” the ROV In the ? eld testing by sliding an icon on the tablet’s screen. By arming the ROV, The conditions here in coastal North Carolina can be chal- it was now ready to operate and the thrusters would respond lenging for operating a ROV. Visibility is typically poor, the to joystick commands. I tested the thrusters, lights and cam- area has an abundance of snags and obstacles, and is notorious era tilt, and all worked as expected. I picked up the ROV and for strong currents. Not the worst conditions a ROV pilot will turned it left and right, then tilted it in various directions while experience, but certainly not the best either. The day of the watching the attitude and compass displays on the topside tab- test was typical for here, 12 to 15 knots of side shore wind and let computer. Everything seemed to work. about 1 knot of current from an outgoing tide.