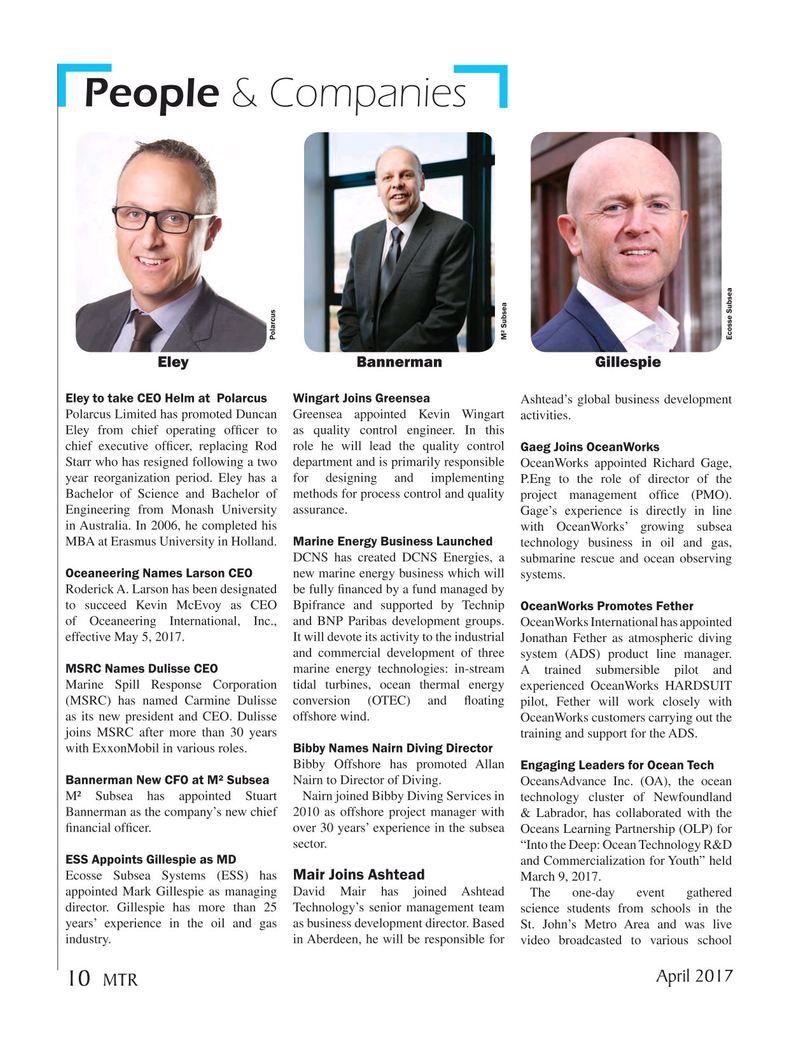 Eley from chief operating of? cer to as quality control engineer. In this chief executive of? cer, replacing Rod role he will lead the quality control Gaeg Joins OceanWorks

Starr who has resigned following a two department and is primarily responsible OceanWorks appointed Richard Gage, year reorganization period. Eley has a for designing and implementing P.Eng to the role of director of the

Bachelor of Science and Bachelor of methods for process control and quality project management of? ce (PMO).

Engineering from Monash University assurance. Gage’s experience is directly in line in Australia. In 2006, he completed his with OceanWorks’ growing subsea

Roderick A. Larson has been designated be fully ? nanced by a fund managed by to succeed Kevin McEvoy as CEO Bpifrance and supported by Technip OceanWorks Promotes Fether of Oceaneering International, Inc., and BNP Paribas development groups. OceanWorks International has appointed effective May 5, 2017. It will devote its activity to the industrial Jonathan Fether as atmospheric diving and commercial development of three system (ADS) product line manager.

Bannerman as the company’s new chief 2010 as offshore project manager with & Labrador, has collaborated with the ? nancial of? cer. over 30 years’ experience in the subsea Oceans Learning Partnership (OLP) for sector. “Into the Deep: Ocean Technology R&D

ESS Appoints Gillespie as MD and Commercialization for Youth” held

appointed Mark Gillespie as managing David Mair has joined Ashtead The one-day event gathered director. Gillespie has more than 25 Technology’s senior management team science students from schools in the years’ experience in the oil and gas as business development director. Based St. John’s Metro Area and was live industry. in Aberdeen, he will be responsible for video broadcasted to various school 2017 April 10 MTR