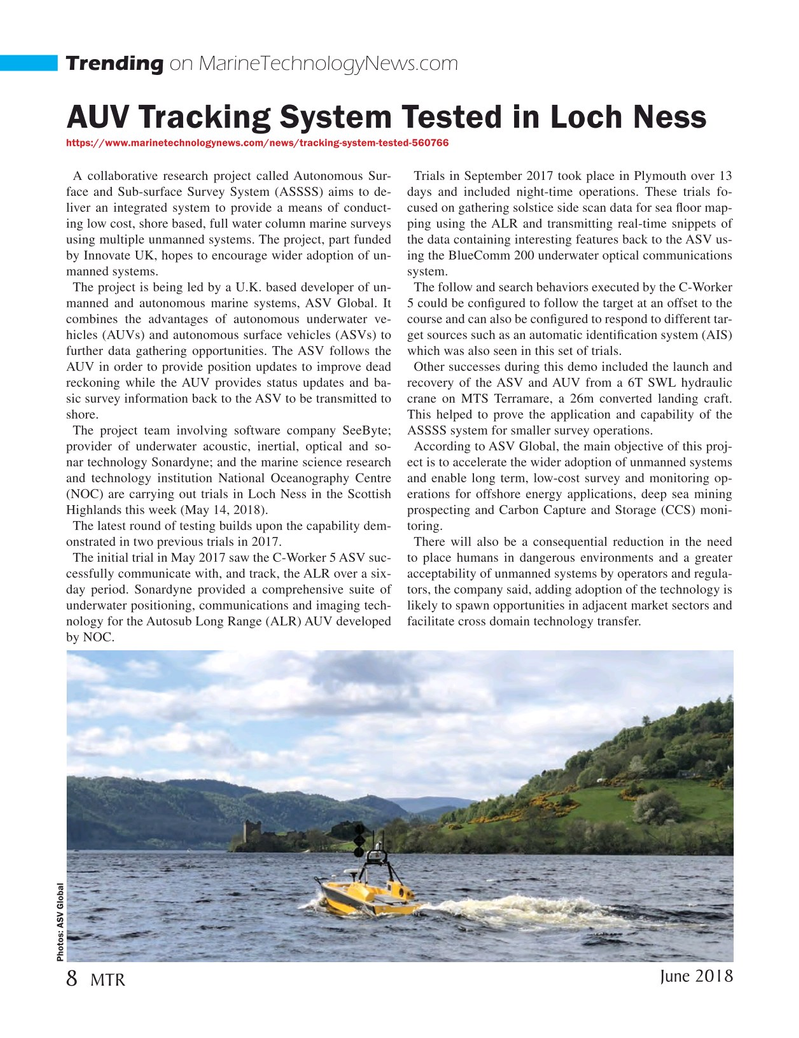 The project is being led by a U.K. based developer of un- The follow and search behaviors executed by the C-Worker manned and autonomous marine systems, ASV Global. It 5 could be con? gured to follow the target at an offset to the combines the advantages of autonomous underwater ve- course and can also be con? gured to respond to different tar- hicles (AUVs) and autonomous surface vehicles (ASVs) to get sources such as an automatic identi? cation system (AIS) further data gathering opportunities. The ASV follows the which was also seen in this set of trials.

AUV in order to provide position updates to improve dead Other successes during this demo included the launch and reckoning while the AUV provides status updates and ba- recovery of the ASV and AUV from a 6T SWL hydraulic sic survey information back to the ASV to be transmitted to crane on MTS Terramare, a 26m converted landing craft. shore. This helped to prove the application and capability of the

provider of underwater acoustic, inertial, optical and so- According to ASV Global, the main objective of this proj- nar technology Sonardyne; and the marine science research ect is to accelerate the wider adoption of unmanned systems and technology institution National Oceanography Centre and enable long term, low-cost survey and monitoring op- (NOC) are carrying out trials in Loch Ness in the Scottish erations for offshore energy applications, deep sea mining

Highlands this week (May 14, 2018). prospecting and Carbon Capture and Storage (CCS) moni-

The latest round of testing builds upon the capability dem- toring.

onstrated in two previous trials in 2017. There will also be a consequential reduction in the need

The initial trial in May 2017 saw the C-Worker 5 ASV suc- to place humans in dangerous environments and a greater cessfully communicate with, and track, the ALR over a six- acceptability of unmanned systems by operators and regula- day period. Sonardyne provided a comprehensive suite of tors, the company said, adding adoption of the technology is underwater positioning, communications and imaging tech- likely to spawn opportunities in adjacent market sectors and nology for the Autosub Long Range (ALR) AUV developed facilitate cross domain technology transfer.