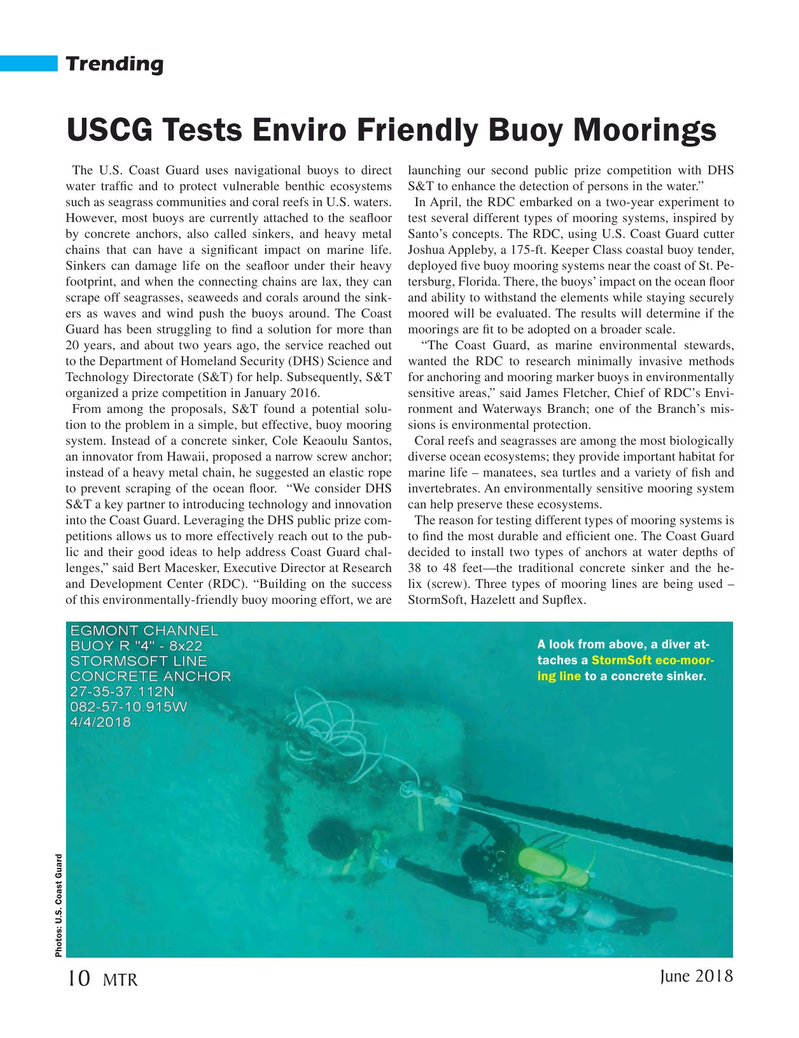 The U.S. Coast Guard uses navigational buoys to direct launching our second public prize competition with DHS water traf? c and to protect vulnerable benthic ecosystems S&T to enhance the detection of persons in the water.” such as seagrass communities and coral reefs in U.S. waters. In April, the RDC embarked on a two-year experiment to

Sinkers can damage life on the sea? oor under their heavy deployed ? ve buoy mooring systems near the coast of St. Pe- footprint, and when the connecting chains are lax, they can tersburg, Florida. There, the buoys’ impact on the ocean ? oor scrape off seagrasses, seaweeds and corals around the sink- and ability to withstand the elements while staying securely ers as waves and wind push the buoys around. The Coast moored will be evaluated. The results will determine if the

Guard has been struggling to ? nd a solution for more than moorings are ? t to be adopted on a broader scale. 20 years, and about two years ago, the service reached out “The Coast Guard, as marine environmental stewards, to the Department of Homeland Security (DHS) Science and wanted the RDC to research minimally invasive methods

From among the proposals, S&T found a potential solu- ronment and Waterways Branch; one of the Branch’s mis- tion to the problem in a simple, but effective, buoy mooring sions is environmental protection.

system. Instead of a concrete sinker, Cole Keaoulu Santos, Coral reefs and seagrasses are among the most biologically an innovator from Hawaii, proposed a narrow screw anchor; diverse ocean ecosystems; they provide important habitat for instead of a heavy metal chain, he suggested an elastic rope marine life – manatees, sea turtles and a variety of ? sh and to prevent scraping of the ocean ? oor. “We consider DHS invertebrates. An environmentally sensitive mooring system

S&T a key partner to introducing technology and innovation can help preserve these ecosystems. into the Coast Guard. Leveraging the DHS public prize com- The reason for testing different types of mooring systems is petitions allows us to more effectively reach out to the pub- to ? nd the most durable and ef? cient one. The Coast Guard lic and their good ideas to help address Coast Guard chal- decided to install two types of anchors at water depths of lenges,” said Bert Macesker, Executive Director at Research 38 to 48 feet—the traditional concrete sinker and the he- and Development Center (RDC). “Building on the success lix (screw). Three types of mooring lines are being used – of this environmentally-friendly buoy mooring effort, we are StormSoft, Hazelett and Sup? ex.

A look from above, a diver at- taches a StormSoft eco-moor- ing line to a concrete sinker.