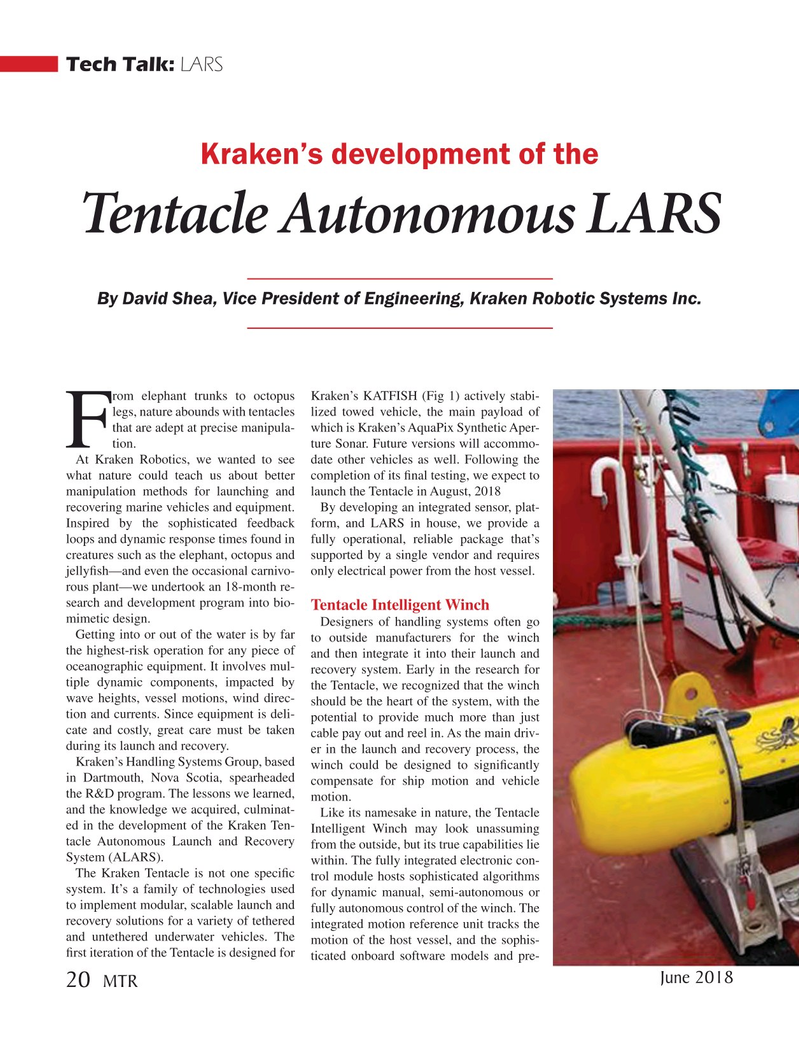 Kraken’s development of the

At Kraken Robotics, we wanted to see date other vehicles as well. Following the what nature could teach us about better completion of its ? nal testing, we expect to manipulation methods for launching and launch the Tentacle in August, 2018 recovering marine vehicles and equipment. By developing an integrated sensor, plat-

Inspired by the sophisticated feedback form, and LARS in house, we provide a loops and dynamic response times found in fully operational, reliable package that’s creatures such as the elephant, octopus and supported by a single vendor and requires jelly? sh—and even the occasional carnivo- only electrical power from the host vessel.

Getting into or out of the water is by far to outside manufacturers for the winch the highest-risk operation for any piece of and then integrate it into their launch and oceanographic equipment. It involves mul- recovery system. Early in the research for tiple dynamic components, impacted by the Tentacle, we recognized that the winch wave heights, vessel motions, wind direc- should be the heart of the system, with the tion and currents. Since equipment is deli- potential to provide much more than just cate and costly, great care must be taken cable pay out and reel in. As the main driv- during its launch and recovery.

er in the launch and recovery process, the

Kraken’s Handling Systems Group, based winch could be designed to signi? cantly in Dartmouth, Nova Scotia, spearheaded compensate for ship motion and vehicle the R&D program. The lessons we learned, motion. and the knowledge we acquired, culminat-

Like its namesake in nature, the Tentacle ed in the development of the Kraken Ten-

Intelligent Winch may look unassuming tacle Autonomous Launch and Recovery from the outside, but its true capabilities lie

The Kraken Tentacle is not one speci? c trol module hosts sophisticated algorithms system. It’s a family of technologies used for dynamic manual, semi-autonomous or to implement modular, scalable launch and fully autonomous control of the winch. The recovery solutions for a variety of tethered integrated motion reference unit tracks the and untethered underwater vehicles. The motion of the host vessel, and the sophis- ? rst iteration of the Tentacle is designed for ticated onboard software models and pre-