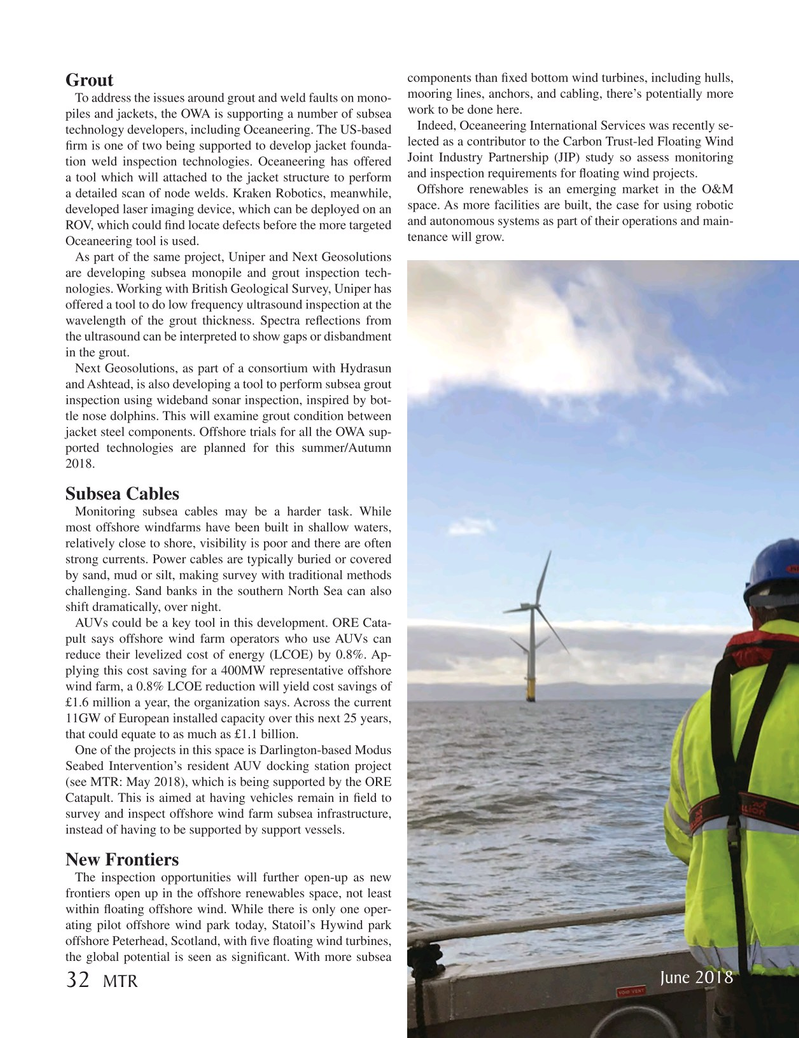 To address the issues around grout and weld faults on mono- piles and jackets, the OWA is supporting a number of subsea work to be done here.

Indeed, Oceaneering International Services was recently se- technology developers, including Oceaneering. The US-based lected as a contributor to the Carbon Trust-led Floating Wind ? rm is one of two being supported to develop jacket founda- tion weld inspection technologies. Oceaneering has offered Joint Industry Partnership (JIP) study so assess monitoring a tool which will attached to the jacket structure to perform and inspection requirements for ? oating wind projects.

Offshore renewables is an emerging market in the O&M a detailed scan of node welds. Kraken Robotics, meanwhile, space. As more facilities are built, the case for using robotic developed laser imaging device, which can be deployed on an and autonomous systems as part of their operations and main-

ROV, which could ? nd locate defects before the more targeted tenance will grow.

As part of the same project, Uniper and Next Geosolutions are developing subsea monopile and grout inspection tech- nologies. Working with British Geological Survey, Uniper has offered a tool to do low frequency ultrasound inspection at the wavelength of the grout thickness. Spectra re? ections from the ultrasound can be interpreted to show gaps or disbandment in the grout.

Next Geosolutions, as part of a consortium with Hydrasun and Ashtead, is also developing a tool to perform subsea grout inspection using wideband sonar inspection, inspired by bot- tle nose dolphins. This will examine grout condition between jacket steel components. Offshore trials for all the OWA sup- ported technologies are planned for this summer/Autumn 2018.

Monitoring subsea cables may be a harder task. While most offshore windfarms have been built in shallow waters, relatively close to shore, visibility is poor and there are often strong currents. Power cables are typically buried or covered by sand, mud or silt, making survey with traditional methods challenging. Sand banks in the southern North Sea can also shift dramatically, over night.

AUVs could be a key tool in this development. ORE Cata- pult says offshore wind farm operators who use AUVs can reduce their levelized cost of energy (LCOE) by 0.8%. Ap- plying this cost saving for a 400MW representative offshore wind farm, a 0.8% LCOE reduction will yield cost savings of £1.6 million a year, the organization says. Across the current 11GW of European installed capacity over this next 25 years, that could equate to as much as £1.1 billion.

One of the projects in this space is Darlington-based Modus

Seabed Intervention’s resident AUV docking station project (see MTR: May 2018), which is being supported by the ORE

Catapult. This is aimed at having vehicles remain in ? eld to survey and inspect offshore wind farm subsea infrastructure, instead of having to be supported by support vessels.

The inspection opportunities will further open-up as new frontiers open up in the offshore renewables space, not least within ? oating offshore wind. While there is only one oper- ating pilot offshore wind park today, Statoil’s Hywind park offshore Peterhead, Scotland, with ? ve ? oating wind turbines, the global potential is seen as signi? cant. With more subsea