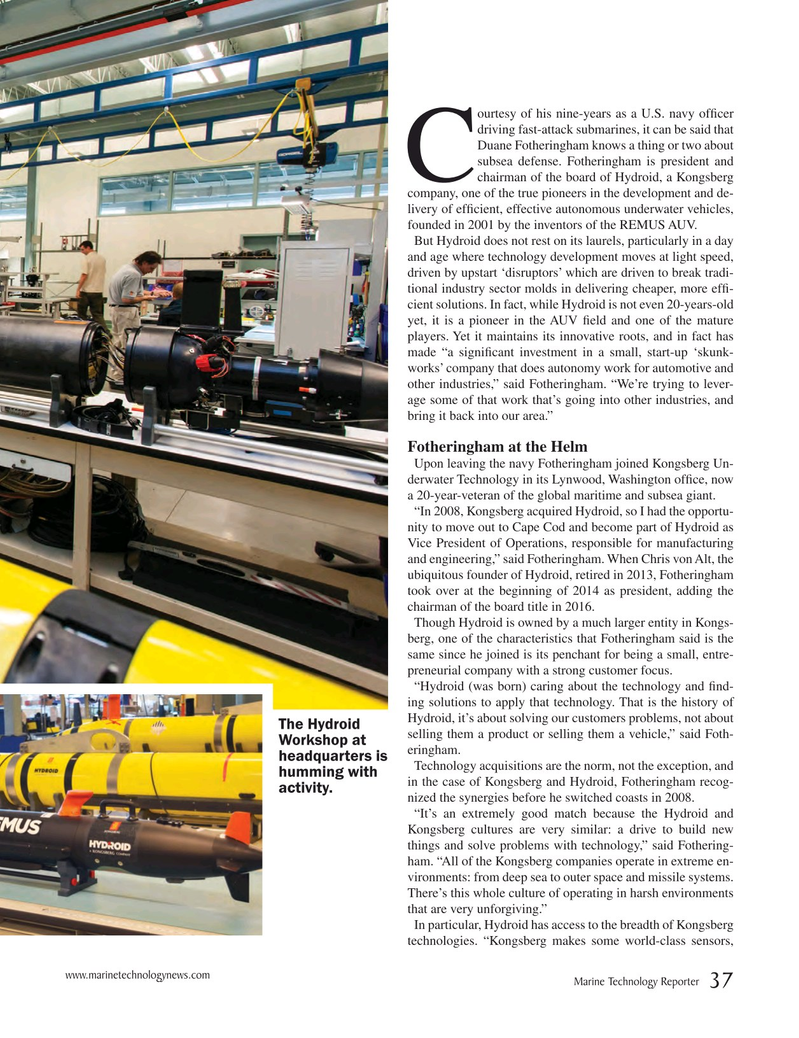 ourtesy of his nine-years as a U.S. navy of? cer driving fast-attack submarines, it can be said that

Cchairman of the board of Hydroid, a Kongsberg company, one of the true pioneers in the development and de- livery of ef? cient, effective autonomous underwater vehicles, founded in 2001 by the inventors of the REMUS AUV.

But Hydroid does not rest on its laurels, particularly in a day and age where technology development moves at light speed, driven by upstart ‘disruptors’ which are driven to break tradi- tional industry sector molds in delivering cheaper, more ef? - cient solutions. In fact, while Hydroid is not even 20-years-old yet, it is a pioneer in the AUV ? eld and one of the mature players. Yet it maintains its innovative roots, and in fact has made “a signi? cant investment in a small, start-up ‘skunk- works’ company that does autonomy work for automotive and other industries,” said Fotheringham. “We’re trying to lever- age some of that work that’s going into other industries, and bring it back into our area.”

Fotheringham at the Helm

Upon leaving the navy Fotheringham joined Kongsberg Un- derwater Technology in its Lynwood, Washington of? ce, now a 20-year-veteran of the global maritime and subsea giant.

“In 2008, Kongsberg acquired Hydroid, so I had the opportu- nity to move out to Cape Cod and become part of Hydroid as

Vice President of Operations, responsible for manufacturing and engineering,” said Fotheringham. When Chris von Alt, the ubiquitous founder of Hydroid, retired in 2013, Fotheringham took over at the beginning of 2014 as president, adding the chairman of the board title in 2016.

Though Hydroid is owned by a much larger entity in Kongs- berg, one of the characteristics that Fotheringham said is the same since he joined is its penchant for being a small, entre- preneurial company with a strong customer focus.

“Hydroid (was born) caring about the technology and ? nd- ing solutions to apply that technology. That is the history of

Hydroid, it’s about solving our customers problems, not about

Technology acquisitions are the norm, not the exception, and humming with in the case of Kongsberg and Hydroid, Fotheringham recog- activity.

nized the synergies before he switched coasts in 2008.

“It’s an extremely good match because the Hydroid and

Kongsberg cultures are very similar: a drive to build new things and solve problems with technology,” said Fothering- ham. “All of the Kongsberg companies operate in extreme en- vironments: from deep sea to outer space and missile systems.

There’s this whole culture of operating in harsh environments that are very unforgiving.”

In particular, Hydroid has access to the breadth of Kongsberg technologies. “Kongsberg makes some world-class sensors, www.marinetechnologynews.com