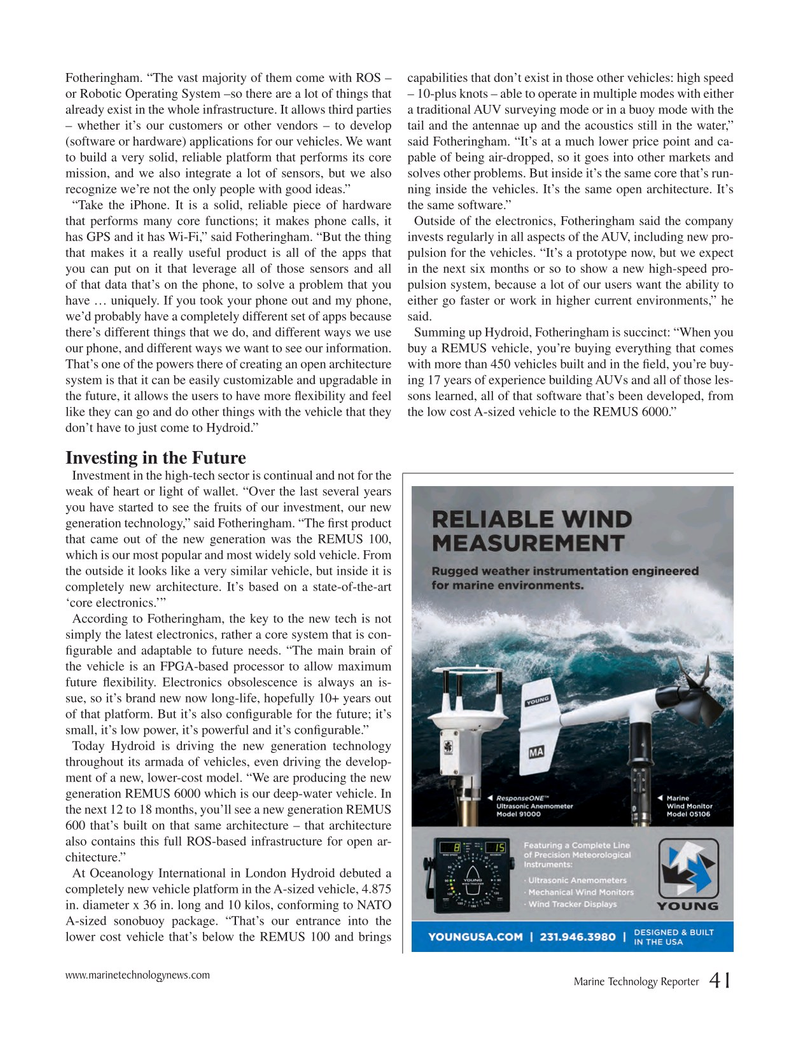 Fotheringham. “The vast majority of them come with ROS – capabilities that don’t exist in those other vehicles: high speed or Robotic Operating System –so there are a lot of things that – 10-plus knots – able to operate in multiple modes with either already exist in the whole infrastructure. It allows third parties a traditional AUV surveying mode or in a buoy mode with the – whether it’s our customers or other vendors – to develop tail and the antennae up and the acoustics still in the water,” (software or hardware) applications for our vehicles. We want said Fotheringham. “It’s at a much lower price point and ca- to build a very solid, reliable platform that performs its core pable of being air-dropped, so it goes into other markets and mission, and we also integrate a lot of sensors, but we also solves other problems. But inside it’s the same core that’s run- recognize we’re not the only people with good ideas.” ning inside the vehicles. It’s the same open architecture. It’s “Take the iPhone. It is a solid, reliable piece of hardware the same software.” that performs many core functions; it makes phone calls, it Outside of the electronics, Fotheringham said the company has GPS and it has Wi-Fi,” said Fotheringham. “But the thing invests regularly in all aspects of the AUV, including new pro- that makes it a really useful product is all of the apps that pulsion for the vehicles. “It’s a prototype now, but we expect you can put on it that leverage all of those sensors and all in the next six months or so to show a new high-speed pro- of that data that’s on the phone, to solve a problem that you pulsion system, because a lot of our users want the ability to have … uniquely. If you took your phone out and my phone, either go faster or work in higher current environments,” he we’d probably have a completely different set of apps because said.