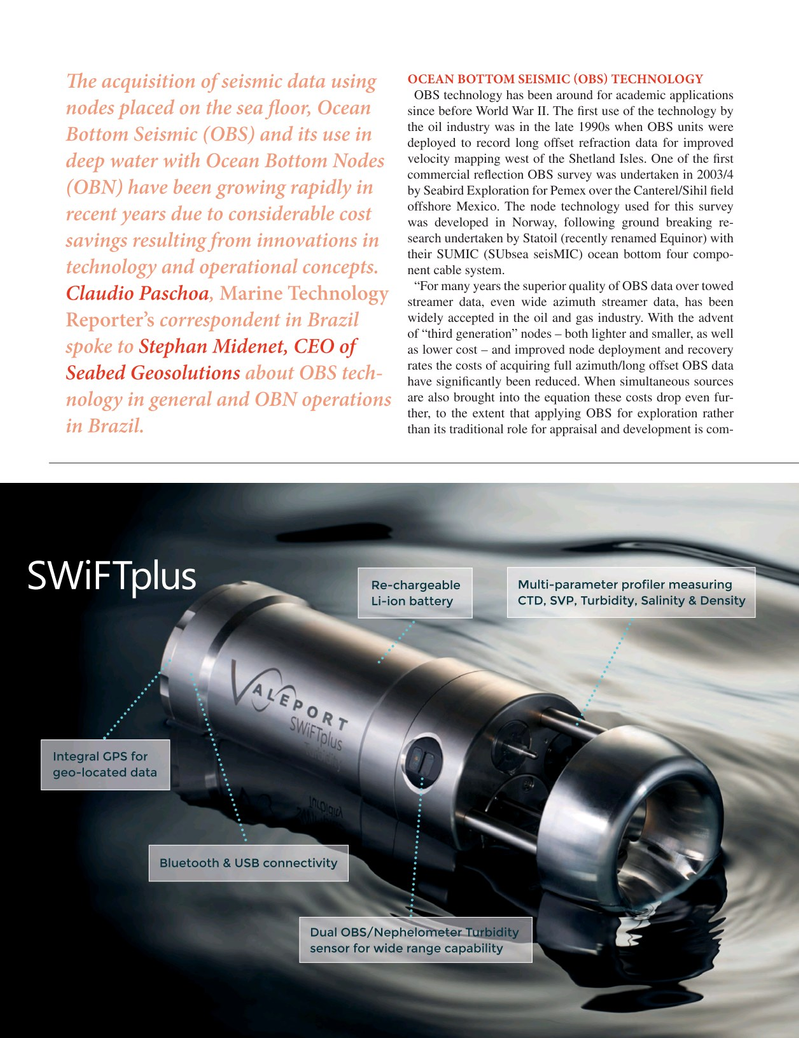 OBS technology has been around for academic applications nodes placed on the sea f oor, Ocean since before World War II. The ? rst use of the technology by the oil industry was in the late 1990s when OBS units were

Bottom Seismic (OBS) and its use in deployed to record long offset refraction data for improved velocity mapping west of the Shetland Isles. One of the ? rst deep water with Ocean Bottom Nodes commercial re? ection OBS survey was undertaken in 2003/4 (OBN) have been growing rapidly in by Seabird Exploration for Pemex over the Canterel/Sihil ? eld offshore Mexico. The node technology used for this survey recent years due to considerable cost was developed in Norway, following ground breaking re- search undertaken by Statoil (recently renamed Equinor) with savings resulting from innovations in their SUMIC (SUbsea seisMIC) ocean bottom four compo- technology and operational concepts. nent cable system. “For many years the superior quality of OBS data over towed

Claudio Paschoa, Marine Technology streamer data, even wide azimuth streamer data, has been widely accepted in the oil and gas industry. With the advent

Reporter’s correspondent in Brazil of “third generation” nodes – both lighter and smaller, as well spoke to Stephan Midenet, CEO of as lower cost – and improved node deployment and recovery rates the costs of acquiring full azimuth/long offset OBS data

Seabed Geosolutions about OBS tech- have signi? cantly been reduced. When simultaneous sources are also brought into the equation these costs drop even fur- nology in general and OBN operations ther, to the extent that applying OBS for exploration rather in Brazil.

than its traditional role for appraisal and development is com-