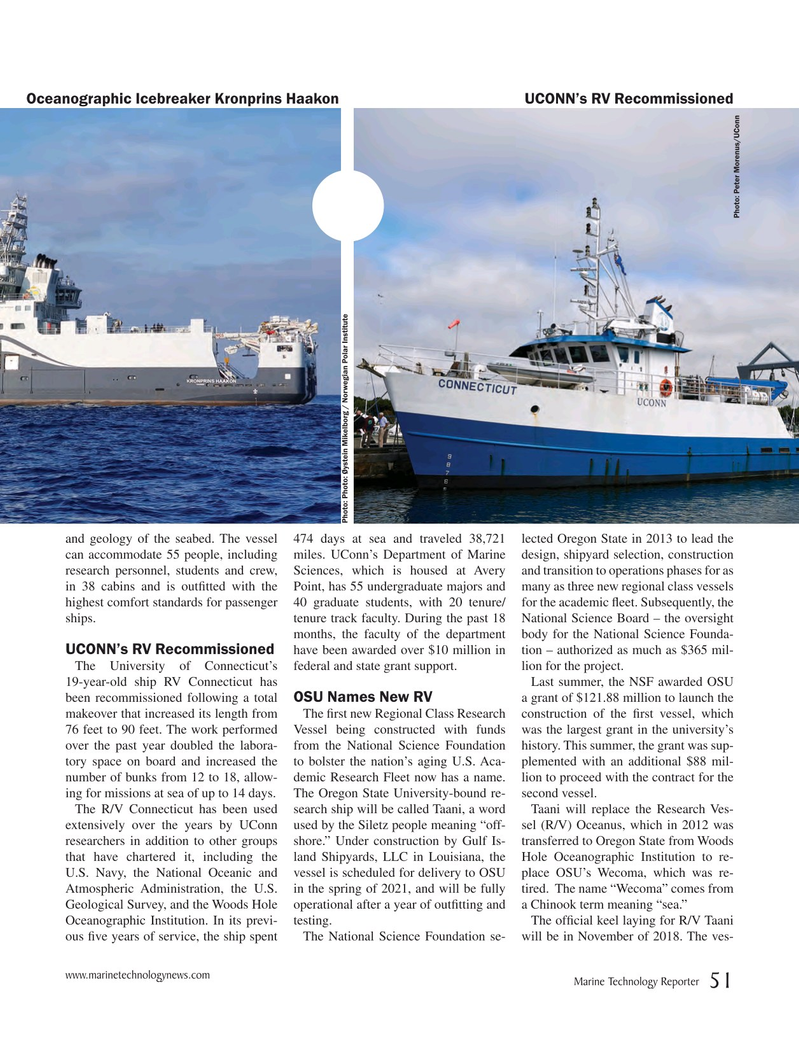 Photo: Photo: Øystein Mikelborg / Norwegian Polar Institute and geology of the seabed. The vessel 474 days at sea and traveled 38,721 lected Oregon State in 2013 to lead the can accommodate 55 people, including miles. UConn’s Department of Marine design, shipyard selection, construction research personnel, students and crew, Sciences, which is housed at Avery and transition to operations phases for as in 38 cabins and is out? tted with the Point, has 55 undergraduate majors and many as three new regional class vessels highest comfort standards for passenger 40 graduate students, with 20 tenure/ for the academic ? eet. Subsequently, the ships. tenure track faculty. During the past 18 National Science Board – the oversight months, the faculty of the department body for the National Science Founda-

The University of Connecticut’s federal and state grant support. lion for the project.

19-year-old ship RV Connecticut has Last summer, the NSF awarded OSU been recommissioned following a total a grant of $121.88 million to launch the OSU Names New RV makeover that increased its length from The ? rst new Regional Class Research construction of the ? rst vessel, which 76 feet to 90 feet. The work performed Vessel being constructed with funds was the largest grant in the university’s over the past year doubled the labora- from the National Science Foundation history. This summer, the grant was sup- tory space on board and increased the to bolster the nation’s aging U.S. Aca- plemented with an additional $88 mil- number of bunks from 12 to 18, allow- demic Research Fleet now has a name. lion to proceed with the contract for the ing for missions at sea of up to 14 days. The Oregon State University-bound re- second vessel.

The R/V Connecticut has been used search ship will be called Taani, a word Taani will replace the Research Ves- extensively over the years by UConn used by the Siletz people meaning “off- sel (R/V) Oceanus, which in 2012 was researchers in addition to other groups shore.” Under construction by Gulf Is- transferred to Oregon State from Woods that have chartered it, including the land Shipyards, LLC in Louisiana, the Hole Oceanographic Institution to re-

U.S. Navy, the National Oceanic and vessel is scheduled for delivery to OSU place OSU’s Wecoma, which was re-

Atmospheric Administration, the U.S. in the spring of 2021, and will be fully tired. The name “Wecoma” comes from

Geological Survey, and the Woods Hole operational after a year of out? tting and a Chinook term meaning “sea.”

Oceanographic Institution. In its previ- testing. The of? cial keel laying for R/V Taani ous ? ve years of service, the ship spent The National Science Foundation se- will be in November of 2018. The ves- www.marinetechnologynews.com