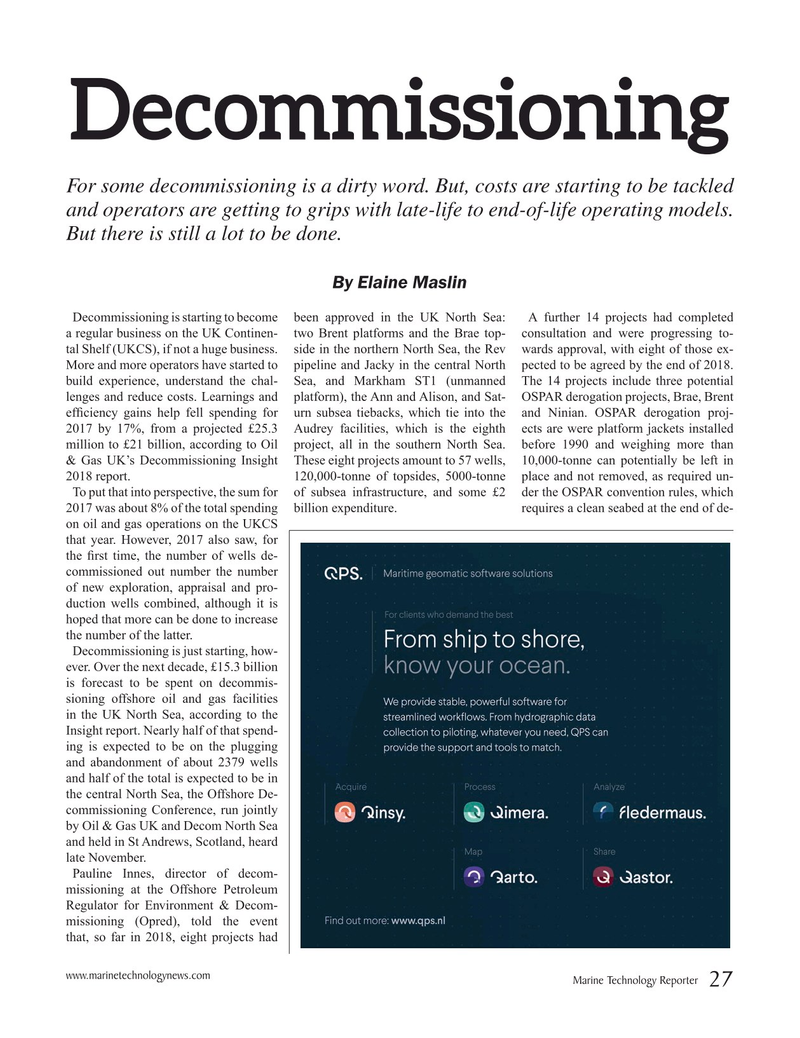 For some decommissioning is a dirty word. But, costs are starting to be tackled and operators are getting to grips with late-life to end-of-life operating models.

But there is still a lot to be done.

Decommissioning is starting to become been approved in the UK North Sea: A further 14 projects had completed a regular business on the UK Continen- two Brent platforms and the Brae top- consultation and were progressing to- tal Shelf (UKCS), if not a huge business. side in the northern North Sea, the Rev wards approval, with eight of those ex-

More and more operators have started to pipeline and Jacky in the central North pected to be agreed by the end of 2018. build experience, understand the chal- Sea, and Markham ST1 (unmanned The 14 projects include three potential lenges and reduce costs. Learnings and platform), the Ann and Alison, and Sat- OSPAR derogation projects, Brae, Brent ef? ciency gains help fell spending for urn subsea tiebacks, which tie into the and Ninian. OSPAR derogation proj- 2017 by 17%, from a projected £25.3 Audrey facilities, which is the eighth ects are were platform jackets installed million to £21 billion, according to Oil project, all in the southern North Sea. before 1990 and weighing more than & Gas UK’s Decommissioning Insight These eight projects amount to 57 wells, 10,000-tonne can potentially be left in 2018 report. 120,000-tonne of topsides, 5000-tonne place and not removed, as required un-

To put that into perspective, the sum for of subsea infrastructure, and some £2 der the OSPAR convention rules, which 2017 was about 8% of the total spending billion expenditure. requires a clean seabed at the end of de- on oil and gas operations on the UKCS that year. However, 2017 also saw, for the ? rst time, the number of wells de- commissioned out number the number of new exploration, appraisal and pro- duction wells combined, although it is hoped that more can be done to increase the number of the latter.

Decommissioning is just starting, how- ever. Over the next decade, £15.3 billion is forecast to be spent on decommis- sioning offshore oil and gas facilities in the UK North Sea, according to the

Insight report. Nearly half of that spend- ing is expected to be on the plugging and abandonment of about 2379 wells and half of the total is expected to be in the central North Sea, the Offshore De- commissioning Conference, run jointly by Oil & Gas UK and Decom North Sea and held in St Andrews, Scotland, heard late November.

Pauline Innes, director of decom- missioning at the Offshore Petroleum

Regulator for Environment & Decom- missioning (Opred), told the event that, so far in 2018, eight projects had www.marinetechnologynews.com