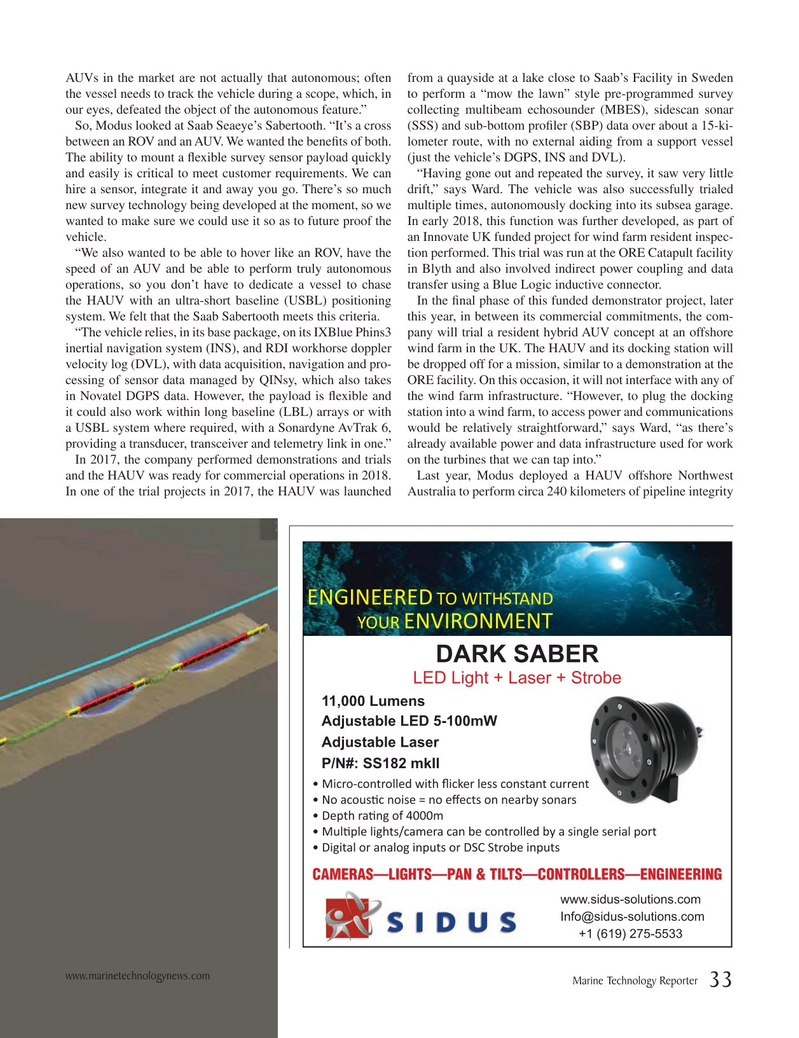 AUVs in the market are not actually that autonomous; often from a quayside at a lake close to Saab’s Facility in Sweden the vessel needs to track the vehicle during a scope, which, in to perform a “mow the lawn” style pre-programmed survey our eyes, defeated the object of the autonomous feature.” collecting multibeam echosounder (MBES), sidescan sonar

So, Modus looked at Saab Seaeye’s Sabertooth. “It’s a cross (SSS) and sub-bottom pro? ler (SBP) data over about a 15-ki- between an ROV and an AUV. We wanted the bene? ts of both. lometer route, with no external aiding from a support vessel

The ability to mount a ? exible survey sensor payload quickly (just the vehicle’s DGPS, INS and DVL). and easily is critical to meet customer requirements. We can “Having gone out and repeated the survey, it saw very little hire a sensor, integrate it and away you go. There’s so much drift,” says Ward. The vehicle was also successfully trialed new survey technology being developed at the moment, so we multiple times, autonomously docking into its subsea garage. wanted to make sure we could use it so as to future proof the In early 2018, this function was further developed, as part of vehicle. an Innovate UK funded project for wind farm resident inspec- “We also wanted to be able to hover like an ROV, have the tion performed. This trial was run at the ORE Catapult facility speed of an AUV and be able to perform truly autonomous in Blyth and also involved indirect power coupling and data operations, so you don’t have to dedicate a vessel to chase transfer using a Blue Logic inductive connector.

the HAUV with an ultra-short baseline (USBL) positioning In the ? nal phase of this funded demonstrator project, later system. We felt that the Saab Sabertooth meets this criteria. this year, in between its commercial commitments, the com- “The vehicle relies, in its base package, on its IXBlue Phins3 pany will trial a resident hybrid AUV concept at an offshore inertial navigation system (INS), and RDI workhorse doppler wind farm in the UK. The HAUV and its docking station will velocity log (DVL), with data acquisition, navigation and pro- be dropped off for a mission, similar to a demonstration at the cessing of sensor data managed by QINsy, which also takes ORE facility. On this occasion, it will not interface with any of in Novatel DGPS data. However, the payload is ? exible and the wind farm infrastructure. “However, to plug the docking it could also work within long baseline (LBL) arrays or with station into a wind farm, to access power and communications a USBL system where required, with a Sonardyne AvTrak 6, would be relatively straightforward,” says Ward, “as there’s providing a transducer, transceiver and telemetry link in one.” already available power and data infrastructure used for work

In 2017, the company performed demonstrations and trials on the turbines that we can tap into.” and the HAUV was ready for commercial operations in 2018. Last year, Modus deployed a HAUV offshore Northwest

In one of the trial projects in 2017, the HAUV was launched Australia to perform circa 240 kilometers of pipeline integrity

ENGINEERED TO WITHSTAND YOUR ENVIRONMENT