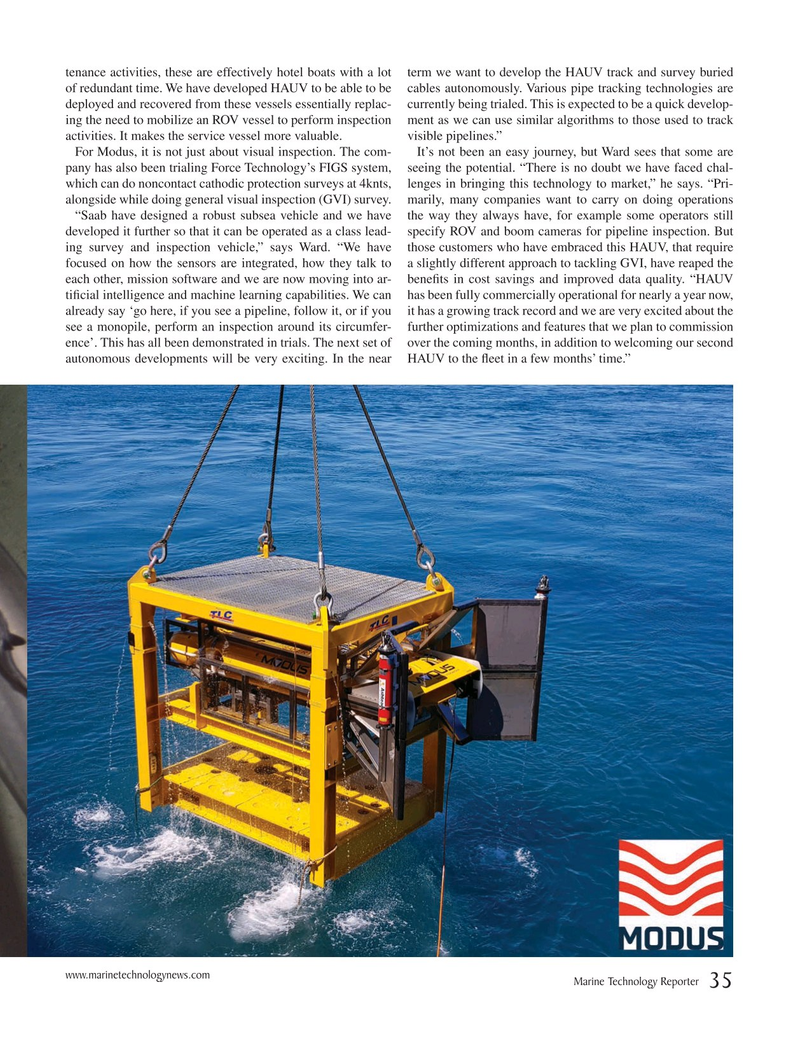 tenance activities, these are effectively hotel boats with a lot term we want to develop the HAUV track and survey buried of redundant time. We have developed HAUV to be able to be cables autonomously. Various pipe tracking technologies are deployed and recovered from these vessels essentially replac- currently being trialed. This is expected to be a quick develop- ing the need to mobilize an ROV vessel to perform inspection ment as we can use similar algorithms to those used to track activities. It makes the service vessel more valuable. visible pipelines.”

For Modus, it is not just about visual inspection. The com- It’s not been an easy journey, but Ward sees that some are pany has also been trialing Force Technology’s FIGS system, seeing the potential. “There is no doubt we have faced chal- which can do noncontact cathodic protection surveys at 4knts, lenges in bringing this technology to market,” he says. “Pri- alongside while doing general visual inspection (GVI) survey. marily, many companies want to carry on doing operations “Saab have designed a robust subsea vehicle and we have the way they always have, for example some operators still developed it further so that it can be operated as a class lead- specify ROV and boom cameras for pipeline inspection. But ing survey and inspection vehicle,” says Ward. “We have those customers who have embraced this HAUV, that require focused on how the sensors are integrated, how they talk to a slightly different approach to tackling GVI, have reaped the each other, mission software and we are now moving into ar- bene? ts in cost savings and improved data quality. “HAUV ti? cial intelligence and machine learning capabilities. We can has been fully commercially operational for nearly a year now, already say ‘go here, if you see a pipeline, follow it, or if you it has a growing track record and we are very excited about the see a monopile, perform an inspection around its circumfer- further optimizations and features that we plan to commission ence’. This has all been demonstrated in trials. The next set of over the coming months, in addition to welcoming our second autonomous developments will be very exciting. In the near HAUV to the ? eet in a few months’ time.” www.marinetechnologynews.com