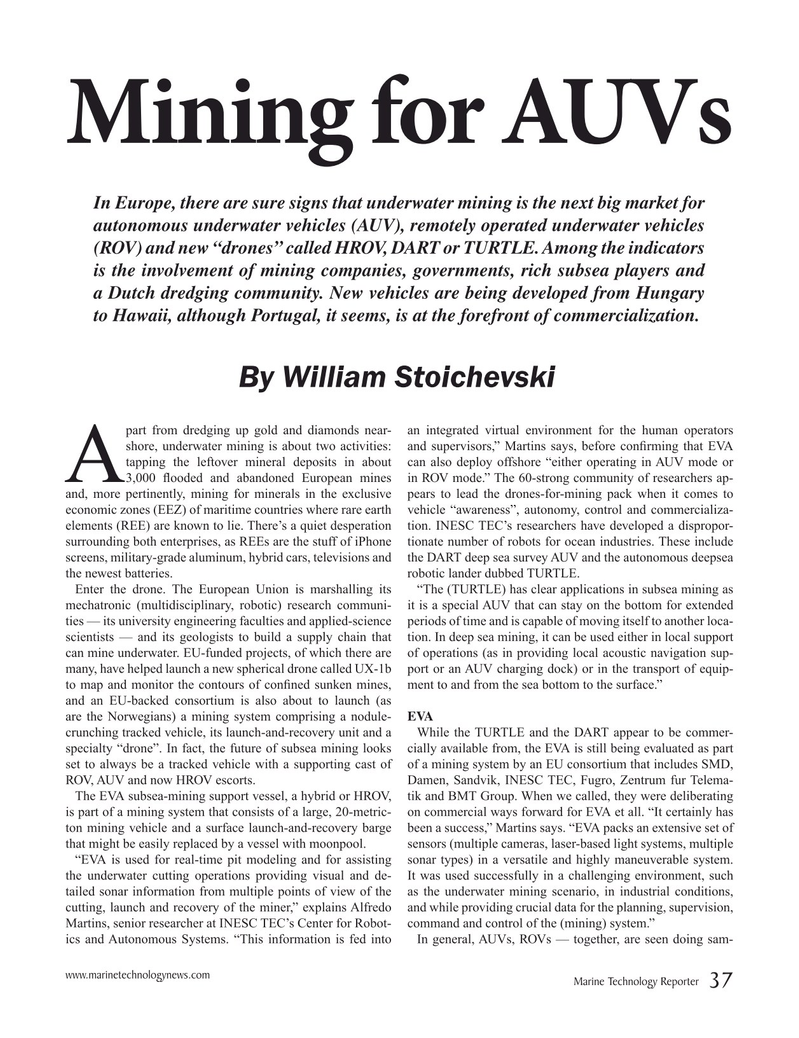 In Europe, there are sure signs that underwater mining is the next big market for autonomous underwater vehicles (AUV), remotely operated underwater vehicles (ROV) and new “drones” called HROV, DART or TURTLE. Among the indicators is the involvement of mining companies, governments, rich subsea players and a Dutch dredging community. New vehicles are being developed from Hungary to Hawaii, although Portugal, it seems, is at the forefront of commercialization.

By William Stoichevski part from dredging up gold and diamonds near- an integrated virtual environment for the human operators shore, underwater mining is about two activities: and supervisors,” Martins says, before con? rming that EVA tapping the leftover mineral deposits in about can also deploy offshore “either operating in AUV mode or

A3,000 ? ooded and abandoned European mines in ROV mode.” The 60-strong community of researchers ap- and, more pertinently, mining for minerals in the exclusive pears to lead the drones-for-mining pack when it comes to economic zones (EEZ) of maritime countries where rare earth vehicle “awareness”, autonomy, control and commercializa- elements (REE) are known to lie. There’s a quiet desperation tion. INESC TEC’s researchers have developed a dispropor- surrounding both enterprises, as REEs are the stuff of iPhone tionate number of robots for ocean industries. These include screens, military-grade aluminum, hybrid cars, televisions and the DART deep sea survey AUV and the autonomous deepsea the newest batteries. robotic lander dubbed TURTLE.

Enter the drone. The European Union is marshalling its “The (TURTLE) has clear applications in subsea mining as mechatronic (multidisciplinary, robotic) research communi- it is a special AUV that can stay on the bottom for extended ties — its university engineering faculties and applied-science periods of time and is capable of moving itself to another loca- scientists — and its geologists to build a supply chain that tion. In deep sea mining, it can be used either in local support can mine underwater. EU-funded projects, of which there are of operations (as in providing local acoustic navigation sup- many, have helped launch a new spherical drone called UX-1b port or an AUV charging dock) or in the transport of equip- to map and monitor the contours of con? ned sunken mines, ment to and from the sea bottom to the surface.” and an EU-backed consortium is also about to launch (as are the Norwegians) a mining system comprising a nodule- EVA crunching tracked vehicle, its launch-and-recovery unit and a While the TURTLE and the DART appear to be commer- specialty “drone”. In fact, the future of subsea mining looks cially available from, the EVA is still being evaluated as part set to always be a tracked vehicle with a supporting cast of of a mining system by an EU consortium that includes SMD,

The EVA subsea-mining support vessel, a hybrid or HROV, tik and BMT Group. When we called, they were deliberating is part of a mining system that consists of a large, 20-metric- on commercial ways forward for EVA et all. “It certainly has ton mining vehicle and a surface launch-and-recovery barge been a success,” Martins says. “EVA packs an extensive set of that might be easily replaced by a vessel with moonpool. sensors (multiple cameras, laser-based light systems, multiple “EVA is used for real-time pit modeling and for assisting sonar types) in a versatile and highly maneuverable system. the underwater cutting operations providing visual and de- It was used successfully in a challenging environment, such tailed sonar information from multiple points of view of the as the underwater mining scenario, in industrial conditions, cutting, launch and recovery of the miner,” explains Alfredo and while providing crucial data for the planning, supervision,

Martins, senior researcher at INESC TEC’s Center for Robot- command and control of the (mining) system.” ics and Autonomous Systems. “This information is fed into In general, AUVs, ROVs — together, are seen doing sam- www.marinetechnologynews.com