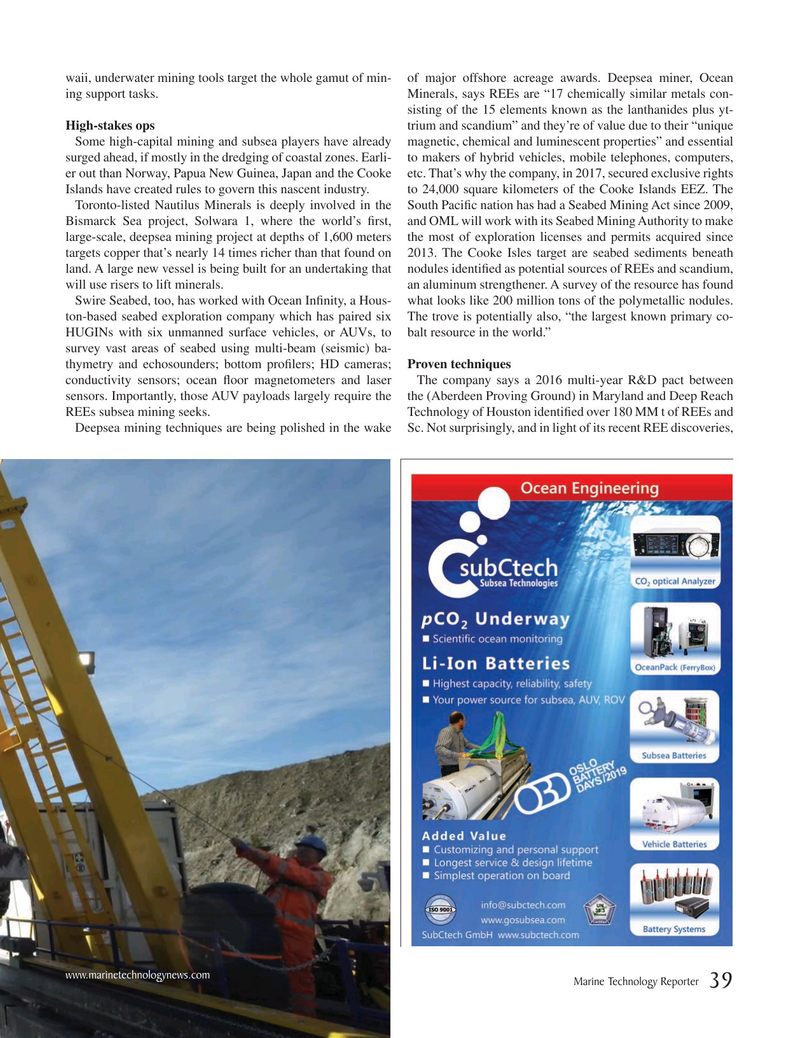 Some high-capital mining and subsea players have already magnetic, chemical and luminescent properties” and essential surged ahead, if mostly in the dredging of coastal zones. Earli- to makers of hybrid vehicles, mobile telephones, computers, er out than Norway, Papua New Guinea, Japan and the Cooke etc. That’s why the company, in 2017, secured exclusive rights

Islands have created rules to govern this nascent industry. to 24,000 square kilometers of the Cooke Islands EEZ. The

Toronto-listed Nautilus Minerals is deeply involved in the South Paci? c nation has had a Seabed Mining Act since 2009,

Bismarck Sea project, Solwara 1, where the world’s ? rst, and OML will work with its Seabed Mining Authority to make large-scale, deepsea mining project at depths of 1,600 meters the most of exploration licenses and permits acquired since targets copper that’s nearly 14 times richer than that found on 2013. The Cooke Isles target are seabed sediments beneath land. A large new vessel is being built for an undertaking that nodules identi? ed as potential sources of REEs and scandium, will use risers to lift minerals. an aluminum strengthener. A survey of the resource has found

Swire Seabed, too, has worked with Ocean In? nity, a Hous- what looks like 200 million tons of the polymetallic nodules. ton-based seabed exploration company which has paired six The trove is potentially also, “the largest known primary co-

Deepsea mining techniques are being polished in the wake Sc. Not surprisingly, and in light of its recent REE discoveries, www.marinetechnologynews.com