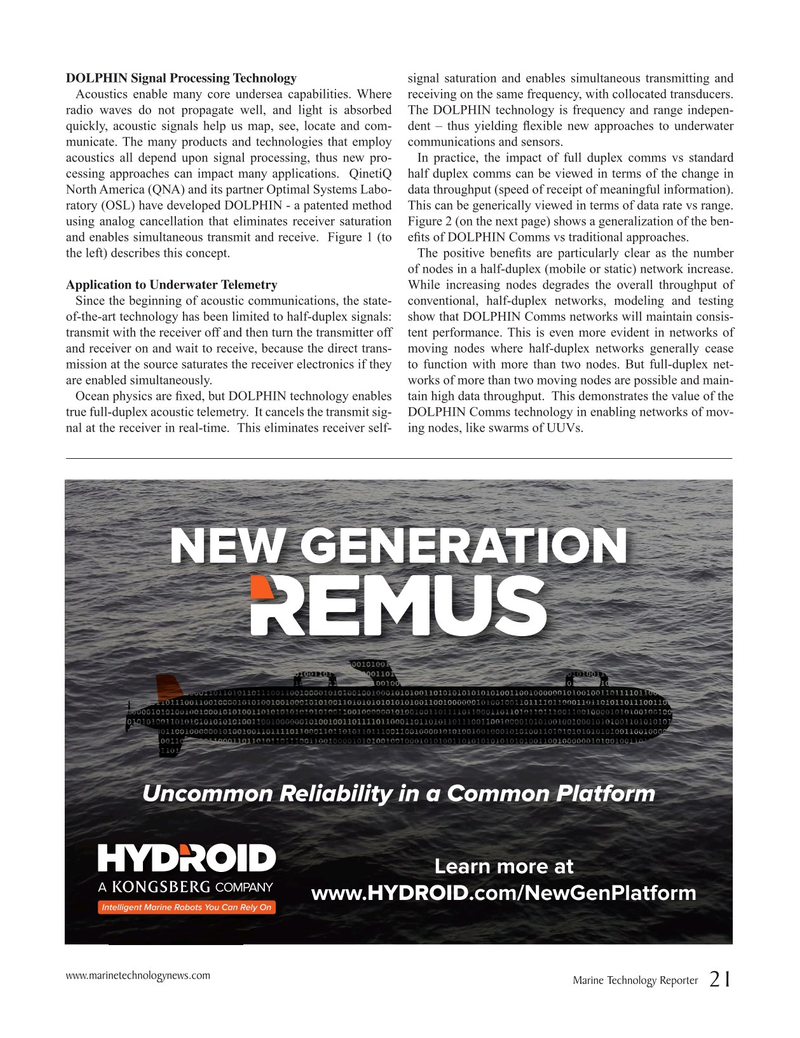 Acoustics enable many core undersea capabilities. Where receiving on the same frequency, with collocated transducers. radio waves do not propagate well, and light is absorbed The DOLPHIN technology is frequency and range indepen- quickly, acoustic signals help us map, see, locate and com- dent – thus yielding ? exible new approaches to underwater municate. The many products and technologies that employ communications and sensors. acoustics all depend upon signal processing, thus new pro- In practice, the impact of full duplex comms vs standard cessing approaches can impact many applications. QinetiQ half duplex comms can be viewed in terms of the change in

North America (QNA) and its partner Optimal Systems Labo- data throughput (speed of receipt of meaningful information). ratory (OSL) have developed DOLPHIN - a patented method This can be generically viewed in terms of data rate vs range. using analog cancellation that eliminates receiver saturation Figure 2 (on the next page) shows a generalization of the ben- and enables simultaneous transmit and receive. Figure 1 (to e? ts of DOLPHIN Comms vs traditional approaches. the left) describes this concept. The positive bene? ts are particularly clear as the number of nodes in a half-duplex (mobile or static) network increase.

Since the beginning of acoustic communications, the state- conventional, half-duplex networks, modeling and testing of-the-art technology has been limited to half-duplex signals: show that DOLPHIN Comms networks will maintain consis- transmit with the receiver off and then turn the transmitter off tent performance. This is even more evident in networks of and receiver on and wait to receive, because the direct trans- moving nodes where half-duplex networks generally cease mission at the source saturates the receiver electronics if they to function with more than two nodes. But full-duplex net- are enabled simultaneously. works of more than two moving nodes are possible and main-

Ocean physics are ? xed, but DOLPHIN technology enables tain high data throughput. This demonstrates the value of the true full-duplex acoustic telemetry. It cancels the transmit sig- DOLPHIN Comms technology in enabling networks of mov- nal at the receiver in real-time. This eliminates receiver self- ing nodes, like swarms of UUVs.