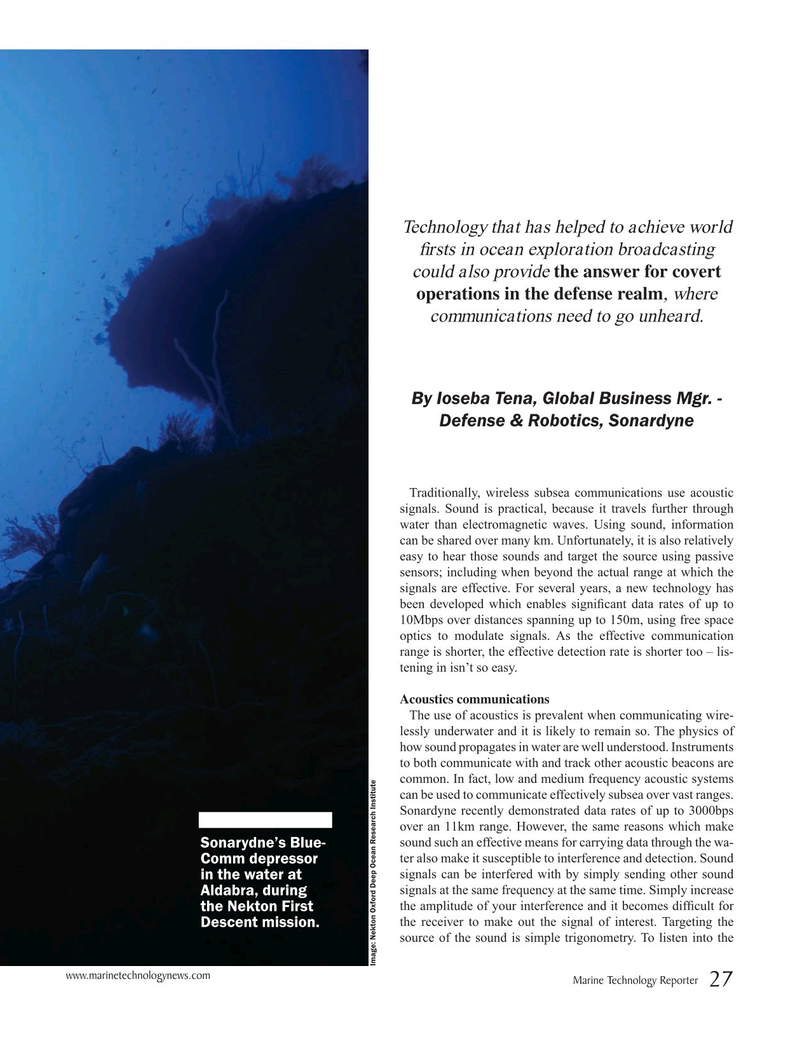 Technology that has helped to achieve world ? rsts in ocean exploration broadcasting could also provide the answer for covert operations in the defense realm, where communications need to go unheard.

Traditionally, wireless subsea communications use acoustic signals. Sound is practical, because it travels further through water than electromagnetic waves. Using sound, information can be shared over many km. Unfortunately, it is also relatively easy to hear those sounds and target the source using passive sensors; including when beyond the actual range at which the signals are effective. For several years, a new technology has been developed which enables signi? cant data rates of up to 10Mbps over distances spanning up to 150m, using free space optics to modulate signals. As the effective communication range is shorter, the effective detection rate is shorter too – lis- tening in isn’t so easy.

The use of acoustics is prevalent when communicating wire- lessly underwater and it is likely to remain so. The physics of how sound propagates in water are well understood. Instruments to both communicate with and track other acoustic beacons are common. In fact, low and medium frequency acoustic systems can be used to communicate effectively subsea over vast ranges.

Sonardyne recently demonstrated data rates of up to 3000bps over an 11km range. However, the same reasons which make sound such an effective means for carrying data through the wa-

Comm depressor signals can be interfered with by simply sending other sound in the water at signals at the same frequency at the same time. Simply increase

Aldabra, during the amplitude of your interference and it becomes dif? cult for the Nekton First the receiver to make out the signal of interest. Targeting the

Descent mission. source of the sound is simple trigonometry. To listen into the