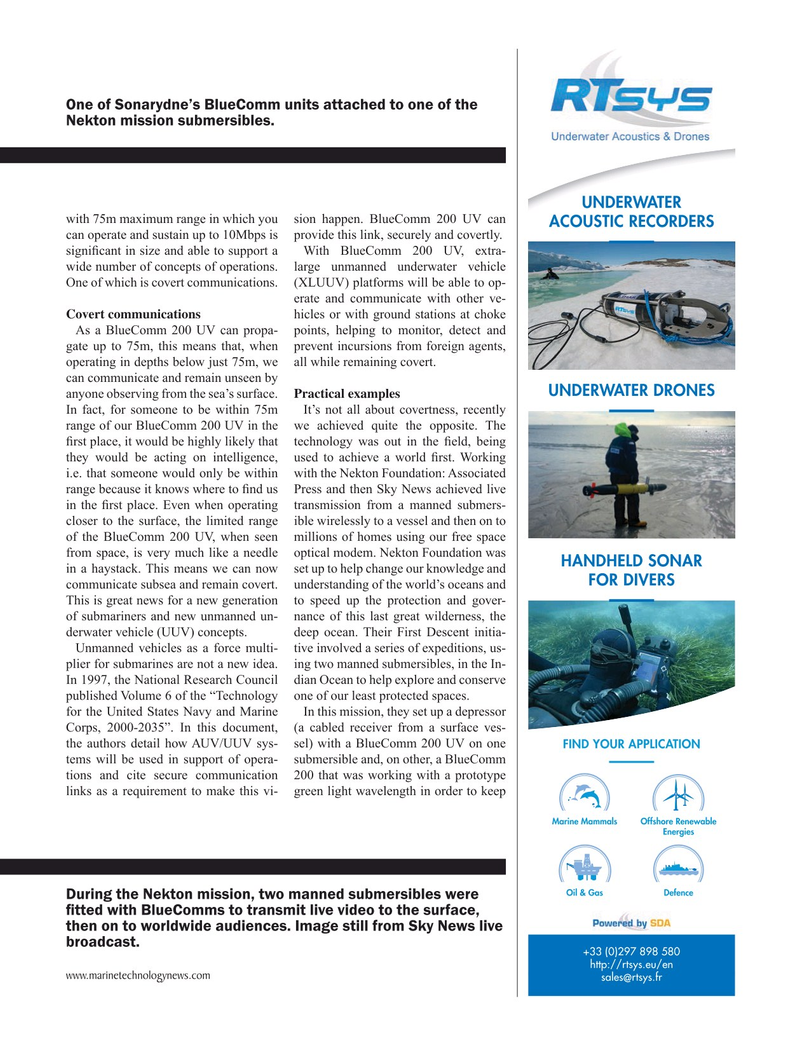 One of Sonarydne’s BlueComm units attached to one of the

UNDERWATER UNDERWATER with 75m maximum range in which you sion happen. BlueComm 200 UV can

ACOUSTIC RECORDERSACOUSTIC RECORDERS can operate and sustain up to 10Mbps is provide this link, securely and covertly. signi? cant in size and able to support a With BlueComm 200 UV, extra- wide number of concepts of operations. large unmanned underwater vehicle

One of which is covert communications. (XLUUV) platforms will be able to op- erate and communicate with other ve-

Covert communications hicles or with ground stations at choke

As a BlueComm 200 UV can propa- points, helping to monitor, detect and gate up to 75m, this means that, when prevent incursions from foreign agents, operating in depths below just 75m, we all while remaining covert.

can communicate and remain unseen by

UNDERWATER DRONES anyone observing from the sea’s surface. Practical examples

In fact, for someone to be within 75m It’s not all about covertness, recently range of our BlueComm 200 UV in the we achieved quite the opposite. The ? rst place, it would be highly likely that technology was out in the ? eld, being they would be acting on intelligence, used to achieve a world ? rst. Working i.e. that someone would only be within with the Nekton Foundation: Associated range because it knows where to ? nd us Press and then Sky News achieved live in the ? rst place. Even when operating transmission from a manned submers- closer to the surface, the limited range ible wirelessly to a vessel and then on to of the BlueComm 200 UV, when seen millions of homes using our free space from space, is very much like a needle optical modem. Nekton Foundation was

HANDHELD SONAR in a haystack. This means we can now set up to help change our knowledge and

FOR DIVERS communicate subsea and remain covert. understanding of the world’s oceans and

This is great news for a new generation to speed up the protection and gover- of submariners and new unmanned un- nance of this last great wilderness, the derwater vehicle (UUV) concepts. deep ocean. Their First Descent initia-

Unmanned vehicles as a force multi- tive involved a series of expeditions, us- plier for submarines are not a new idea. ing two manned submersibles, in the In-

In 1997, the National Research Council dian Ocean to help explore and conserve published Volume 6 of the “Technology one of our least protected spaces. for the United States Navy and Marine In this mission, they set up a depressor

FIND YOUR APPLICATION tems will be used in support of opera- submersible and, on other, a BlueComm tions and cite secure communication 200 that was working with a prototype links as a requirement to make this vi- green light wavelength in order to keep

During the Nekton mission, two manned submersibles were ? tted with BlueComms to transmit live video to the surface, then on to worldwide audiences. Image still from Sky News live broadcast.